A sad day for America 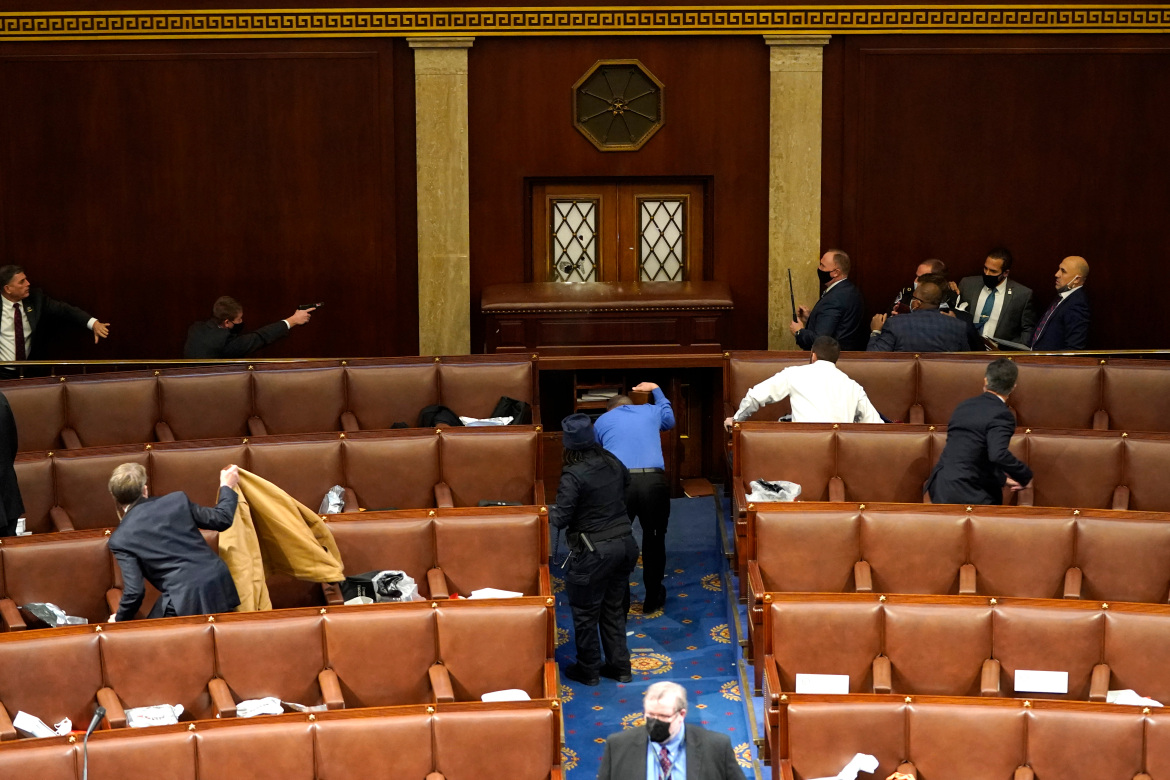 WASHINGTON, DC – JANUARY 06: U.S. Capitol police officers point their guns at a door that was vandalized in the House Chamber during a joint session of Congress on January 06, 2021 in Washington, DC. Congress held a joint session today to ratify President-elect Joe Biden’s 306-232 Electoral College win over President Donald Trump. A group of Republican senators said they would reject the Electoral College votes of several states unless Congress appointed a commission to audit the election results. Drew Angerer/Getty Images/AFP
Share:

President Trump bears personal responsibility for what happened on Wednesday .  He called his supporters to Washington.  He incited the crowd.  The mob upended democracy in one of the most serious breaches of Capitol security in the history of the republic. Those who stormed the Capitol may fashion themselves as patriots. They are not; they are anarchists . If these intruders were from another country, we would consider it a terrorist attack.

We lost something in America Wednesday.

Did we really see angry protesters swarm the United States Capitol, breach security and try to force their way into the House of Representatives chamber?

We are a republic, one that (supposedly) cherishes democracy, the rule of law, the peaceful transfer of power.

But that is not what we witnessed Wednesday, not even close.  We saw the worst of us.  We saw an insurrection.

I am drawing up Articles of Impeachment.

Donald J. Trump should be impeached by the House of Representatives & removed from office by the United States Senate.

We can’t allow him to remain in office, it’s a matter of preserving our Republic and we need to fulfill our oath.

Congress was following the Constitution and the law, going through the methodical and traditional process of confirming the results of the election.

That process was interrupted by hooligans, individuals who perverted our fundamental principles so they could somehow justify disruption and destruction.

We know that millions of Americans are upset with the outcome of the election.  That is understandable and predictable.  Additionally, peaceful protests are part of the American fabric and protected by the First Amendment.

And Donald Trump has the right to use the appropriate channels to challenge the results.  However, what is not acceptable is for Trump to continually perpetuate false conspiracy theories and whip up an already emotional crowd.

Yes, President Trump bears personal responsibility for what happened.  He called his supporters to Washington.  He incited the crowd.  The mob upended democracy in one of the most serious breaches of Capitol security in the history of the republic.

Trump’s accomplices are Republicans who know better, but gave Trump supporters false hope that the election results could be overturned.

The image of security forces inside the House chamber with guns drawn pointing through broken windows at protesters is now, tragically, part of our country’s legacy.  It is one that stands as a polar opposite to what our country has been and what we expect it to be.

Those who stormed the Capitol may fashion themselves as patriots. They are not; they are anarchists, and Trump was painfully slow to send out messages to try to make it stop, and when he finally did he reiterated the inflammatory accusations about a “stolen” election. These are his people and Trump was in a unique position to stop the violence.

Some of the protesters, when asked about storming the Capitol, said, “This is the people’s house.”   That is true, but that is not a license to justify breaking, entering, threating and upending legitimate and essential government functions.

Were these intruders from another country, we would consider it a terrorist attack.

What now?  Is this what the transition of power is going to look like in the years ahead?  If so, Wednesday will stand as the beginning of the end of democratic elections.