Has Lebanon become a police state? Lawyers strike to protest assault on colleague 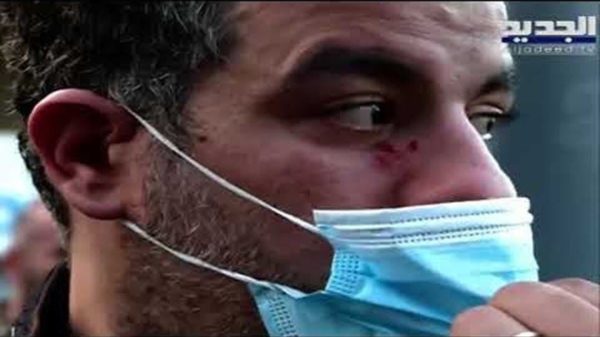 Lawyer Jimmy Hadchiti was beaten by the police after he came to the defense of his wife, journalist Carla Juha, after she was challenged by a security officer over a parking infraction on the outskirts of Beirut.
Share:

BEIRUT: Lawyers in Lebanon went on strike Monday in protest at an assault on a colleague who was arrested and beaten by security forces.

Jimmy Hadchiti came to the defense of his wife, journalist Carla Juha, after she was challenged by a security officer over a parking infraction on the outskirts of Beirut.

A video that was circulated on social media showed Juha and their children inside the vehicle screaming while Hadchiti was surrounded by members of the Internal Security Forces, his face bleeding.

Juha wrote that her husband was arrested by security forces even though he enjoyed Bar Association immunity. “Our collapsed state has become a police state,” she said.

“We went to the police station to file a complaint against the attacker, but the security man there again beat my husband. My husband was subjected to hours of investigation and arrest, although he was the one who was insulted and beaten in front of his children, and they placed handcuffs on his hands as if he were a criminal.”

The Beirut and Tripoli Bar Associations were quick to announce the suspension of work in all Lebanese courts, with the decision taking effect from Monday morning.

The Bar Association said that what happened was a “blatant transgression” of all legal principles by the judge in charge of investigations in the case.

“The arrest decision is a surreal decision that goes against all the moral foundations linking the lawyer with the judiciary, which is carrying out unclear desires and consolidating the grip of the security services on state institutions.”

Information Minister Manal Abdel Samad condemned the verbal assault that Juha was subjected to and the physical assault against her husband in front of their children.

“It is unacceptable for the security guards to turn into aggressors against dignities under any circumstances,” he said.

The Bar Association said the suspension of work would continue on Tuesday.

“If they want to prevent the lawyers from telling the truth, they (lawyers) will not be silent and will not submit to the mood of a judge or a security officer, and the lawyers will not be intimidated,” Melhem Khalaf, head of the Beirut Bar Association, told Arab News.

Hadchiti was released on Monday and wept when he arrived at the Bar Association headquarters.

He said: “I was insulted, and they hid all the surveillance cameras that were surrounding the place where the assault on me took place. It is a police time par excellence, and may God protect from what is to come. We will not remain silent after today.”

On Nov. 25, another lawyer, Ephrem Al-Halabi, was attacked by members of the Internal Security Forces after his arrest for a license plate violation.

The Lebanese Press Editors Syndicate said it too was protesting what Juha and her husband had been subjected to.