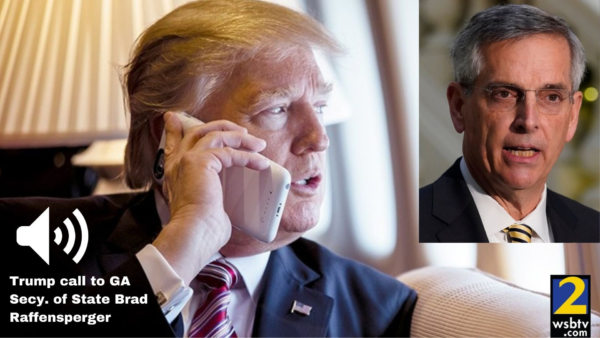 The Georgia secretary of state Brad Raffensperger who insists that two plus two still equals four had an hour long phone call from Donald Trump in which the president begged him to overturn election results
Share:

President Donald Trump begged Georgia’s secretary of state to overturn the election results in an astounding hourlong phone call obtained Sunday by NBC News in which the president offered a smorgasbord of false claims about voter fraud and repeatedly berated state officials.

“So look,” Trump told Secretary of State Brad Raffensperger. “All I want to do is this. I just want to find 11,780 votes, which is one more than we have. Because we won the state.”

Excerpts of the call, which took place Saturday, were first published Sunday by The Washington Post.

The phone call featured Trump, days before he is set to leave office, pleading with Raffensperger to alter the vote total and launching into a barrage of discredited conspiracy theories about the election. Trump even suggested that Raffensperger, who is a Republican, may face criminal consequences should he refuse to intervene in accordance with Trump’s wishes.

Raffensperger and his office’s general counsel, Ryan Germany, pushed back against Trump’s claims and said President-elect Joe Biden’s victory of more than 12,700 votes was accurate.

“The people of Georgia are angry. The people in the country are angry,” Trump said in the call. “And there’s nothing wrong with saying, you know, um, that you’ve recalculated.”

Raffensperger responded, “Well, Mr. President, the challenge that you have is the data you have is wrong.”

Since his loss in November’s election, Trump has sought to overturn the results by pushing state legislatures to appoint pro-Trump slates of electors and promoting legal efforts that have fallen short. He has also sought to press top Republican officials in states like Georgia and Arizona to disregard the outcomes of elections in their states, baselessly alleging widespread fraud.

“We now have irrefutable proof of a president pressuring and threatening an official of his own party to get him to rescind a state’s lawful, certified vote count and fabricate another in its place,” Biden senior adviser Bob Bauer said in a statement. “It captures the whole, disgraceful story about Donald Trump’s assault on American democracy.

At an event in Savannah, Georgia, Vice President-elect Kamala Harris referred to the call as “a bald, bald face, bold abuse of power by the president of the United States.”

A significant number of congressional Republicans will have said they will challenge the results Wednesday, although with the House in Democratic hands, they will not be able to overturn Biden’s win. Meanwhile, a number of other Republicans released statements this weekend pushing back against the efforts.

Other Trump allies were present on the phone call, including White House chief of staff Mark Meadows and attorney Cleta Mitchell.

Meadows at one point suggested that the secretary of state’s office and Trump’s team find a path forward to resolve the dispute that did not involve the courts. Raffensperger said he did not believe there was one.

Georgia has conducted multiple recounts and audits of the vote since November. Recently, an audit of signature matches in Cobb County found “no fraudulent absentee ballots,” Raffensperger’s office announced.

At one point in the call, Trump alleged that votes were scanned three times.

“You know, they put ’em in three times,” Trump said, a claim that Raffensperger said was untrue.

“We did an audit of that, and we proved conclusively that they were not scanned three times,” he said.

Trump also brought up a flurry of debunked conspiracy theories.

“Do you think it’s possible that they shredded ballots in Fulton County?” Trump said. “Because that is what the rumor is. And also that Dominion took out machines. That Dominion is really moving fast to get rid of their, uh, machinery. Do you know anything about that? Because that’s illegal.” Germany said none of those things happened.

At the onset of the call, Trump cited his widely attended rallies as one reason he does not believe he lost. But he failed to connect his large crowds to his repeated defiance of state and local guidelines about Covid-19. Biden largely avoided packed events for the same reason, hosting drive-in rallies and virtual gatherings instead.

“I think it’s pretty clear that we won. We won very substantially Georgia. You even see it by rally size. … We’ve been getting 25,000, 30,000 people to a rally, and the competition would get less than 100 people, and it never made sense.”

Raffensperger took issue with the numbers Trump presented. After Trump claimed that “thousands” of dead people voted, Raffensperger said that, in actuality, the number was two.

“Two people that were dead that voted,” he said. “And so that’s wrong.”

Another point of contention was over “a large number” of voters who Trump claimed did not live in Georgia. Germany explained that some were residents who moved back to Georgia years ago after having left.