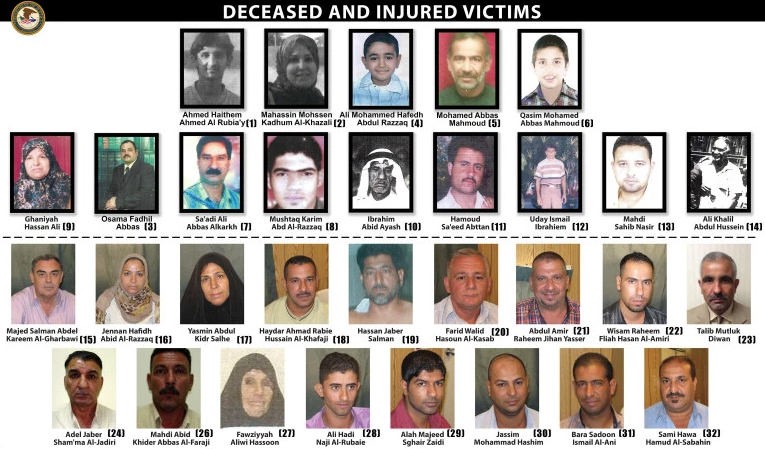 The Nisour Square massacre was one of the most publicized US crimes of the 8-year Iraq war. The Blackwater guards were escorting a diplomatic convoy when, without provocation, they opened fire in the crowded square with machine guns, grenade launchers and other weapons.
Share:

One of the four Blackwater security contractors pardoned last month by United States President Donald Trump has said he “acted correctly” during a 2007 shooting rampage in Iraq in which 14 civilians were killed and 17 others wounded.

In an exclusive interview with The Associated Press news agency, his first since being released from the prison, Evan Shawn Liberty said “I feel like I acted correctly” during the deadly shooting in Baghdad’s Nisour Square.

“I regret any innocent loss of life, but I’m just confident in how I acted and I can basically feel peace with that,” Liberty told AP.

The case sparked renewed criticism of the use of US contractors in conflict zones and Trump’s December 22 pardon of the four men has drawn widespread criticism from human rights advocates, lawyers and others in the US and Iraq.

US prosecutors have long maintained that the Blackwater employees, who were contracted by the US State Department in Iraq, launched an unprovoked attack on civilians involving sniper fire, machine guns and grenade launchers.

In a New York Times letter to the editor published on Friday, John Patarinithe, the FBI agent who led the investigation into the incident, said he “spent many hours with the innocent Iraqi victims who are permanently maimed and crippled because of the actions of these Blackwater guards, and the heartbroken family members of those killed”.

“I am embarrassed for our country,” he wrote. “I believe we will pay a heavy price in our relationships with other countries as a result of these pardons.”

For their part, the convicted contractors have said they were acting in self-defence and their lawyers have said the shooting began only after a white sedan broke from traffic and approached the convoy in what appeared to be a threatening way.

The sedan actually held a medical student and his mother.

Prosecutors have said one of the former contractors, Slatten, “was the first to fire, without provocation”. He was sentenced in 2019 to life in prison without parole for the murder of Ahmed Haithem Ahmed al-Rubia’y, the medical student who was driving his mother to an appointment.

Liberty, Slough and Heard were convicted of voluntary manslaughter, attempted manslaughter and other charges in a 2014 trial. After an appeal and resentencing, they were each given between 12- and 15-year prison terms.

‘A slap in the face’

Presidential pardons have historically been reserved for nonviolent crimes.

The most recent ones came amid a series of controversial Trump orders in the waning days of his administration, which ends on January 20. They include high-profile Trump allies charged as part of an investigation into the Trump campaign’s dealings with Russia, including campaign manager Paul Manafort and confidant Roger Stone.

On Thursday, a group of UN experts called Trump’s pardons of the Blackwater employees a violation of US obligations under international law.

Sarah Holewinksi, a Washington director at Human Rights Watch, told Al Jazeera in December that the pardons were an “insult to justice and an insult to the victims who waited so many years to see some measure of justice”.

Paul Dickinson, a litigation lawyer who represented six victims and their families in a civil lawsuit which was settled out of court in 2010, also said the pardons were “a slap in the face” to the victims.

In the AP interview, Liberty recounted being “dumbfounded” by the pardon, which he called a “second chance at life”.

He added he was unsure how he came to be pardoned, but said he has not spoken to Trump.

The cause of the convicted contractors has been championed by some right-wing figures in the US, including Fox News television personality Pete Hegseth, a US army veteran.

Erik Prince, the founder of the Blackwater company, which has since changed its name, is a supporter of Trump and has close ties to the White House. His sister, Betsy DeVos, is Trump’s education secretary.