The West will not help Lebanon because of Hezbollah’s role: Diab 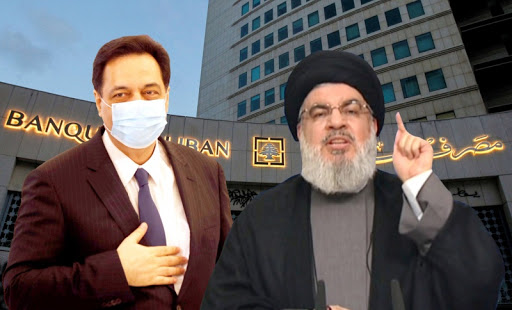 In an interview with Reuters Lebanon caretaker prime minister Hassan Diab  said Western officials had told him there was “an international decision” not to help Lebanon because of Iran-backed Hezbollah’s role in the country. He also said that Lebanon can stretch the $2 billion in reserves left for subsidies to last six more months , as the country’s financial meltdown raises fears of rising hunger.

Lebanon’s worst crisis since its 1975-1990 civil war has crashed the currency and sent inflation soaring. A looming end to subsidies has triggered U.N. warnings of “social catastrophe”..

In an interview with Reuters, Hassan Diab also said Western officials had told him there was “an international decision” not to help Lebanon because of Iran-backed Hezbollah’s role the country.

Diab said he only learned there was $2 billion in foreign reserves left for subsidies from TV comments Central Bank Governor Salameh made last week.

“I had asked him several times. Nothing official was received,” he said. Diab said the amount was higher than anticipated and would last “six months if we apply rationing”.

A central bank spokesman did not immediately respond to a request for comment.

Diab, who took office a year ago with Hezbollah’s backing, resigned in August over public fury at the port explosion that killed 200 people that month. His cabinet has since served in a caretaker role.

One of the biggest non-nuclear blasts on record, the disaster piled hardship on Lebanese already sinking into poverty.

As dollar inflows dried up, the central bank has drawn on foreign reserves to subsidise three key commodities – wheat, fuel and medicine – and some basic goods.

Diab, who cited dangerously low reserves when he declared Lebanon’s default this year, said he hoped for agreement by February on a plan to cut subsidy spending while supporting the poor.

“IT’S NOT YOU,” IT’S HEZBOLLAH

He said the cabinet sent parliament a week ago a report laying out four scenarios to replace subsidies with ration cards for 600,000 Lebanese families, or more than 2.5 million people.

The import-dependent country has an estimated population of six million, including at least a million Syrian refugees.

One of the options in the report included scrapping subsidies on fuel and wheat, but not flour, to give families $165 a month instead. It also cited “a need to ask for aid from donor states … because 2021 will be a tough year”.

Politicians, bickering for months over seats in the new government, have met rebuke, including from the World Bank, for failing to chart a way forward.

The central bank and the state have traded blame for the economic collapse. In response to criticism that nearly a year had gone by without a plan, Diab said his government had since faced multiple crises.

Foreign donors have made clear they will not bail out the state unless it launches reforms to tackle decades of graft, a root cause of the crisis. Gulf monarchies that once came to Lebanon’s rescue have also grown alarmed by Hezbollah’s expanding influence.

“They said it to me, the Americans and the Europeans: ‘it’s not you’ … but there’s an international decision to stop helping Lebanon,” Diab said. “Because they have a problem with Hezbollah.”

Along with three ex-ministers, Diab has faced charges of negligence over August’s explosion but has since declined to be questioned, accusing the investigating judge of overstepping his powers.

The U.S. FBI said in October it had reached no firm conclusion about what caused the blast.

Earlier on Tuesday, Diab’s office quoted him as saying the FBI probe had revealed that only 500 tonnes of ammonium nitrate had detonated out of the 2,750 tonnes stored unsafely at the port.

“Where did the (rest) go?” he said without answering his question.