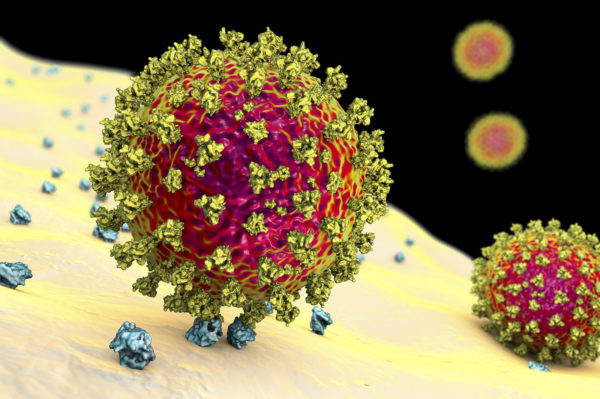 Covid-19 coronavirus binding to human cell, conceptual computer illustration. SARS-CoV-2 coronavirus (previously 2019-nCoV) binding to an ACE2 receptor on a human cell (not to scale). SARS-CoV-2 causes the respiratory infection Covid-19, which can lead to fatal pneumonia. ACE2 (angiotensin-converting enzyme 2) is a membrane-bound aminopeptidase, the key host receptor for the spike glycoprotein of SARS-CoV-2 which serves as initial step in the development of coronavirus infection on a cellular level and a potential target for treatment strategy.
Share:

A new variant of the coronavirus is sweeping through England. At the same time, the country is reporting a record-high number of COVID-19 cases – nearly 40,000 on Wednesday — as well as surges in hospitalizations and deaths. In London last week, an estimated 2% of people in private households tested positive for the coronavirus, The Independent reported.

So the big question is: Are these events connected? Is the new variant causing this surge?

Now British scientists are starting to answer that question. And the take-home message is sobering. The new variant, which contains 17 mutations, appears more transmissible and harder to control in terms of spread.

“Given all the biological and epidemiological evidence that has come together in the past few weeks, I think the picture is getting more and more consistent with something pretty serious,” says mathematical modeler Nick Davies, who led the study.

Davies is part of a group of scientists in the United Kingdom, called SPI-M, whose job is to use mathematical models to predict how diseases will spread in order to guide policymakers’ decisions.

Last week, when health officials announced the rise of this new variant, Davies was skeptical it was responsible for the surge in the U.K.: “Because one possible explanation for a rise in hospitalizations could just be that we’ve just come out of lockdown in these regions, and maybe people have gone back to more normal movement and contact.”

And besides, all viruses mutate. That’s normal. The vast majority of time the mutations are harmless. They don’t make the virus more dangerous.

But then a few days later, Davies watched a news presentation from South Africa, and his skepticism evaporated. COVID-19 is also surging there. At the same time, scientists there have detected a new variant, which shares surprisingly similarities with the U.K. one. Both versions contain a mutation called N501Y. This mutation has appeared in previous variants and is already known to increase how tightly the virus binds to human cells.

And so Davies went to work. He inserted the data on the new U.K. variant into computer models. He wanted to know why the new variant was spreading so quickly. He tested out four key hypotheses. Could the new variant:

The mathematical models, published online Wednesday but not yet peer-reviewed, pointed to one of these four hypotheses. “Increased transmissibility is the easiest way for us to explain what we’re seeing,” Davies says.

And scientists don’t know why this variant is likely more transmissible. Previous studies, with another variant, suggest the U.K. variant may infect human cells more easily. And it may generate more copies of itself inside a person. “When you swab people who have coronavirus infection, the people who are infected with this new variant tend to have more copies of the virus on the swab,” says Davies, who’s also part of the London School of Hygiene & Tropical Medicine.

No matter the underlying reason, policymakers should take this new variant very seriously, says epidemiologist Bill Hanage of the Harvard T.H. Chan School of Public Health. If it’s indeed 50% more transmissible, it will be difficult to stop its spread.

“Given the assumptions in their models, it’s really quite hard to avoid a situation very much like what happened last spring, in terms of hospital bed capacity and surges, without a very high rate of vaccination,” Hanage says.

That said, Hanage says there’s no reason for people to panic or be scared. “It’s not a magic virus,” he says — that’s the message virus expert Ian Mackay at the University of Queensland also wrote on Twitter.

“We have actually come across a large number of ways that we can use to stop it. However, we need to redouble our efforts in that direction.”

The variant will likely come to the U.S. — if isn’t here already. The study strongly suggests that people should be even more diligent about preventive measures: avoiding large gatherings. wearing masks, physical distancing and washing hands. On top of that, Hanage says, “the vaccine needs to be getting out at a very, very high rate.”

Because right now, scientists believe the vaccine will still be effective with this new variant. And Hanage says the quicker we immunize the vulnerable members of a community the safer the whole community will be from the original and future versions of the novel coronavirus.

Simply wearing a mask may not be enough to prevent the spread of COVID-19 without social distancing.

In Physics of Fluids, by AIP Publishing, researchers tested how five different types of mask materials impacted the spread of droplets that carry the coronavirus when we cough or sneeze.

Every material tested dramatically reduced the number of droplets that were spread. But at distances of less than 6 feet, enough droplets to potentially cause illness still made it through several of the materials.

“A mask definitely helps, but if the people are very close to each other, there is still a chance of spreading or contracting the virus,” said Krishna Kota, an associate professor at New Mexico State University and one of the article’s authors. “It’s not just masks that will help. It’s both the masks and distancing.”