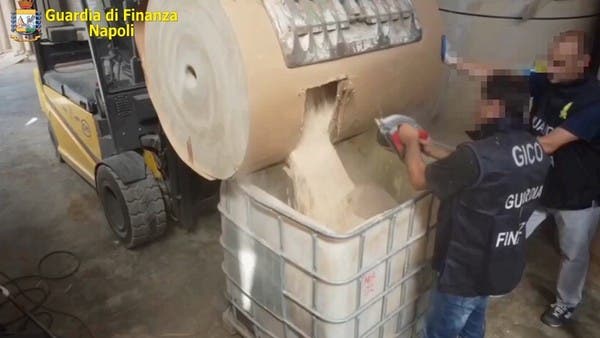 This Dec 20, 2020 photo by the Naples branch of the Italian Guardia di Finanza law enforcement agency shows a record seizure of 14 tons of amphetamines, in the form of 84 million captagon tablets produced in Syria and shipped by Hezbollah. (AFP)
Share:

The Italian authorities revealed that about 15 tons of Captagon amphetamine had been seized. After researching its origin, it appeared that the Lebanese Iran-backed Hezbollah was behind it, reported the Italian Nova news agency on Friday.

Prosecutor explained that the financial value of the drug amounts to about one billion dollars.

As part of an investigation broadcast by the BBC, the Italian Financial Crimes Unit provided details of that shipment, saying that it was coming from Syria and was seized last summer in an operation described as the largest of its kind.

The report revealed that the drugs’ source is Syria. The Italian authorities previously believed that ISIS was behind them. However, investigation operations showed that the Syrian regime and Hezbollah were behind it.

It is noteworthy that previous reports had shown that drug smuggling is one of the primary sources of income for Iran-backed Hezbollah.