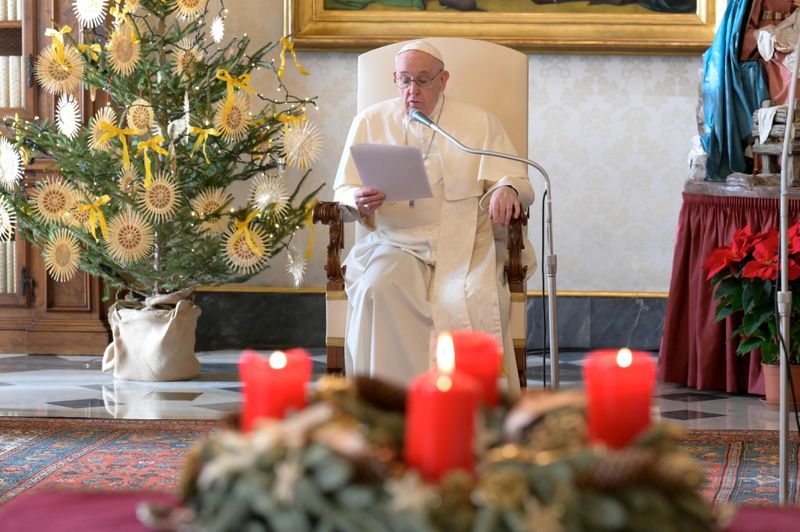 FILE PHOTO: Pope Francis holds the weekly general audience at the Library of the Apostolic Palace at the Vatican, December 23, 2020. Vatican Media/Handout via REUTERS
Share:

VATICAN CITY – Pope Francis promised in his Christmas messages on Thursday to visit Lebanon and South Sudan as soon as he could.

The pope traditionally mentions countries in his Christmas Day message, but he singled out those two nations with Christmas Eve messages because of difficulties each has faced this year.

“I am deeply troubled to see the suffering and anguish that has sapped the native resilience and resourcefulness of the Land of the Cedars,” Francis said, referring to Lebanon, which has been struggling with a deep economic crisis and the aftermath of the Beirut port explosion on Aug. 4 that killed about 200 people.

Victims are still awaiting the result of an investigation into blast the ruined a swathe of the capital.

Francis expressed “my affection for the beloved people of Lebanon, whom I hope to visit as soon as possible”.

He said he hoped the country could “stand apart from conflicts and regional tensions”.

He is already due to visit Iraq March 5-8.

In a separate message written jointly with Archbishop of Canterbury Justin Welby, who is the spiritual leader of the worldwide Anglican communion, and Church of Scotland moderator Martin Fair, the three church leaders committed to making a previously delayed trip to majority Christian South Sudan “as things return to normalcy.”

The message was addressed to South Sudan’s leaders, former rivals who formed a national unity government in February after years of civil war ravaged the oil-producing yet poor nation.

A U.N. report said this month that implementing various aspects of a peace accord had stalled in the country, where floods in September displaced hundreds of thousands of people.