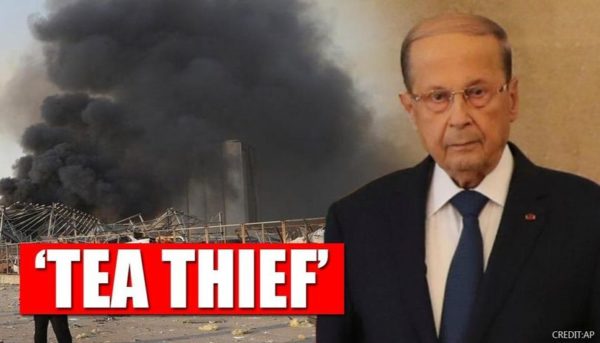 File photo- Lebanon’s President Michel Aoun is under fire for seizing Sri Lankan tea donated to Beirut blast victims and distributed it instead to families of his presidential guards.
Share:

On the occasion marking 103rd birthday of of his slain father Kamal Jumblatt (who was assassinated in 1977 by the Syrian regime) , Jumblatt said I cannot say it directly this is why I urge Patriarch Boutros al Rai , Lebanese Forces leader Samir Geagea and Marada Movement leader to call for the resignation of President Michel Aoun.

In a televised talk show, Jumblatt mentioned that Aoun had failed and that he had proposed his resignation, but Maronite forces in the country, namely Patriarch Bechara Boutros al-Rai and Geagea, had said it was a “red line.”

“Who loves President Aoun would tell him to leave,” he said, adding that if he was president of Lebanon during such a period he would’ve stepped aside.

“If I were the President, I would have resigned,” said Lebanese Forces chief Samir Geagea in remarks at a meeting of his parliamentary bloc.

Geagea added , the entire ruling authority in Lebanon “should step aside,” as the country grapples with an unprecedented economic and financial crisis, amid the paralysis of authorities.

“The sequence of events proved that the ruling group is incompetent and nonviable. The crisis has recently become a crisis of powers of positions while the battle is not a battle of powers and the problem is not between Muslims and Christians, but rather the ruling class that brought the country to where we are,” said Geagea.

He added that “the only solution is to stage early parliamentary elections.”

Patriarch Boutros al Rai was also expected to call on Aoun to resign , but instead he sent very confusing signals . He first visited Aoun in Baabda earlier on Saturday where he expressed support to the the demands of the protesters in the cabinet formation process , but later in the day he received Aoun’s son-in-law Gebran Bassil in Bkirki . Following his talks with Bassil he seems to have changed his earlier position and adopted Bassil’s position .

According to observers Aoun is no longer calling the shots, he has become a figurehead , his son-in-law is telling him what to to do and in consultations with Hezbollah he setting all the conditions for the cabinet formation