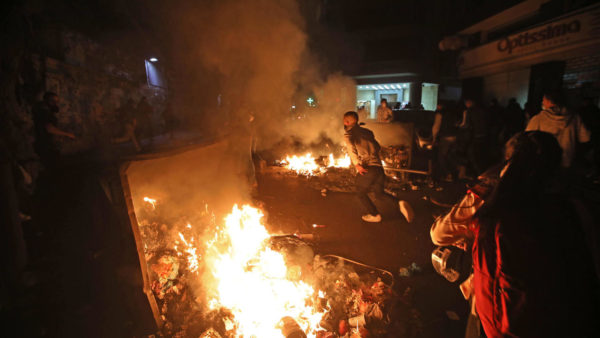 Lebanese students burned dumpsters in the capital Beirut during protests against a decision by top universities to adopt a new dollar exchange rate to price tuition ANWAR AMRO AFP
Share:

Lebanese riot police on Saturday scuffled with students protesting a decision by top universities to adopt a new dollar exchange rate to price tuition — equivalent to a major fee hike.

Near the entrance of the American University of Beirut (AUB) in the city’s Hamra district, security forces fired tear gas to disperse protesters who were trying to approach the main gate.

Students responded by throwing water bottles and other objects at riot police blocking their path.

It was not immediately clear if there were any injuries.

The protest came in response to a decision by AUB and the Lebanese American University (LAU), another top private institution, to price tuition based on an exchange rate of 3,900 Lebanese pounds to the dollar.

The nosediving currency is still officially pegged at around 1,500 pounds to the greenback.

The move has prompted fears that other universities could follow suit, potentially leading to an exodus of students from private institutions while public universities remain underfunded and overstretched.

Hundreds of students had gathered in Hamra earlier Saturday in a protest they billed a “student day of rage”.

They chanted anti-government slogans and called for affordable education in a country mired in its worst economic crisis since the 1975-1990 civil war.

Later in the evening, some torched dumpsters to block the street and vandalised banks before security forces pushed them out.

Over the past year, the Lebanese pound has lost up to 80 percent of its value on the black market, where on Saturday the dollar was selling for at least 8,200 pounds.

Universities have struggled to adapt to the de facto devaluation as prices nationwide have soared.

Commercial banks have halted dollar transactions and restricted withdrawals of Lebanese pounds, in moves that have starved many of their savings.

According to the United Nations, more than half of Lebanon’s population is now living in poverty.