Israel starts its vaccination drive, expects to have enough vaccine by year’s end for 20% of population 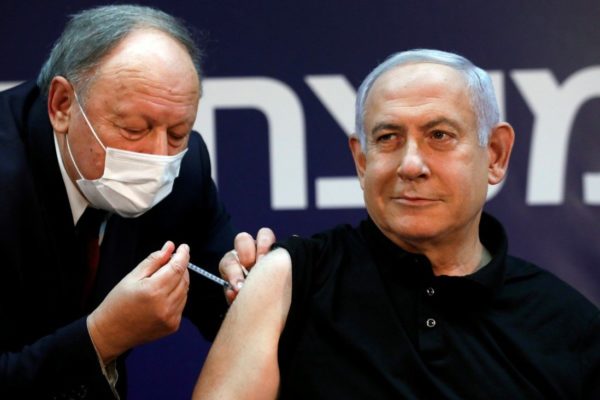 Israel kicked off a coronavirus vaccination drive on Saturday with Prime Minister Benjamin Netanyahu invoking the Bible and the 1969 lunar landing as he got the country’s first injection.

Shipments of the Pfizer vaccines began arriving in Israel last week. Moderna and AstraZeneca vaccines are on order. Israel expects to have enough doses by the year’s end for the 20% of its population most prone to COVID-19 complications.

With polls finding that around two-third of Israelis intend to get vaccinated, officials have sought to stave off what they deem “fake news” about possibly perilous side-effects.

Netanyahu said he was being vaccinated first in order to encourage others. Doffing his suit jacket and rolling up a sleeve, he told reporters his was “a strong hand and an outstretched arm” – a play on the Book of Exodus’ description of God’s power.

With the procedure at Sheba Medical Center over, Netanyahu paraphrased astronaut Neil Armstrong’s first words on the moon:

“That was a small jab for a man, a huge step for the health of us all. May this be this successful. Go out and get vaccinated!”

Israel, with a population of 9 million, has reported 372,401 coronavirus cases and 3,070 deaths. It has imposed two national lockdowns and may soon order curbs on high-contagion areas. Netanyahu has self-isolated three times after exposure to carriers.