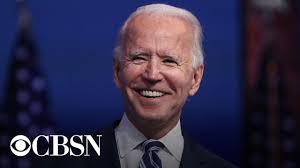 File photo: President-elect Joe Biden . The European Union’s top officials expressed relief on Wednesday that they would again have a friend in the White House as Joe Biden replaces Donald Trump.
Share:

Biden, who will be sworn into office in 43 days, listed masking, vaccinations and opening schools as the key goals of his first 100 days.

President-elect Joe Biden on Tuesday promised that his administration would oversee the injection of 100 million Covid-19 vaccine shots within his first 100 days as president and vowed to reopen a “majority” of schools across the nation in the same time frame.

Biden, who spoke from Wilmington, Delaware, at an event in which he also announced the top members of his health care team, promised that educators, along with health care workers and residents of long-term care facilities, would be among the targets for the first round of Covid-19 vaccinations.

In addition, Biden reiterated that he would call on Americans to wear masks for the first 100 days of his administration, adding that he would sign an executive order on his first day in office to mandate mask use where he could “under the law,” such as in federal buildings and during interstate travel on planes trains and buses.

“Masking, vaccinations, opening schools,” Biden said. “These are the three key goals of my first 100 days.”

Biden’s announcement came at the same time President Donald Trump used a vaccine summit event at the White House to air grievances about the 2020 election. No Biden official was invited to participate in the vaccine summit, a transition official told NBC News.

In his remarks, Biden called on Congress to help fund those efforts, saying that without the necessary federal funding, the efforts would “slow and stall.”

Calling Covid-19 a “mass casualty,” Biden also warned Americans that “things may well get worse before they get better,” cautioning that “It will take longer than we would like to distribute” a vaccine to everyone in the country.

“My first 100 days wont end the Covid virus, I can’t promise that,” Biden said. But, he added, “in 100 days, we can change course of disease and change life in America for the better.”

Biden said it was a “national priority to get our kids back to school,” but repeatedly promised his team would “follow the science.”

Biden used the event to formally introduce his nominees and appointees for his health team, including his choice of California Attorney General Xavier Becerra to head the Department of Health and Human Services and Dr. Rochelle Walensky, a leading expert on virus testing, prevention and treatment, to serve as the director of the Centers for Disease Control and Prevention.

Biden lauded his steam as a group of “world class experts” who would “spare not a single effort to get this pandemic under control.”

As Biden was introducing his team, Trump made remarks at an Operation Warp Speed vaccine summit.

Trump called for state legislatures or Supreme Court justices with “courage” to step up, and said if they do, “I know who the next administration will be.”

“I think that the vaccine was our goal, that was No. 1 because that was the way, it was the way it ends. Plus you do have an immunity, you develop an immunity over a period of time. And I hear we’re close to 15 percent, I’m hearing that and that is terrific. That’s a very powerful vaccine in itself,” Trump said, referring to a so-called “herd immunity” approach to the virus.

Scientists, however, have called that approach a “dangerous fallacy unsupported by the scientific evidence.”

Trump’s comments also came as the White House coronavirus task force warned state that vaccine implementation will not reduce viral spread or deaths “until the late spring,” when the 100 million Americans with comorbidities can be fully immunized.

In other transition news: