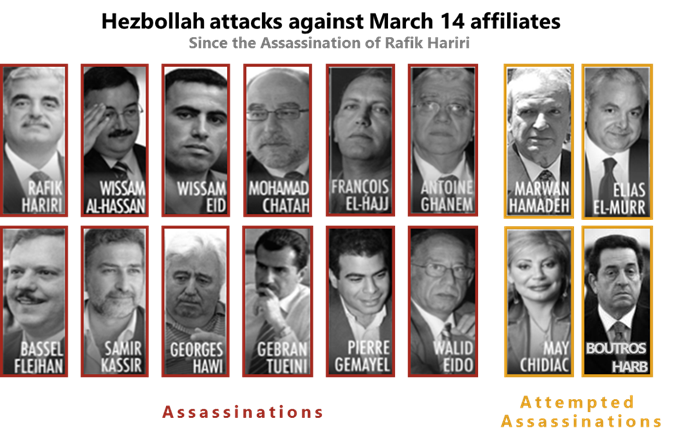 File photo of Anti Hezbollah and Syrian regime Lebanese political leaders , and top officials who were assassinated or survived attempted assassinations since 2004
Share:

BEIRUT: Lebanon’s security services revealed on Thursday that they had received information regarding a plot to destabilize the country through the assassination of public figures over the coming holiday period.

During a meeting of the Supreme Defense Council, the director-general of Lebanese General Security, Maj. Gen. Abbas Ibrahim, and his counterpart at State Security, Maj. Gen. Tony Saliba, said the information had been obtained from more than one security and intelligence service. They did not reveal the names of those believed to have been targeted for assassination.

Supreme Defense Council meetings are usually confidential, but several local media outlets published reports of Thursday’s meeting the next day, along with a story claiming that Hezbollah had thwarted a plot targeting its leaders, particularly Secretary-General Hassan Nasrallah.

The information revealed in the council meeting included suggestions that the operations could target places of worship, commercial venues and tourist destinations. It also reportedly included details of a smuggling ring that has traditionally operated between Iraq and Syria but that now seems to be widening its reach into Lebanon.

The meeting concluded with a decision to develop a pre-emptive security plan to be carried out during the holiday period.

Also on Friday, Hezbollah filed lawsuits against former MP Fares Souaid and the website of the Lebanese Forces for “accusing Hezbollah of being involved in the Beirut port blast on Aug. 4.”

Ibrahim Al-Mousawi, a member of Hezbollah’s parliamentary bloc, said to the media outside Beirut Justice Palace: “A lawsuit is also being prepared against Bahaa Hariri as well as other lawsuits that will soon be registered based on legal articles condemning those who try to sow discord.”

Al-Mousawi added: “Accusations of Hezbollah’s involvement in the explosion are false and constitute a continuation of the crime. When the real perpetrator is lost and the finger of blame is pointed at a party without any evidence, this conceals the real criminal, misleads public opinion, stirs hatred, incites sedition, and threatens civil peace.”

Souaid told Arab News: “I do not recall directly accusing Hezbollah of the Beirut port blast. It does not matter that the party has resorted to the law to sue me — the most important issue is why it has resorted to the judiciary now, and what is behind the lawsuit?”

He went on to suggest that Hezbollah’s public display of initiating legal proceedings against him could be a ruse to cover up its true intentions.

“Hezbollah’s announcement that it will file a lawsuit against me when I am a permanent political opponent of the party is a step that intersects with security information about possible assassinations in Lebanon,” he said. “Does Hezbollah want to clear its name of any assassinations that might take place in Lebanon by saying that it has resorted to the judiciary to prosecute its opponents? Does the party want to clear its name and tell us that it is not a murderer?”

Charles Jabbour, head of the Lebanese Forces’ Media and Communication Service, said: “We hope that Hezbollah will constantly resort to institutions and the judiciary, and that its commitment to institutions and resorting to the law will be an entry point to hand over its weapons to the state.”

However, former minister May Chidiac, who is affiliated with the Lebanese Forces, described Hezbollah’s move as “rude.” She said: “You have no right to complain before the courts about defamation when everyone knows your crimes. You have no regard for the International Tribunal and consider accusing you of involvement in the port blast a false accusation. You have no shame.”

Meanwhile, the British Embassy in Lebanon released a statement in which the UK Minister of State for the Middle East and North Africa James Cleverly — who just finished a two-day visit to Beirut — said, “The people of Lebanon deserve a better future. Accountability, transparency and taking responsibility are key for Lebanon to rise again.”

He added: “The UK is a proud partner of the Lebanese Armed Forces, Lebanon’s sole legitimate defenders.”

The EU delegation to Lebanon announced in a press conference on Friday the launch of its “Lebanon Reform, Recovery and Reconstruction Framework,” which was prepared by the EU, the UN, and the World Bank Group in response to the Beirut port blast and is intended to be implemented within 18 months.

Najat Rochdi, UN resident and humanitarian coordinator and deputy special coordinator for Lebanon, renewed the call for the formation of a new government that bears responsibility for its people. She added: “We have communicated this to those concerned.”