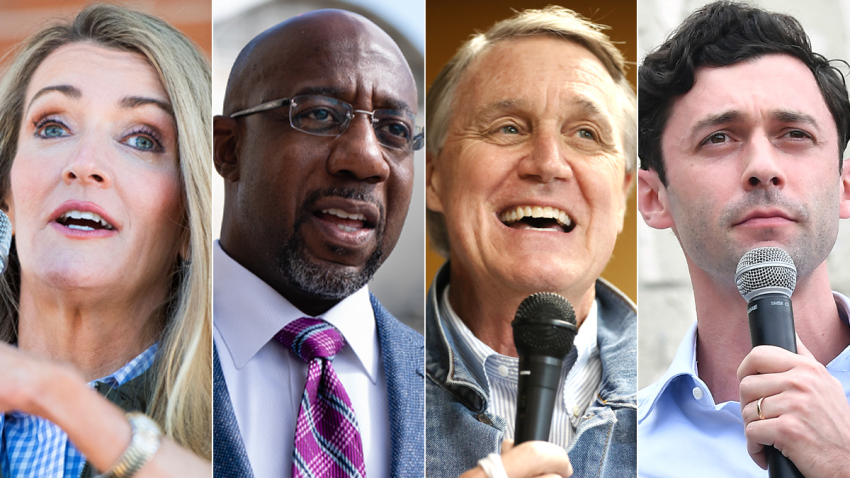 More than 158 million votes — a record — have been counted in the 2020 election. The presidential race has been decided, no matter how many times President Trump falsely claims otherwise. But the Biden-Harris administration ultimately will be shaped by the few million votes yet to be cast in the two Senate runoff elections in Georgia.

Former president Barack Obama wasn’t engaging in too much excessive hyperbole when he told a virtual rally Friday aimed at mobilizing Georgia Democrats: “This is not just about Georgia. This is about America, and this is about the world.”

People on both sides of these battles use similarly apocalyptic language. Everyone is all in on the two Senate races — financially, organizationally and emotionally. Hundreds of millions of dollars will be spent before Election Day, and the barrage of television ads through the holidays will test the patience of the voters.

The runoffs are scheduled for Jan. 5, one day before the House will meet to count the presidential votes from the electoral college. One race pits Republican Sen. David Perdue against Democrat Jon Ossoff. The other is a match between Republican Sen. Kelly Loeffler and the Rev. Raphael Warnock, the senior pastor at Ebenezer Baptist Church, where the Rev. Martin Luther King Jr. once preached.

The two races will decide whether President-elect Joe Biden has a Senate controlled by his party or a chamber that remains in the hands of Republicans and Majority Leader Mitch McConnell (R-Ky.), with the power to frustrate, if not outright obstruct, his agenda. Democrats need to win both to get to 50 senators, which would give Vice President-elect Kamala D. Harris the tie-breaking vote.

Obama’s Zoom rally was just part of a weekend of high-level attention showered on Georgia that speaks to the importance of the runoffs. As Obama was speaking remotely, Vice President Pence was in the state in person trying to rally Republicans to vote in the runoff elections, no matter their feelings about the presidential result.

President Trump, who lost the state by fewer than 13,000 votes, was scheduled to hold a rally on Saturday night, with some Republicans fretting about whether his message would be helpful or harmful in mobilizing Republicans, who are fighting with one another over what happened in November. [Just 26 GOP members of Congress acknowledge Biden’s victory]

Trump’s baseless allegations that the Georgia results are fraudulent have put him at odds with Brad Raffensperger, the Republican secretary of state who defended the counting and certified the results, and Republican Gov. Brian Kemp, who signed off on the certification.

“We need you to stay in the fight,” Pence tweeted Friday evening after his afternoon rally. “And I promise you, we are going to keep fighting. We can fight for our President and more Republicans in the Senate at the same time. We HAVE to do both! So VOTE, Georgia!”

That was Pence’s way of avoiding angering a president who will not concede to reality while encouraging Republican voters to look past Trump’s flailing rhetoric and focus on the two races that have not been decided.

The GOP infighting in Georgia goes beyond whatever the president is saying. Attorneys L. Lin Wood and Sidney Powell (she was recently relieved of duty from the president’s legal team) exhorted Republicans not to vote if the state uses the same voting machines used in the November election. Powell has made wild and unproven claims about the voting machinery.

Their call for a possible boycott of the election drew a tweeted rebuke from former House speaker (and Georgian) Newt Gingrich, who called Wood and Powell “totally destructive,” although Gingrich has been an ally of Trump in claiming the election was potentially fraudulent and needs further investigation.

“I am very worried about the two Senate runoff races because they are the most consequential runoff in American history in terms of shifting the balance of power in Washington,” Gingrich said later in an email message. “Hitting Wood and Powell was just one of dozens of things going on. It is important to remind every conservative that not voting is a disaster for their values.”

A divided and possibly demoralized Republican base stands as the Democrats’ best hope of winning both races. Republicans are clearly worried, as Gingrich’s response to Wood and Powell showed, but strategists on both sides say that the talk of Republicans staying home could be overstated — not out of the question, but by no means a certainty.

Republicans report that GOP voters who side with Trump on false claims that the election was stolen are as focused, if not more focused, on the runoff election as those who say the election was conducted fairly and that Biden was the winner. [Trump, allies dealt legal setbacks in six states]

Democrats hope the GOP turmoil will hold down turnout but aren’t overly confident that will happen. “There’s a lot of internal friction, but they [Republicans] traditionally tend to unify around preservation of their political power,” said Keith Mason, a longtime Democratic strategist.

Turnout in Georgia was more than 20 percent higher in November than it was in 2016 — about 5 million total votes vs. about 4 million. The electorate will shrink, as it always does for runoff elections. The concern for Democrats is whether enough of the suburban voters who turned out in November and helped Biden carry the state will show up for the runoff — and whether they will back Ossoff and Warnock.

Republican groups are trying to shift the focus away from the presidential election to the implications of Democrats holding power in both the House and Senate. They are talking about the merits of divided government — tacit acknowledgment that Biden will be sworn in as president in January — and highlighting the implications of a Congress led by House Speaker Nancy Pelosi (D-Calif.) and Sen. Charles E. Schumer (D-N.Y.) as the new majority leader.

“It’s a completely effective message,” said a GOP strategist who spoke on the condition of anonymity to offer a candid assessment. “Voters are much more scandalized by Schumer and Pelosi in charge than they are in terms of Joe [Biden] being in charge.”

Despite Biden’s victory in the presidential race, Democrats are sobered by the prospect of trying to win a pair of races in a state that, while shifting politically, is still populated by many ­center-right voters.

Perdue was thrown into a runoff because he fell just short of a majority against Ossoff in November, drawing 49.7 percent of the vote to Ossoff’s 47.9. Ossoff has attacked Perdue, a prolific stock trader, by claiming the senator has benefited financially from insider information. The New York Times reported that the Justice Department closed an investigation into one Perdue stock transaction without bringing charges.

Loeffler was appointed to the Senate a year ago after Sen. Johnny Isakson stepped down citing health problems. She and Warnock were the two leading vote-getters in a multicandidate field vying in November to fill out the remainder of the term.

Democrats have attacked the wealthy Loeffler for what they say are her own unethical financial trades, which she has denied. Republicans are hammering Warnock for some of his past statements in an attempt to paint him as an extreme liberal, which he says is a distortion of his record.

These are elections in which little appears movable. The candidates are well-known, their images are sharply defined, the electorate is highly polarized, and there are a minuscule number of persuadable voters. For once, the cliche about turnout is correct. As one Democratic strategist put it: “We know it’s competitive and we know it’s an uphill battle, but we also know no one knows who’s really going to turn out.”