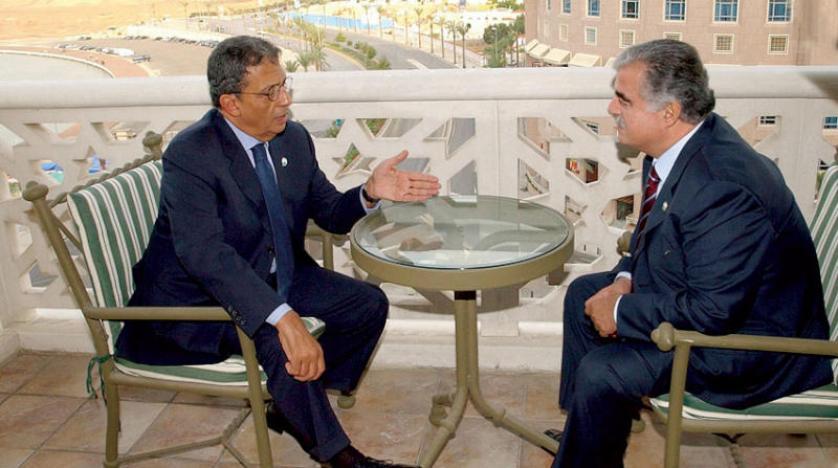 Three years after former Secretary-General of the Arab League Amr Moussa published the first part of his biography, his second book entitled, “The Years of the Arab League”, will soon be released by Dar El-Shorouk.

The 574-page book consists of 19 chapters in which Moussa reveals the secrets of his 10-year tenure at the Arab League (2001-2011), which was marked with major events in the Arab world.

Starting Saturday, Asharq Al-Awsat will publish seven episodes of Moussa’s memoirs. The first part focuses on the political crisis in Lebanon, which began with the call by Hezbollah and its Maronite ally – the Free Patriotic Movement (FPM) – for the resignation of Prime Minister Fouad Siniora’s government, leading to the Doha Agreement in 2008.

Moussa recounts: “On February 14, 2005, I was in my office at the Arab League preparing to travel to Aden to attend the first meeting of the Economic and Social Council of the Arab League outside its headquarters, which was to be inaugurated by Yemeni President Ali Abdullah Saleh. I was watching Al-Jazeera, which suddenly announced a huge explosion in Beirut, in which Prime Minister Rafik Hariri might have been targeted. I surfed satellite stations until I saw on Al-Arabiya channel the news of Rafik Hariri’s death along with 21 other people.

I asked my office director to arrange my travel to Lebanon immediately, and I called the Yemeni Foreign Minister, Abu Bakr al-Qirbi, and told him that I would not be able to attend because of what happened, and that I would go to Lebanon.

President Ali Abdullah Saleh contacted me shortly after, stressing the need for me to come to Yemen; but I apologized, saying that the assassination of Rafik Hariri was an Arab calamity and a very dangerous development.

On the same day, I traveled to Beirut. At Hariri’s palace, I found his two sons Saadeddine and Bahaa. I offered them condolences, and the place was teeming with mourners. I was the first official to arrive from abroad and I stayed in the palace until late at night. The first Arab foreign minister to land in Beirut was Dr. Abu Bakr al-Qirbi, who also did not attend the Aden meeting!

The funeral took place on the second day. Given the deteriorating security situation in Beirut at this time, my dear friend, Speaker Nabih Berri, placed me under the protection of the Parliament’s security guards. It was clear that some leaders of the Sunni community, some Maronite parties and others were blaming Syria for the assassination.

Some of them pointed at Hezbollah, but basically, all accusations were directed at Damascus. I found that the best thing that the secretary-general of the Arab League could do was to travel to Syria and talk to President Bashar al-Assad.

On the third day, I requested to visit Syria. I went under a very tight protection by the Lebanese government until I reached the Syrian border, where the Syrian guards escorted me directly to the presidential palace. President Bashar received me and we had a very frank conversation.

I told him: Mr. President, I came from Lebanon where feelings are raging after what happened. The death of Rafik Hariri will not pass easily, and the Syrian presence [in Lebanon] has now become under deep scrutiny… Demands are growing for the withdrawal of the Syrian forces…

He told me: I am the first Syrian president to withdraw forces from Lebanon. There were more than 60,000 Syrian soldiers when I came to power. I reduced the number to 35,000, and I am ready to withdraw additional troops… I have no objection to removing all the forces. I asked him: Can I, Mr. President, announce that you have decided to withdraw the Syrian army from Lebanon? He said: Yes, you can announce that, because I told you that I will withdraw the army.

I went out and announced the news, saying that it will be carried out within a specific time frame. My meeting with the president was attended by Foreign Minister Farouk Al-Sharaa, with whom I had lunch. Whenever the withdrawal was raised, Sharaa changed the subject, as if he wanted to ignore the topic. He was not comfortable with the announcement by Syrian journalists that the president had decided to start the withdrawal of the Syrian army from Lebanon.

I left Syria by land to Beirut and returned by plane to Cairo. There, I turned on the radio in the car and heard the BBC: “Syrian officials have denied what the secretary-general of the League of Arab States had said about President Bashar al-Assad’s decision to withdraw his troops from Lebanon.”

I got angry, and immediately called Al-Sharaa. He asked me: What do you want us to do?

I told him to confirm my statement as secretary-general of the League after my encounter with the president, and avoid us getting into a war of statements because I will of course insist on what I mentioned following the meeting.

The Syrian side consented and the president started reducing the forces until their complete withdrawal.

Motives of the assassination

In my interpretation of the motives for Hariri’s assassination, I say: He was a leader capable of exercising power, as he was of a special prestige, whether among the Lebanese Sunnis or among the political, economic and societal circles in Lebanon in general. The presence of a man of Hariri’s stature at the top of the Sunni community cannot be ignored in the face of Hezbollah.

The removal of Hariri from the scene was based on long-term regional calculations, and an important part of what we see in Lebanon today is connected to it.

Between March and June 2006, the Lebanese National Dialogue Conference, with the participation of leaders and influential figures, reached consensus on the Special Tribunal for Lebanon and diplomatic relations between Lebanon and Syria, the demarcation of the borders and the possession of weapons outside the Palestinian camps. A serious discussion took place over Hezbollah’s arms, but without being completed.

The national dialogue made us believe that things were heading towards a quiet Lebanese summer, especially on the southern borders with Israel. But on June 12, 2006, a force affiliated with Hezbollah attacked an Israeli military post on the border, resulting in the capture of two Israeli soldiers and the killing of eight others. Israel responded by launching an extensive attack.

The Arab views varied over the escalating steps that Hezbollah had taken against Israel. Egypt and Saudi Arabia considered this an adventure by the party. Here, I must say that managing Arab politics, especially when it comes to a crisis that has far-reaching roots, is always linked to global policies and contradictory interests of major countries, such as the Arab-Israeli conflict.

From this standpoint, the Arab League’s stance was formulated at that time without prejudice to the organization’s firm position regarding one of the origins of the problem, namely the Israeli occupation and its practices that can neither be accepted nor tolerated.

Immediately after the outbreak of the aggression, Kuwait, in coordination with me, called for an urgent meeting of the Arab foreign ministers at the headquarters of the Arab League in Cairo, which took place on July 15, 2006.

Al-Muallem addressed the participants, saying: “I want to share with you some of my crazy dreams, I say crazy because they don’t match the current Arab or international situations… I dreamed that our meeting would begin with a minute of silence for the souls of the martyrs of Gaza and Lebanon, and that the secretary-general will call for our meeting in Gaza… In all frankness and sincerity… we will not adopt any word that comes out of here that is beneficial to Israel in its aggression against Lebanon, whether in the name of rationality or in the name of emotion…”

Prince Saud asked to respond to Al-Muallem, saying: “I did not know that the policy of brother Walid was driven by dreams… Why is it permitted to use the Lebanese borders to attack Israel and not to use the Golan? Did Israel attack because we issued a statement? Israel attacked because of what Hezbollah had done in the region. What kind of a dream is it when a person believes that rationality and logic were a fatal mistake? These are demonic dreams.”

I observed in silence what was happening, hoping to find an opportunity to interject. At the same time, it was difficult to change the convictions of a large group of Arab League members that Hezbollah’s actions were not motivated by resisting Israeli occupation, but rather part of a political game led by Iran and its regional role that opposes Arabs and their interests.

During the last week of July 2006, I felt that we needed to block the American-French draft resolution in the Security Council, because it would be unjust to Lebanon.

Hence, I called for a meeting of the Arab foreign ministers at the Grand Serail in Beirut, to be held on August 7. Following speeches in solidarity with Lebanon, the meeting turned into a bitter and long debate between Al-Muallem, who insisted on saluting Hezbollah in the decision of the Arab League Council, and Siniora, who responded by saying: “Arab foreign ministers came here to support a unified Lebanese position.”

The meetings in New York ended with the Security Council issuing Resolution 1701 on August 11, 2006. Through a legal reading of the resolution, I say that it is largely biased towards Israel, but it can be considered as better than the previous draft resolutions that were rejected by both Hezbollah and the Lebanese government. According to Hassan Nasrallah, this decision was the least harmful of all the other draft-resolutions.