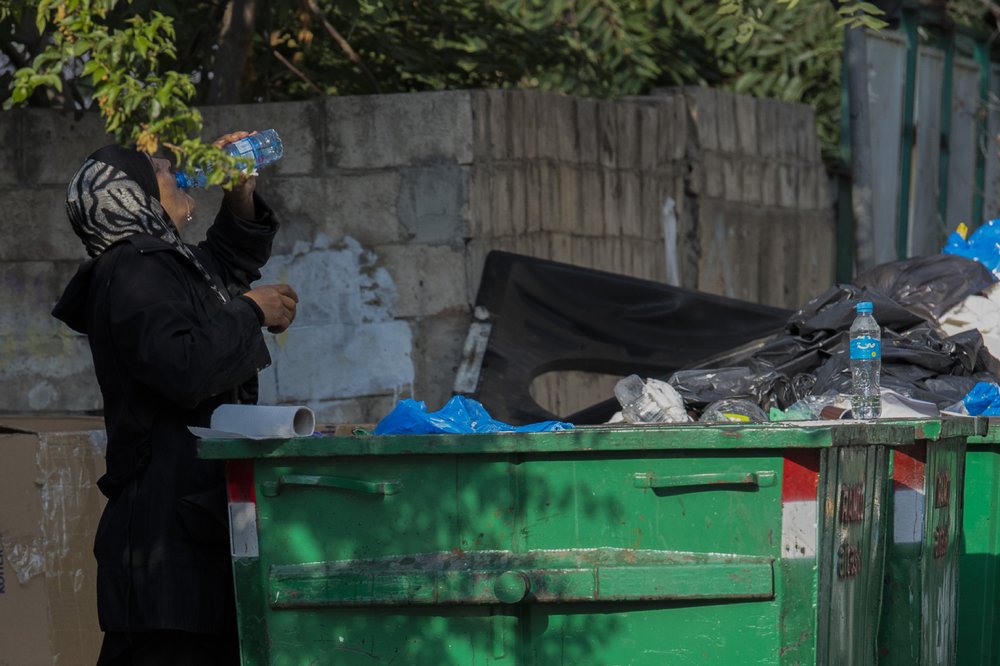 A homeless woman drinks water from a garbage dumpster in Beirut, Lebanon, Thursday, July 23, 2020. Lebanon should quickly form a reform-minded government to carry out badly needed reforms to help get the tiny country out of its severe economic crisis where the Real GDP growth is projected to contract nearly 20% in 2020 and a crash in local currency led to triple-digit inflation rates, the World Bank said Tuesday. (AP Photo/Hassan Ammar)
Share:

BEIRUT (AP) — Lebanon’s economy faces an “arduous and prolonged depression,” with real GPD projected to plunge by nearly 20% because its politicians refuse to implement reforms that would speed up the country’s recovery, the World Bank said Tuesday.

It said Lebanon should quickly form a reform-minded government to urgently carry out the reforms. The crash of the local currency has already led to triple-digit inflation.

The dire projections by the World Bank, including a 19.2% drop in gross domestic product this year alone, come as Lebanon suffers its worst economic and financial crisis in its modern history, posing a threat to the country’s stability.

The crisis began a year ago and worsened with the spread of coronavirus and the massive blast at Beirut’s port, which destroyed the facility, killed more than 200 people and caused widespread destruction.

The World Bank report came a day before France and the U.N. are scheduled to host a new conference about aid to Beirut in the wake of its devastating port explosion, political deadlock and worsening economic crisis.

French President Emmanuel Macron and U.N. Secretary-General Antonio Guterres will co-preside over the video conference, which will also include Lebanese nongovernmental groups and other organizations seeking to help.

Lebanon’s government resigned days after the Aug. 4, blast, caused by the detonation of nearly 3,000 tons of ammonium nitrates that had been stored at a port warehouse for years. Former Prime Minister Saad Hariri has been trying to form a new government amid political bickering after he won majority backing from legislators to form a new Cabinet in late October.

“Lack of effective policy action by authorities has subjected the economy to an arduous and prolonged depression,” the World Bank report said. “One year into the economic crisis, such policies have not yet been decided, let alone implemented. As a result, Lebanon’s economic crisis is likely to be both deeper and longer than most economic crises.”

The economic and financial crisis that led to harsh capital controls by local banks and the drop of the local currency by nearly 80% is expected to drag more than half of Lebanon’s population into poverty.

Over the past year, tens of thousands of people have lost their jobs, with many leaving to seek opportunities abroad. The migration of skilled workers from the country of 5 million could further hinder any recovery.

In March, Lebanon defaulted for the first time ever on a payment on its massive debt amid ongoing popular unrest. Lebanon’s debt reached $90 billion or 170% of GDP, making it one of the highest in the world.

International donors have vowed not to give financial aid to Lebanon before major reforms are implemented to fight decades of widespread corruption and mismanagement.

The extent and speed to which aid and investments are mobilized will depend on whether authorities and the parliament can act quickly, the report said.

“Without reforms, there can be no sustainable recovery and reconstruction, and the social and economic situation will continue to worsen,” the World Bank warned.

The latest blow to reforms in the country came last month when New-York-based Alvarez & Marsal, which was contracted by the Lebanese government to conduct a forensic audit of the country’s central bank, decided to pull out of the deal because it was not able to acquire requested information and documents.