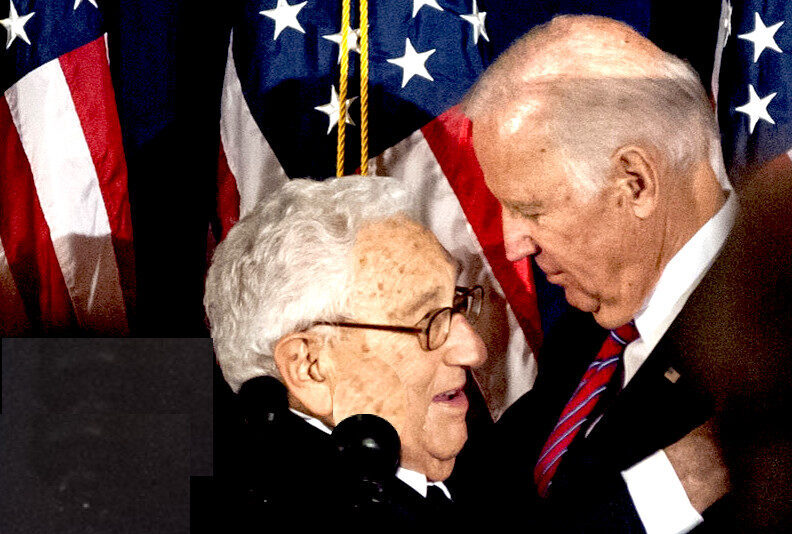 “America and China are now drifting increasingly toward confrontation, and they’re conducting their diplomacy in a confrontational way,” the 97-year-old Kissinger said in an interview with Bloomberg News Editor-in-Chief John Micklethwai

Former US  Secretary of State Henry Kissinger said the incoming Biden administration should move quickly to restore lines of communication with China that frayed during the Trump years or risk a crisis that could escalate into military conflict.

“Unless there is some basis for some cooperative action, the world will slide into a catastrophe comparable to World War I,” Kissinger said during the opening session of the Bloomberg New Economy Forum. He said military technologies available today would make such a crisis “even more difficult to control” than those of earlier eras.

“America and China are now drifting increasingly toward confrontation, and they’re conducting their diplomacy in a confrontational way,” the 97-year-old Kissinger said in an interview with Bloomberg News Editor-in-Chief John Micklethwait. “The danger is that some crisis will occur that will go beyond rhetoric into actual military conflict.”

The diplomat who paved the way for President Richard Nixon’s historic 1972 trip to China said he hoped that the shared threat of the Covid-19 pandemic would provide an opening for political discussions between the two countries when Biden takes office on Jan. 20.

“If you can look at Covid as a warning, in the sense that in practice it is dealt with by each country largely autonomously, but its long-term solution has to be on some global basis,” Kissinger said, “it should be dealt with as a lesson.”

US-China relations are at their lowest in decades, despite the two sides reaching a “phase one” trade deal at the start of the year. Since then, the virus outbreak that began in Wuhan, China, has gone global, killing more than 1.3 million people and crushing economies around the world.

As President Donald Trump stepped up his criticism of China, blaming it for the spread of the virus and the death toll in the U.S., each side also has ramped up moves the other sees as hostile.

Last week, China’s crackdown on Hong Kong’s autonomy continued, as officials there disqualified lawmakers viewed as insufficiently loyal to Beijing. U.S. officials have decried the death of the “one country, two systems” policy that has helped Beijing navigate its ties with the West for a generation.

The US followed up on its criticism by imposing new sanctions, banning investments in 31 Chinese firms it says are controlled by the country’s People’s Liberation Army.

“Trump has a more confrontational method of negotiation than you can apply indefinitely,” Kissinger said. Early in Trump’s term, “it was important for him to emphasize the deep concerns Americans have about the evolution of the world economy that is not balanced. I think that was important to emphasize. But since then, I would have preferred a more differentiated approach.”

The swift erosion in ties this year means China and the U.S. are edging toward a new Cold War, Kissinger said, adding that the two sides should “agree that whatever other conflict they have, they will not resort to military conflict.”

To achieve that, the U.S. and China should jointly create “an institutional system by which some leader that our president trusts and some Chinese leader that President Xi trusts are designated to remain in contact with each other on behalf of their presidents,” he said.

Relations with China may dominate the foreign policy agenda of President-elect Joe Biden’s administration. He’s expected to seek ways to defuse tensions in areas including the future of 5G technology, China’s expansionism in the South China Sea and Hong Kong’s fading autonomy.

While Biden has decades of experience in dealing with China, his tone took a harsher turn during the presidential primaries. He frequently criticized China’s assertive policies in its region as well as Beijing’s human rights record, even branding President Xi Jinping a “thug” during a debate in February.

“Of course, there are differences on the issue of human rights,” Kissinger said when asked what more China could do to improve relations. “It is important for each side to understand the sensitivities of the other, and not necessarily to solve the problem, but to alleviate it to a point where further progress is possible.”

Xi used a speech last week to call for countries to strengthen cooperation and avoid conflict, even as his policies set China on a collision course with the U.S. And China last week congratulated Biden and Vice President-elect Kamala Harris on their election victory.

“The United States and China have never faced countries of a magnitude that is roughly equal with the other,” Kissinger said. “This is the first experience. And we must avoid its turning into conflict, and hopefully lead to some cooperative endeavors.”

Reviewing some of Biden’s proposals for addressing China, Kissinger urged caution when asked about the idea of building a coalition of democracies to take on Beijing.US Presidential-elect Joe Biden and Vice-Presidential elect Kamala Harris (AP Photo/Carolyn Kaster)

“I think democracies should cooperate wherever their convictions allow it or dictate it,” he added. “I think a coalition aimed at a particular country is unwise, but a coalition to prevent dangers is necessary where the occasion requires.”

Ultimately, Kissinger said, the two nations’ leaders need to recognize that they see the same issues very differently, and that colors their approach to talks.

“Americans have had a history of relatively uninterrupted success,” he said. “The Chinese have had a very long history of repeated crises. America has had the good fortune of being free of immediate dangers. Chinese have usually been surrounded by countries that have had designs on their unity.”

Europe will increasingly find itself caught in a tug-of-war between the U.S. and Eurasia, Kissinger added.

“Europe has been an anchor of American foreign policy in the entire post-World War II period,” he said. “The question for them now is whether, in the evolution of relations with other parts of the world, they will attempt to play a totally autonomous role.”