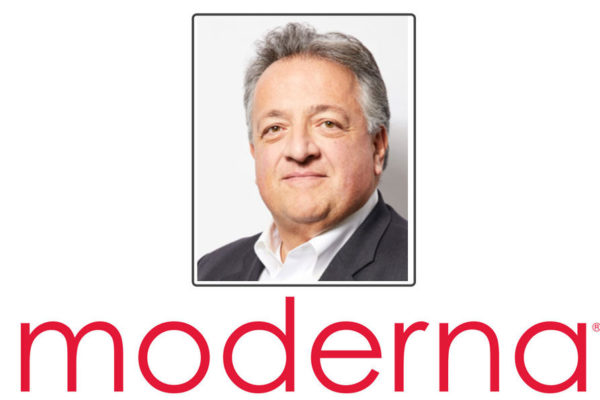 Noubar Afeyan, co-founder and chairman of Moderna, is a two-time immigrant. He was born to Armenian parents in Lebanon and immigrated with his family in his early teens to Canada. After attending college, Afeyan came to the United States and earned a Ph.D. in biochemical engineering at the Massachusetts Institute of Technology (MIT).
Share:

Moderna, the first company to ship a vaccine for testing against the novel coronavirus, was founded by an immigrant. Not only did an immigrant found Moderna but many of its key leadership positions, including its CEO, are immigrants. The story of how Moderna rose to its position in helping to lead the fight against Covid-19 and other medical threats is uniquely American, a story of welcoming talent from all over the world.

Noubar Afeyan, co-founder and chairman of Moderna, is a two-time immigrant. He was born to Armenian parents in Lebanon and immigrated with his family in his early teens to Canada. After attending college, Afeyan came to the United States and earned a Ph.D. in biochemical engineering at the Massachusetts Institute of Technology (MIT). He started his first company at age 24 and ran it for 10 years, during which time he founded or co-founded five additional companies.

In 1999 he founded Flagship Ventures to develop new companies through its in-house division VentureLabs. In addition to investing in startups the idea was to be more systematic in developing companies. VentureLabs conducted its own research and formed new companies if the research proved promising.

The U.S. immigration system has no startup visa for founding a company, which is often is an obstacle for foreign nationals with good ideas. However, Afeyan gained permanent residence through another route and is credited as a founder or co-founder of 38 companies. He also has over 100 patents. In 2009, he co-founded Cambridge, Massachusetts-based Moderna, Inc.

Moderna’s CEO is Stéphane Bancel, who immigrated to America from France. He earned a master of engineering degree from École Centrale Paris (ECP), and came to the United States as an international student, receiving a master of science in chemical engineering from the University of Minnesota and an M.B.A. from Harvard Business School.

Other immigrants in key leadership positions at Moderna include Chief Medical Officer Tal Zaks, in charge of clinical development at the company. Zaks earned an M.D. and Ph.D. from the Ben Gurion University in Israel before coming to the United States for post-doctoral research at the National Institutes of Health, as well as clinical training in internal medicine at Temple University Hospital. Chief Digital and Operational Excellence Officer Marcello Damiani immigrated from France. Moderna’s Chief Technical Operations and Quality Officer Juan Andres immigrated from Spain. Both Damiani and Andres have extensive international business experience.

Today, the company has approximately 820 full-time employees and a market capitalization of about $28 billion. The company is publicly traded on Nasdaq.

On February 24, 2020, the company made worldwide news when it announced the release of “the first batch of mRNA-1273, the Company’s vaccine against the novel coronavirus, for human use.” Vials were shipped to the National Institutes of Health (NIH) for a Phase 1 study.

The vaccine is part of Moderna’s evolution to a clinical stage company. In 2016, Stéphane Bancel said, “Advancing to the clinic certainly was the most gratifying milestone. We are now a major step closer to delivering on the promise of transformative mRNA science to bring breakthrough medicines to patients across a vast array of diseases, including infectious diseases, rare diseases, cancer and cardiovascular diseases, among others.”

Noubar Afeyan explained in an interview that the promise of messenger RNA. He said changes to DNA can be essentially permanent, like hardware. By contrast, messenger RNA is more like software: it can be used to perform a task and then can be programmed to disappear.

“Instead of making protein medicines in factories very far away, what we are trying to do is to inject you with messenger RNA so that your own body will make the protein,” said Stéphane Bancel in a 2015 interview with CNBC.

“RNA vaccines are great if a vaccine has to be built as fast as possible,” according to Dr. Ivan Martinez, associate professor at West Virginia University, in an interview with USA Today. “It’s a technology that could potentially give us a vaccine within a year from now.”

“The new approach I’m most excited about is known as an RNA vaccine,” wrote Bill Gates in the Washington Post. “Unlike a flu shot, which contains fragments of the influenza virus so your immune system can learn to attack them, an RNA vaccine gives your body the genetic code needed to produce viral fragments on its own. When the immune system sees these fragments, it learns how to attack them. An RNA vaccine essentially turns your body into its own vaccine manufacturing unit.”

In late April, Moderna requested permission from the Food and Drug Administration to move to a second phase of testing. In June, Reuters reported,“A series of studies in mice of Moderna Inc’s Covid-19 lent some assurance that it may not increase the risk of more severe disease, and that one dose may provide protection against the novel coronavirus, according to preliminary data.”

On July 27, 2020, the National Institutes of Health announced, “A Phase 3 clinical trial designed to evaluate if an investigational vaccine can prevent symptomatic coronavirus disease 2019 (COVID-19) in adults has begun. The vaccine, known as mRNA-1273, was co-developed by the Cambridge, Massachusetts-based biotechnology company Moderna, Inc., and the National Institute of Allergy and Infectious Diseases (NIAID), part of the National Institutes of Health. The trial, which will be conducted at U.S. clinical research sites, is expected to enroll approximately 30,000 adult volunteers who do not have COVID-19.”

Noubar Ayefan has voiced support for ways to increase the number of immigrant entrepreneurs in America. A startup visa is one way. Afeyan views immigrants and entrepreneurs as natural complements. “What keeps you from innovating is being comfortable,” he said. “If you’re an immigrant, then you’re used to being out of your comfort zone.”

Americans are fortunate Noubar Afeyan immigrated to the United States, and that the individuals who formed most of the leadership team at Moderna followed him to America.

This article was published last August by Forbes

Moderna’s vaccine against Covid-19 is strongly effective, the company said Monday, building excitement about the potential of controlling the global pandemic.

The news comes exactly a week after results from Pfizer and BioNTech, which announced broadly similar results.

The Moderna vaccine reduced the risk of Covid-19 infection by 94.5%. There were 95 cases of infection among patients who received placebo in the company’s 30,000-patient study. There were only five infections in patients who developed Covid-19 after receiving Moderna’s vaccine, mRNA-1273.

Anthony Fauci, director of the National Institute of Allergy and Infectious Diseases, admitted the preliminary data for the Moderna and the Pfizer vaccines — the only two so far to have early estimates of vaccine efficacy — are better than he had anticipated.

“I’d like to say I would have predicted it, but I would not have,” said Fauci, who has often said he would have been satisfied with Covid vaccines that were 70% or 75% efficacy.

The companies said they will file for an emergency use authorization with the Food and Drug Administration in the coming weeks, and will file with other global regulators. The European Medicines Agency announced Monday that it has begun a rolling review of the Moderna vaccine.

Moderna has a $1.525 billion contract to provide the United States with 100 million doses of the vaccine through Operation Warp Speed, the government’s fast-track program for Covid-19 vaccines, therapeutics, and diagnostics. The contract gives the U.S. government an option to purchase an additional 400 million doses.

The Moderna and Pfizer mRNA vaccines, if approved, will become the first licensed products using an approach that has been thought to hold enormous promise as a tool for responding to new disease threats.  The vaccines contains genetic material that prompt the body to create a protein that sits on the exterior of the virus, effectively training the immune system to recognize it as an invader.

The Moderna vaccine is given in two doses, 28 days apart.