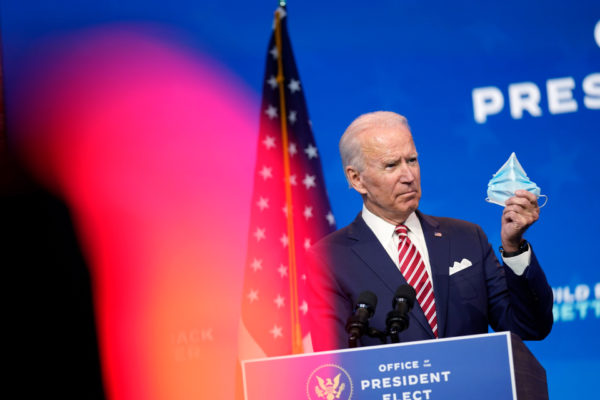 US media outlets have called that Joe Biden won the election
Share:

RUDY Giuliani reportedly asked the Trump team for $20,000 per day to oversee the election 2020 court challenges.

The attorney allegedly asked for the daily fee to pay for his legal work, multiple people briefed on the matter told the New York Times.

However, Giuliani quickly denied the comments to the Times, telling them: “I never asked for $20,000.”

He told the outlet that the president said he would be paid for the work after the cases were concluded.

“The arrangement is, we’ll work it out at the end,” he said, before calling the rumor source as “a complete liar.”

If Giuliani were to receive $20,000 per day, he would be among the highest paid attorneys.

The financial news came after it was reported that Giuliani filed an application to support the president’s Pennsylvania court battles on Tuesday morning.

The document stated: “Attorney Scaringi and/or Attorney Caffrey are instructed to have Attorney Giuliani register as an e-filer with Middle District of [Penn.] as soon as possible; all participating attorneys are required to be e-filers unless they petition the Chief Judge for exemption.”

On Tuesday, Giuliani told reporters that the supposed “fraud” is happening in “big cities, controlled by Democrats.

“You’d have to be a fool to think this is an accident.”

He also claimed that inspectors “weren’t allowed to observe” the ballot-counting, as well as dubbing mail-in ballots a threat of voter fraud.

A hearing on the Trump campaign’s federal lawsuit seeking to prevent Pennsylvania officials from certifying the vote results remains on track for Tuesday after a judge quickly denied the campaign’s new lawyer’s request for a delay.

US Middle District Judge Matthew Brann told lawyers for Donald J. Trump for President Inc. and the counties and state election official it has sued that they must show up and “be prepared for argument and questioning” at the Williamsport federal courthouse.

The Trump campaign wants to prevent certification of results that give President-elect Joe Biden the state’s 20 electoral votes, suing over election procedures that were not uniform across the state.

Pennsylvania Secretary of State Kathy Boockvar has asked to have the lawsuit thrown out, calling its allegations in court filings “at best, garden-variety irregularities.”

Brann scheduled the hearing to discuss the campaign’s request for a temporary restraining order as well as the defendants’ request to have the case dismissed.

Camp Hill lawyer Mark Scaringi, a losing candidate in the 2012 Republican US Senate primary, notified the judge he was stepping in, but did not get the delay he sought.

Giuliani has previously worked for Trump as his attorney, including during the Mueller report court hearings.

However, in recent weeks Giuliani has mainly focused his time on trying to claim election fraud.

Giuliani shockingly claimed he has evidence that the election will be “overturned” and that there is “evidence of illegal ballots.”

Giuliani made unbacked claims to Fox News host Marina Bartiromo on Sunday morning that Trump actually was the winner in key battleground states.

“In every one of those states, we have more than enough illegal ballots already documented to overturn the result in that state,” Giuliani claimed.

He alleged: “They didn’t allow Republicans in those key places to observe the mail vote. That makes the mail vote completely invalid.