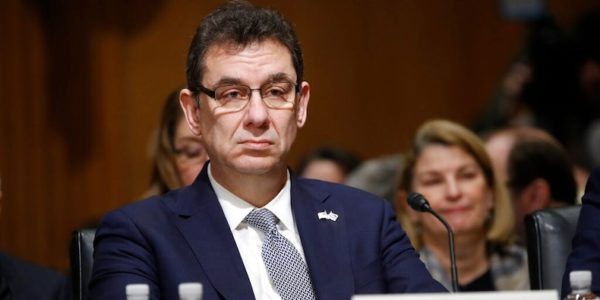 Pfizer CEO Albert Bourla sold over 60 % of his his shares in the company on the same day the drugmaker announced the results of its COVID-19 vaccine trial, as part of a predetermined trading plan adopted August 19.
Share:

Pfizer CEO Albert Bourla sold 62% of his stock on the same day the company announced its experimental COVID-19 vaccine succeeded in clinical trials.

Bourla sold 132,508 shares in the company at an average price of $41.94 a share, or $5.6 million total, according to filings registered with the Securities and Exchange Commission. The 52-week high for Pfizer’s stock is $41.99, meaning Bourla sold his stock at almost its highest value in the past year.

His stock sale was carried out through a routine Rule 10b5-1, a predetermined trading plan that allows company staff members to sell their stock in line with insider-trading laws. Bourla’s sale was part of a plan adopted August 19, the filing showed. He continues to own 81,812 Pfizer shares.

Pfizer confirmed that Bourla’s stock sales were part of a plan that allows major shareholders and insiders of exchange-listed corporations to trade a predetermined number of shares at an agreed time.

“Through our stock plan administrator, Dr. Bourla authorized the sale of these shares on August 19, 2020, provided the stock was at least at a certain price,” a Pfizer spokesperson told Business Insider.

On Monday, Pfizer and its German partner BioNTech said their COVID-19 vaccine was found to be over 90% effective in preventing illness, based on 94 observed cases in a trial with thousands of participants. The pharma firms are the first to report positive results from late-stage COVID-19 vaccine trials.

Pfizer is already working on a workaround powder-form vaccine to address the current one’s biggest limitation: having to be stored at extremely low temperatures.

The vaccine, which involves two doses administered three weeks apart, won’t be distributed immediately, as it still needs to be evaluated and approved by the US Food and Drug Administration.