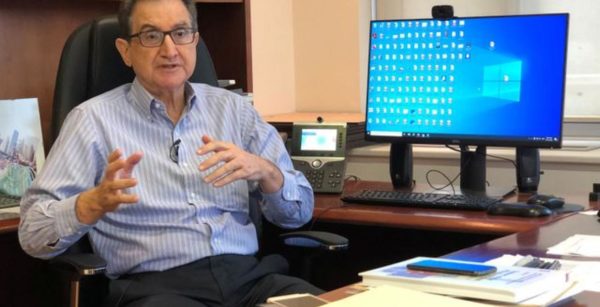 Dr Fouad Boulos, who returned to Beirut in 2007 from the United States having trained there in pathology and laboratory medicine. He was so confident that Lebanon was the right place to be that he gave up his American residence green card. Boulos said he had lost faith in the country’s corrupt leadership, after years of instability caused by political bickering and is now leaving Lebanon again . He said there is a mass exodus of highly qualified doctors from Lebanon
Share:

BEIRUT – Fouad Boulos returned to Beirut in 2007 from the United States having trained there in pathology and laboratory medicine. He was so confident that Lebanon was the right place to be that he gave up his American residence green card.

Fourteen years later he is leaving his homeland with his wife and five children and returning to the United States to try his luck starting from scratch.

In the past year, Lebanon has been through a popular uprising against its political leaders, the bankruptcy of the state and banking system, a COVID-19 pandemic and, in August, a huge explosion at the port that destroyed swathes of Beirut.

Some of those who can leave the country have done so, and an increasing number of them are doctors and surgeons, many at the top of their profession. With them goes Beirut’s proud reputation as the medical capital of the Middle East.

“This is a mass exodus,” said Boulos, Associate Professor of Clinical Pathology and Laboratory Medicine at the American University of Beirut (AUB).

“It will keep on going,” he told Reuters. “If I had hope I would have stayed but I have no hope – not in the near nor in the intermediate future – for Lebanon.”

As he spoke at his mountain residence in Beit Mery, a forested area with sweeping views over Beirut, his wife helped pack up their last possessions, ready to return to the United States.

Suitcases lined the hallway, and one of his daughters was online saying final farewells to school friends and her teacher.

“It breaks my heart. It was the hardest decision I ever had to make, leaving everything behind,” Boulos added.

Many highly qualified physicians, who were in demand across the United States and Europe before they returned to Lebanon after the 1975-90 civil war, are throwing in the towel, having lost hope in its future.

They are not only seeing wages fall, but also face shortages of equipment, staff and even some basic supplies in their hospitals as Lebanon runs out of hard currency to pay for imports.

Sharaf Abou Sharaf, head of the doctors’ syndicate, said the departure of 400 doctors so far this year creates a major problem, especially for university hospitals where they both practise and teach.

“This bleeding of talent does not bode well, especially if the situation lasts long and there are others who are preparing to leave,” he said.

“Their expertise was built over many years and is very hard to lose overnight. We will need many years to return the medical sector to its former glory,” he told Reuters.

Protests that erupted last year and brought down the government had raised hopes that politicians, selected by a system in which leaders of Christian and Muslim sects shared the top jobs, could be pushed aside.

“The explosion was the final nail in the coffin,” Boulos said.

“It crystallised all the fears, all the pain and all the difficulties that we were living through,” added the medic, who trained at Vanderbilt University in Nashville, Tennessee.

‘CORRUPT TO THE CORE’

Boulos said he had lost faith in the country’s leadership, after years of instability caused by political bickering.

“Lebanon is corrupt to the core,” he said, echoing the chants of thousands of protesters who packed city streets during the last year.

The country has also had to deal with the influx of more than a million Syrians fleeing civil war, an economy that has buckled under the weight of debt, mass unemployment, poverty, and, more recently, the coronavirus pandemic.

On Tuesday, Lebanon ordered a nationwide lockdown for around two weeks to stem the spread of the virus, as intensive care units reached critical capacity.

Hassan, the caretaker health minister, has said an agreement was reached with the central bank to allocate funds for private hospitals to set up COVID-19 wings and that the state would pay hospital dues for the first six months of 2020.

The government had for years owed hospitals arrears and their unpaid bills are mounting.

Ghazi Zaatari, Associate Dean for Faculty Affairs and Chair of the Department of Pathology & Laboratory Medicine at AUB, said he feared the exodus would accelerate.

“For the past 10 years we put a lot of effort into recruiting around 220 faculty members, and now it is very disheartening to see that many of those we hired are leaving again.”

Doctors in Lebanon, although relatively well paid, generally earn less than they did abroad.

Over the past year they have seen real incomes drop due to the 80% devaluation in the currency.

The caretaker health minister said the state was seeking international help to prop up depreciated salaries of doctors to slow the exodus.

But both Boulos and Zaatari said money was not the main problem.

“Money is an issue, but this lack of trust and confidence in the political leadership (for) a safe, secure and successful future is a huge factor,” Zaatari said.

“I am one of those who came back in the mid-90s believing that there was a promise of a better future and a reconstruction plan, only to find that 20 years later everything is collapsing and the promises were false promises. We were robbed big time.”