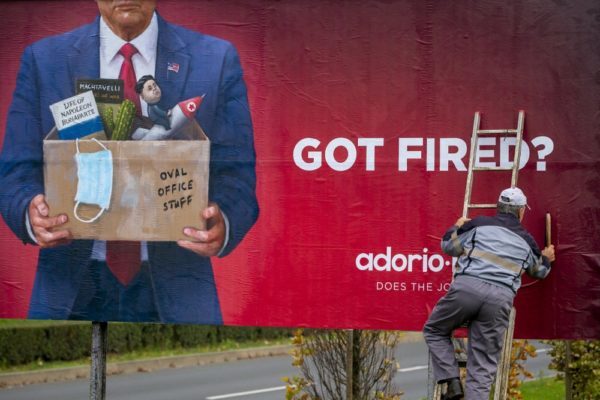 Four days. As if to blur four long years in an 88-hour whirlwind of ballot-counting and news updates. As if to erase away the pencil scratches of a presidency. As if nothing had ever happened.

Saturday morning, we purged that oval, high-ceilinged room in Washington D.C and declared that the parasite would have to pack up his bags. We set things back to normal. We clicked our ruby heels together three times and found our way back home.

Still, I can’t help but taste the bitter edge of victory on my tongue.

This was the country that at long last salvaged democracy. But this was also the nation that had left both my suitemate and I cradling our heads in our hands on Tuesday night, wondering if déjà vu would come to haunt us again. I saw a Florida that slipped away, a North Carolina that quietly squirmed out of our grasp and a Georgia that teetered on the brink of Republican takeover as what should have been a resounding denunciation played out in an agonizing, nail-biting fashion. After an impeachment trial, two contentious justice nominations, the mostcriminal advisers in all history, an economic recession and over 200,000 deaths, America didn’t so much as show Donald Trump the White House door than it held his hand and guided him down the steps. For a megalomaniacal madman who has paraded stunt after stunt in never ending succession, a mere Democratic victory almost seemed underwhelming.

Last week was another rude awakening. A cruel reminder that, four years later, we barely managed to learn from our mistakes. A record-breaking 75 million votes were cast for Joe Biden. But an equally record-breaking 70 million votes revealed a disquieting truth: Trumpism is no fluke — if anything, his supporter base has only grown. We only narrowly averted another disaster. Once again, we bought into the lies. We turned on our partisan blinders four years ago, this past Tuesday, and even now, as post-election media coverage glosses over Trump’s continued sway to trumpet a decisive Democrat victory.

On Tuesday night, Donald Trump proved to us he was not the diseaseafflicting America but merely a symptom of it. Over the past four years, he flouted laws, shirked responsibility and hurled insults.  He cried foul and tweeted to no end. He was — and still is — America’s son: the proud product of political factions, misinformation and shameless self-promotion. The offspring of a nation beset by that ugly strain of chauvinism, ignorance and xenophobia.

You can snap yourself out of a nightmare, but you can’t squeeze out a bad dream from your memory. You simply can’t will away the frolicking anti-maskers and Proud Boys and throngs of red hats clustered in a subfreezing Omaha airfield. In an administration whose incompetence and utter recklessness have ventured beyond the reach of any descriptive adjective, Trump and his cronies showed us all what we were capable of. They painfully revealed the lows America will sink to; the great lengths we’ll travel for the sake of justifying our illusions; the easeful willingness by which we’ll dispense with any semblance of truth and decency. Crossing a Rubicon it couldn’t uncross, America had forfeited its integrity — Trump merely helped the nation in tossing it out.

Beyond the loss of virtue, we saw just how fragile and vulnerable our government was as Trump wriggled through its loopholes — not only that, but the complicity of groveling politicians who abetted and enabled the demagogue. Lindsey Graham, U.S. Senator of South Carolina,  shapeshifted from condemnation to total sycophancy. Susan Collins, U.S. Senator of Maine, couldn’t make up her mind. Current U.S. Senate majority leader Mitch McConnell kept quiet. And, in the way, sealed lips can sometimes speak volumes, the Republicans’ silence on Capitol Hill proved they were more concerned with defending their prospects of reelection than their own dignity. Donald Trump, unhinged and unrepentant, held a mirror up to America.

The election was by no means a restoration of normalcy. Now, normalcy is the eerie quiet of a White House, an almost-foreign, pre-Trump past we can’t quite return to. While Trump may have finally met his long-awaited moment of reckoning, America has yet to confront its own.

This shouldn’t discount what happened Saturday morning, which was proof that American democracy could still prevail in spite of its faults and flaws. Before a sea of waving flags and honking cars, Biden and Kamala Harris blew a hearteningly fresh breath of air into the night and reawakened a sense of boundless possibility. They reminded me what it meant to be an American: to never lose sight of justice, even if the path grows narrow and treacherous.

But an election alone can’t cure everything. There’s no silver bullet, no cure-all panacea for the underlying ills of inequality and radicalization that continue to ravage this country. Of course, Biden gives America a much-needed chance to heal — but the nation will ultimately need a pill that’s greater than just another man in the White House. Our country’s woes call for a fundamental end to its longstanding socioeconomic immobility and inequality and our own self-constructed realities. Now, more than ever, we need to hold ourselves accountable to the truth. We need to reclaim a morsel of the grace we’ve lost to the decades of bickering and self-willed myopia. The truest struggle for “the soul of America” will have to take place within ourselves. The battle is only half-won. There are no easy answers ahead.

Though who knows what will happen in four years — maybe America will emerge from the rubble for the better. Maybe a humble, hardy Delawarean might just return compromise to our lexicon and politics will not be the self-defeating joke it is right now. Let us take these next few years as an opportunity to reinvent, reimagine, tend to our battle wounds. But above all, let us not forget the smirking, yellow-haired manlest the false comfort of this election creak open the door for his specter to haunt our American dreams again.

HANWEN ZHANG is a first year in Benjamin Franklin college. Contact him at hanwen.zhang.hhz3@yale.edu.