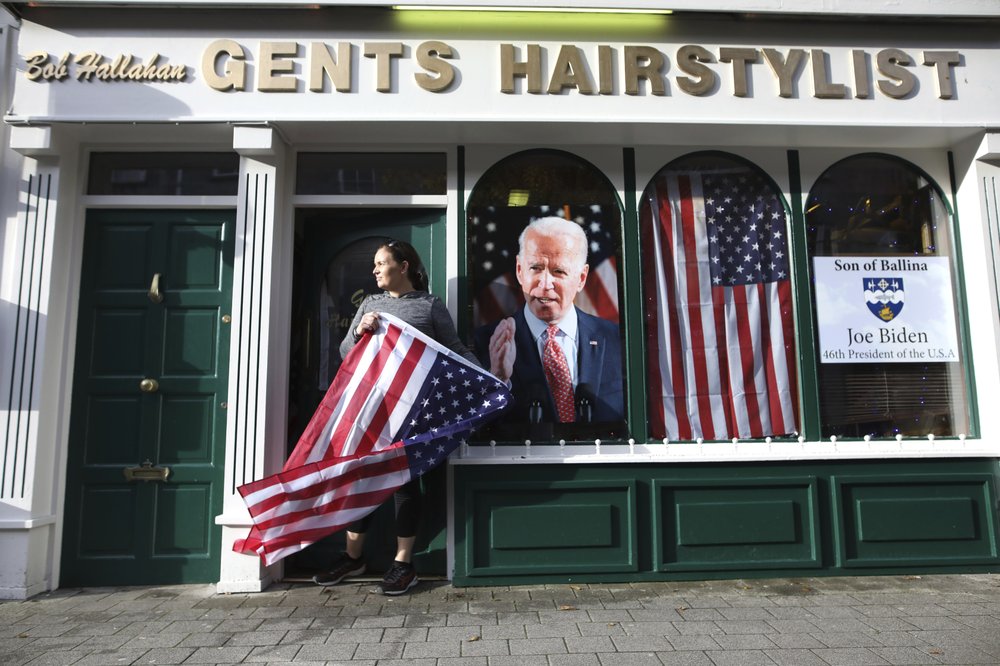 By DAVID BILLER and JOHN LEICESTER

World leaders swiftly congratulated U.S. President-elect Joe Biden on his victory Saturday, cheering it as an opportunity to fortify global democracy and celebrating the significance of Americans having their first woman vice president.

Although U.S. President Donald Trump did not concede defeat, relief was a common theme expressed in many parts of the world to the news that his reelection bid had failed.

“The Americans have chosen their President. Congratulations @JoeBiden and @KamalaHarris! We have a lot to do to overcome today’s challenges. Let’s work together!” tweeted French President Emmanuel Macron.

Other leaders who sent congratulations included German Chancellor Angela Merkel, NATO Secretary General Jens Stoltenberg and Egyptian President Abdel-Fattah el-Sissi. The president of Ukraine, whose country was central to Trump’s impeachment and an attempt by the Trump campaign to paint Biden and his family as corrupt, offered speedy congratulations.

Most Western allies quickly welcomed a fresh start with a new administration in Washington.

“We’re looking forward to working with the next U.S. government,” German Foreign Minister Heiko Maas tweeted. “We want to work in our cooperation for a new trans-Atlantic beginning, a New Deal.”

Word of the victory in Pennsylvania that pushed Barack Obama’s former vice president past the threshold of 270 Electoral College votes needed to take over the Oval Office cascaded around the globe on social media and live news broadcasts, sparking celebrations.

But the election’s outcome inspired disbelief in Slovenia, the homeland of first lady Melania Trump. Prime Minister Janez Jansa was the only world leader who congratulated Trump even before all the votes were counted, and continued to show support after Biden’s win was announced.

It also drew mixed reviews in Iraq. Many Iraqis remember Biden as having been a champion of the U.S. invasion of Iraq in 2003. Activists who have been protesting neighboring Iran’s heavy hand in Iraq, had supported Trump and cheered the U.S. assassination of Iran’s top general in an airstrike at Baghdad’s airport at the beginning of the year.

Still, Iraqi President Barham Salih tweeted his congratulations to Biden, describing him as a friend and trusted partner.

Indeed, detractors were outliers. Congratulations poured in from nations that disagreed with Trump administration policies, as well as from leaders who had gotten along with the Republican president but now were essentially ignoring his claims that the divisive election wasn’t over.

Indian Prime Minister Narendra Modi, who has been known for public displays of bonhomie with Trump, shared a photo of himself with Biden and offered his congratulations “on your spectacular victory!”

British Prime Minister Boris Johnson, another Trump ally, hailed Biden’s win and said he looked forward to “working closely together on our shared priorities, from climate change to trade and security.”

Both Modi and Johnson commented on Harris’ election as the first Black woman vice president. Modi celebrated Harris’ “pathbreaking” success and said her win is a “matter of immense pride” for all Indian-Americans.

Harris’ late mother was from India. Kamala is Sanskrit for “lotus flower,” and Harris gave nods to her Indian heritage throughout the campaign.

Her election struck an immediate chord internationally. It inspired calls in parts of Africa for governments long run by men to think again.

“Kamala Harris lights up the tunnel for many women who continue to advocate for gender equality and inclusion in leadership!” tweeted Anne Waiguru, one of two female governors in Kenya, where the Supreme Court president recently advised the country’s president to dissolve parliament for failing to have enough female lawmakers.

“The time has also come to give our women the chance to occupy such a high office in our country and even the number one position,” tweeted a Nigerian Cabinet minister, Festus Keyamo.

Nigeria’s President Muhammadu Buhari said Biden’s track record “gives us hope that he will add value to the presidency,” and urged the President-elect to tackle the “negative consequences of nationalist politics on world affairs – which have created divisions and uncertainties.”

There was also no immediate statement from Russian President Vladimir Putin.

Many people, particularly in nations that have been fraught with turbulent politics, took Biden’s win as improving the outlook for respect of democracy going forward. Among them was Tanzanian opposition leader Zitto Kabwe, who was arrested and charged with terrorism-related offenses after his country’s bruising presidential election.

“This victory symbolizes the hope for democracy at a time when many other parts of the world are seeing that light diminishing. It gives hope that integrity, honesty and perseverance still matter,” Kabwe said.

In Egypt, where the government launched a crackdown on dissent in recent years, pro-democracy activists welcomed Biden’s win. Many took to social media to express their joy.

“It’s over. The world is without Trump. The sweetest news in 2020,” Anwar el-Hawary, the former editor of Egypt’s Al-Masry Al-Youm newspaper, the country’s largest independent daily, said in a Facebook post.

Argentine President Alberto Fernández tweeted congratulations to Biden and Harris and described their election victory as a “clear expression of the popular will.″

Biden’s win also encouraged people living under populist governments in central Europe that have have eroded democratic norms in recent years. Trump has been friendly with the right-wing government in Poland, and it is widely believed there that his support allowed the Polish government to go far in undermining judicial independence.

“Trump’s defeat can be the beginning of the end of the triumph of far-right populisms also in Europe,” said Donald Tusk a former European Union leader Donald Tusk and former Polish prime minister. “Thank you, Joe.”