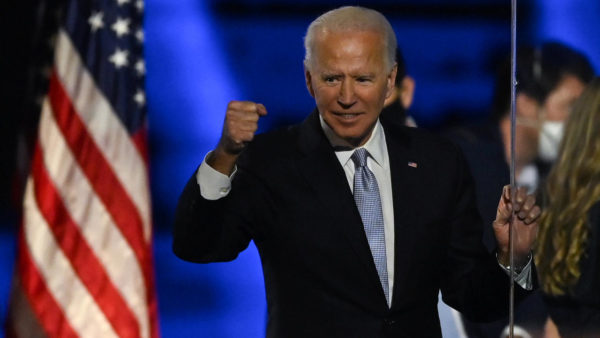 US President-elect Joe Biden began the transfer of power on Sunday that Americans hope will turn the page on four years of divisiveness as his defeated rival Donald Trump refused to concede and continued to cast doubt on the election results.

As congratulations poured in from world leaders and supporters nursed hangovers after a day of raucous celebrations, the 77-year-old Biden and Vice President-elect Kamala Harris, 56, launched a transition website, BuildBackBetter.com, and a Twitter feed, @Transition46.

“The team being assembled will meet these challenges on Day One,” it said in a reference to January 20, 2021, when Biden will be sworn in as the 46th President of the United States.

Biden, who turns 78 on November 20, is the oldest person ever elected to the White House. Harris, the junior senator from California, is the first woman and first Black person to be elected vice president.

Biden has already announced plans to name a task force on Monday to tackle the coronavirus pandemic which has left more than 237,000 people dead in the United States and is surging across the country.

Biden, just the second Catholic to elected US president, was attending church Sunday morning in his hometown of Wilmington, Delaware, as Trump was headed for the golf course.

Trump, 74, was playing golf at his club near Washington on Saturday morning when the US television networks announced that Biden had secured enough Electoral College votes for victory and he returned for another round on Sunday morning.

On Saturday, Trump fired off tweets saying he had won the election “by a lot” and he continued to make unsubstantiated claims of voter fraud on Twitter on Sunday.

In one tweet, he cited an ally, former Republican House speaker Newt Gingrich, as saying the “best pollster in Britain wrote this morning that this clearly was a stolen election.”

In another series of tweets, Trump quoted a George Washington University law professor who testified on his behalf during his impeachment in Congress.

Trump left out another part of the professor’s opinion in which he stated that while there is “ample reason to conduct reviews” there is “currently no evidence of systemic fraud in the election.”

The Trump campaign has mounted legal challenges to the results in several states but no evidence has emerged so far of any widespread irregularities that would overturn the results of the election.

Speaking on CNN’s “State of the Union” on Sunday, Symone Sanders, a senior advisor to Biden, dismissed the court challenges as “baseless legal strategies.”

Biden received nearly 74.6 million votes to Trump’s 70.4 million nationwide and has a 279-214 lead in the Electoral College that determines the presidency.

Only two Republicans senators — Mitt Romney and Lisa Murkowski — have congratulated Biden on his victory and Democratic Representative James Clyburn of South Carolina said the Republican Party has a “responsibility” to help convince Trump that it is time to concede.

“What matters to me is whether or not the Republican Party will step up and help us preserve the integrity of this democracy,” Clyburn said on CNN’s “State of the Union.”

Romney, who voted to convict Trump at his impeachment trial, said the president has “has every right to call for recounts” but he should be careful with his “choice of words.”

“I’m convinced that once all remedies have been exhausted, if those are exhausted in a way that’s not favorable to him, he will accept the inevitable,” Romney said.

The Utah senator added that he “would prefer to see the world watching a more graceful departure, but that’s just not in the nature of the man.”

Speaking on ABC’s “This Week,” another Republican senator, Roy Blunt of Missouri said “it’s time for the president’s lawyers to present the facts and it’s time for those facts to speak for themselves.”

“We will work with Biden if he wins, but Trump has not lost,” Graham said on the Fox News show “Sunday Morning Futures.” “Do not concede, Mr. President. Fight hard.”

Another Trump ally, House minority leader Kevin McCarthy, told the same show it was too early to call the election.

“What we need in the presidential race is to make sure every legal vote is counted, every recount is completed, and every legal challenge should be heard,” McCarthy said.

In a victory speech in Wilmington on Saturday, Biden promised “not to divide but unify,” and reached out directly to Trump supporters, declaring “they’re not our enemies, they’re Americans.”

“Let’s give each other a chance,” he said, urging the country to “lower the temperature.”

While only a handful of Republicans have congratulated Biden, the leaders of Britain, Germany, France and other European countries have extended their congratulations, along with Canada, India and Japan.