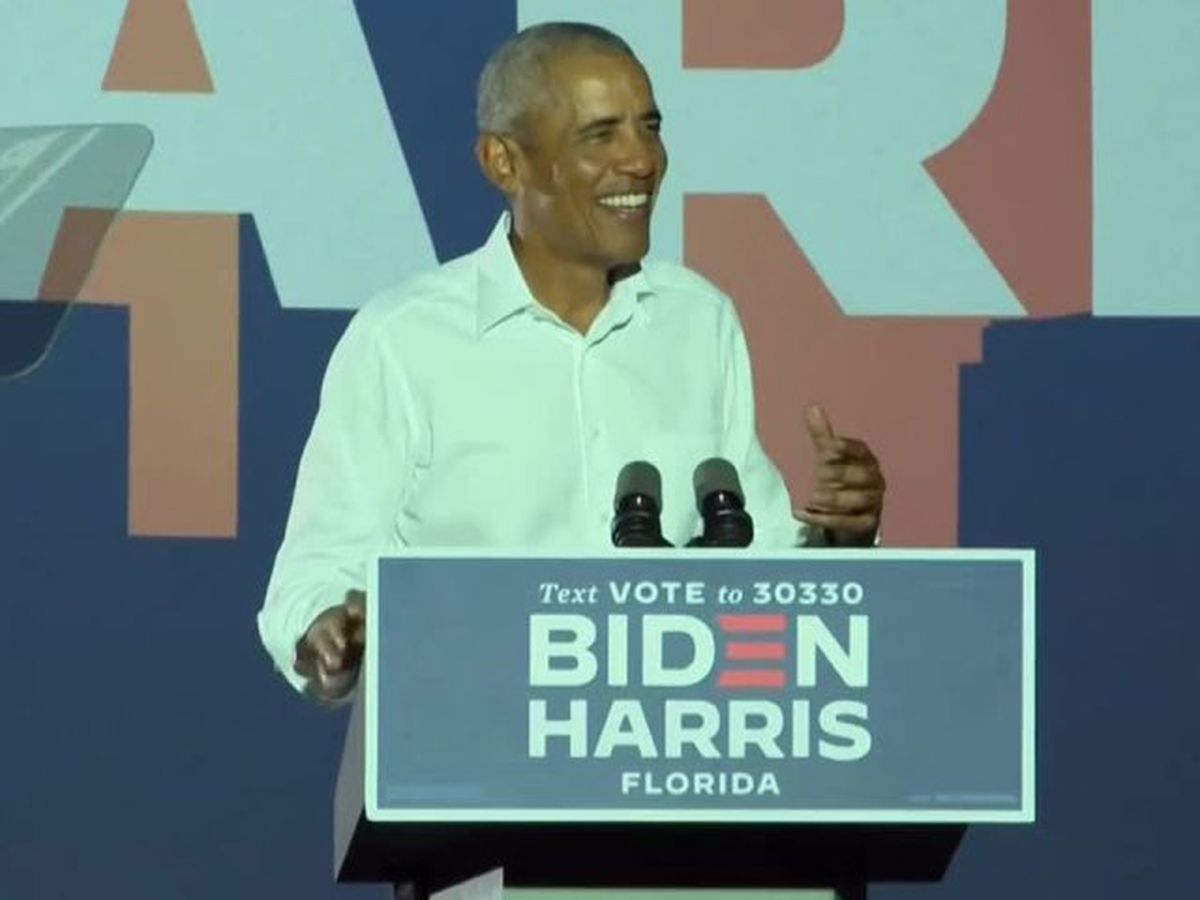 Barack Obama , the former US president branded president Donald Trump a “two-bit dictator” as he held an election eve rally in Miami, Florida to give a final push for his former deputy Joe Biden.
Share:

Barack Obama branded Donald Trump a “two-bit dictator” as he held an election eve rally in Miami, Florida to give a final push for his former deputy Joe Biden.

The former president criticised his successor for casting doubt on the results of Tuesday’s presidential election and suggested Mr Trump could attempt to “declare victory before all the votes are counted tomorrow.”

“That’s something a two-bit dictator does,” Mr Obama told the drive-in rally at Florida International University’s Miami campus. “If you believe in democracy, you want every vote counted.”

Mr Obama added that, unlike Mr Trump: “With Joe and Kamala you’re not going to have to think about them every single day.”

“You’re not going to have to argue about some crazy tweet that the president sent out this morning,” he joked. “You’ll be able to go about your lives, know that the president’s doing his job instead of suggesting we inject bleach.

Mr Obama has significantly increased his campaign appearances for Mr Biden, who served as his Vice President for eight years, in the last week. Still seen as one of America’s most popular recent presidents, the Biden campaign has deployed Mr Obama to the battleground state of Florida twice in the last week as it seeks to maximimise voter turnout.

Mr Obama’s closing pitch to voters in the Sunshine State leaned heavily on the importance of the Hispanic vote – a demographic which could ultimately decide the outcome in Florida.

Mr Trump has been furiously pushing the idea that Mr Biden and his party are driven by radical liberals – a message that has boosted his support among immigrant communities who have left socialist countries in Latin America.

Mr Obama pushed back on the Republican messaging around Mr Biden, saying: “You would think he was having coffee with Castro every morning”.

Mr Obama chose Miami-Dade County, the state’s most populous and one which will prove decisive for Florida’s overall result, to make his final push for Mr Biden.

He described the Democratic presidential candidate as a crucial partner during his most difficult decisions in the Oval Office, saying Mr Biden “made me a better president. And he has the character and experience to make this a better country”.

By contrast, Mr Obama said, Mr Trump treats the presidency as nothing more “than a reality show so he can get himself attention.”

Mr Obama warned that Mr Trump’s re-election would be the death knell for the Affordable Care Act (ACA), often referred to as Obamacare, the signature healthcare policy of his time in office.

More Americans are enrolled in Obamacare in Florida than any other US state, with more than 1.9 million registering for the programme in 2020. Mr Trump is currently fighting in the Supreme Court to repeal the ACA and Democrats are hoping this is dissuading Hispanic voters from voting for the president.

“So when Trump said he hopes the Supreme Court overturns the ACA, he is saying he wants to take away your healthcare,” Mr Obama said, underscoring that many Hispanics had lost coverage under the Trump administration.

The former president was preceded by Despacito singer Luis Fonsi, who told the crowd: “Latinos are going to make the difference in this election … let’s vote tomorrow”