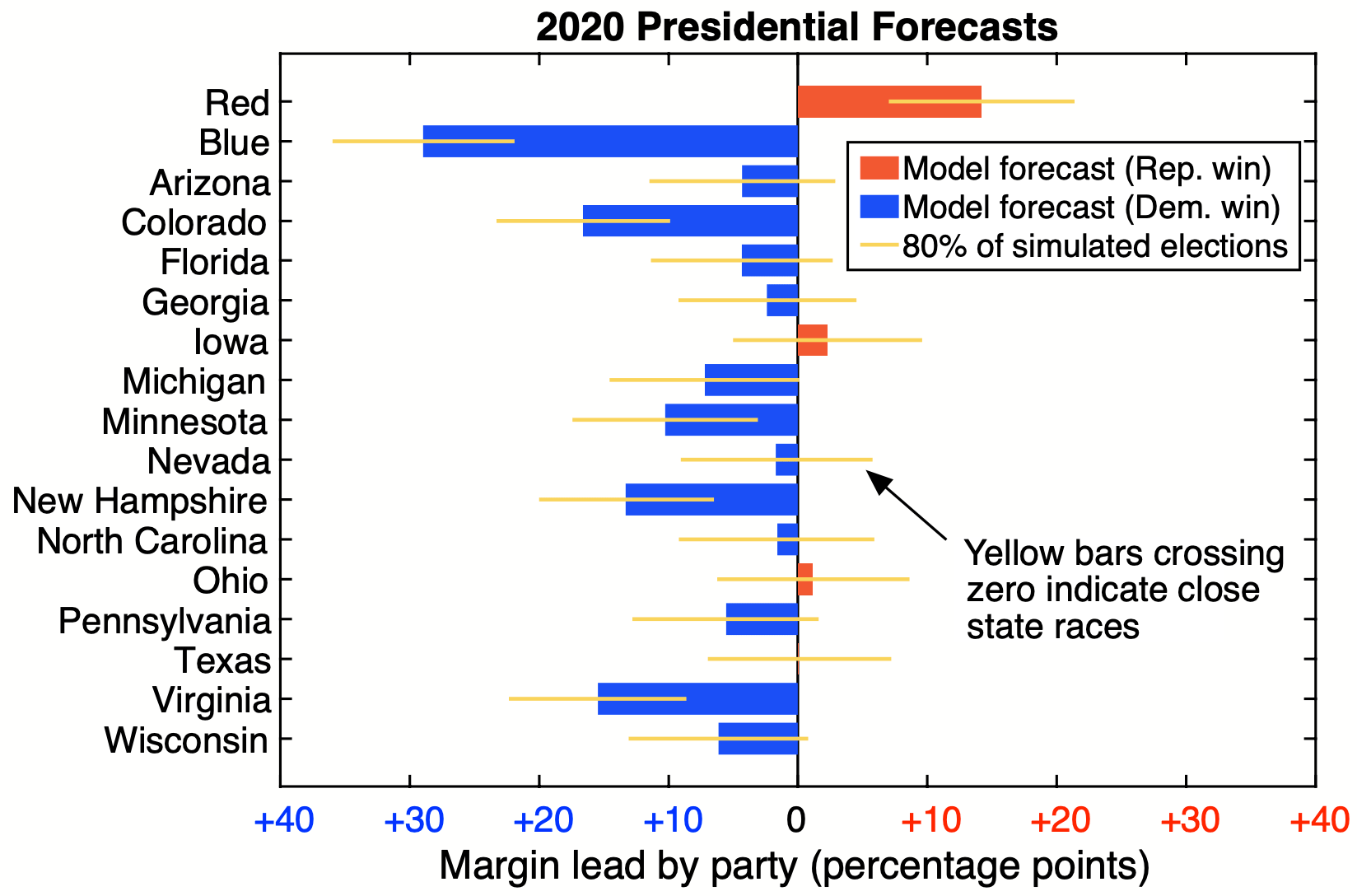 A new election forecasting approach uses mathematical modeling to describe how voters in different states may influence each other during an election year.

To simulate how interactions between voters may play a role in the upcoming presidential, gubernatorial, and senatorial elections, a Northwestern University research team is adapting a model that is commonly used to study infectious diseases.

“Experts like the team at FiveThirtyEight account for the fact that, if you misidentify how Pennsylvania will vote, then you might also misidentify how Ohio will vote because those states have some similar features,” said Northwestern’s Alexandria Volkening, who leads the research. “Such symmetric relationships between states are important. Using a disease-transmission model, we also introduce the possibility of asymmetric relationships, or influence. For example, a candidate campaigning in Florida might be featured in the news in Ohio and influence the voters there.”

The research published online in SIAM Review. Viewers can follow the 2020 forecast here.

Volkening is an NSF–Simons Fellow in Northwestern’s NSF–Simons Center for Quantitative Biology and in the McCormick School of Engineering’s Department of Engineering Sciences and Applied Mathematics. The paper’s coauthors are Daniel Linder of Augusta University, Mason Porter of UCLA and Grzegorz Rempala of The Ohio State University. Their 2020 forecasts are in collaboration with Volkening’s students (Samuel Chian, William He and Christopher Lee), who are undergraduates in the McCormick School of Engineering.

The project began when Volkening and her coauthors aimed to better understand election forecasting.

“My background is not in election forecasting,” said Volkening, who often applies math to biological questions. “But I’m interested in problems in complex systems, where individuals come together to create group dynamics. Mathematical models can be used to describe the behavior of cells in developmental-biology applications and the interactions of voters leading up to elections.”

Volkening and her team wanted to use a data-driven, mathematical modeling approach. They settled on adapting a so-called “susceptible-infected-susceptible” compartmental model that is typically used to study the propagation of illnesses such as the flu.

“In the future, we may be able to tease out how states are influencing each other and pinpoint more influential states,” Volkening said. “We’d like to explore how interactions among states change over time.”

To generate each of their 2020 forecasts, the researchers use polling data from FiveThirtyEight to simulate 10,000 potential election outcomes. At the time of this article, the model forecasts a victory for Biden 89.03% of the time, and a victory for President Donald Trump 10.78% of the time.

“It’s been exciting to run the model continuously over time,” said He, a sophomore studying applied mathematics and statistics. “We don’t just have a single forecast. We update our website regularly, so we can track how opinions are changing.”

Although 89% may sound like Biden has a high chance of winning the election, Volkening is quick to point out that voter turnout and undecided voters could change this.

“In many states, the margin of victory that we are forecasting for Biden is lower than the percentage of undecided voters,” she said. “If undecided voters turn out strongly for Trump, we could certainly see a Republican outcome.”

The paper, “Forecasting elections using compartmental models of infection,” was supported by the Mathematical Biosciences Institute, the National Science Foundation (grant numbers DMS-1440386, DMS-1853587 and DMS-1764421) and the Simons Foundation (grant number 597491-RWC). The students’ research has been supported by Northwestern’s Office of Undergraduate Research and NSF DMS-1547394.