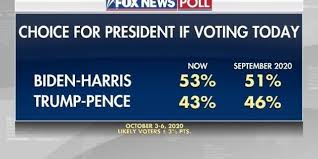 Donald Trump appears to be losing out on the white working class male support that was so integral to his election win in 2016 as the president himself lashes out at the latest dire projection from Fox News, insisting the survey is “totally FAKE” and that all forecasts ahead of the 3 November ballot are likely to be wrong.

Barack Obama meanwhile gave a rousing speech in support of his former deputy Joe Biden in Philadelphia on Wednesday, tearing into Trump and urging young Americans to: “Vote like never before and leave no doubt”.

The latest Quinnipiac University survey finds Biden leading by eight percentage points in Pennsylvania, his home state and a crucial battleground. The Democrat also appears to be making significant gains in Texas, a Republican stronghold, with Quinnipiac placing the two candidates level on 47 percentage points each.

It’s fair to say that no presidential candidate has gone in more for the white voter than Donald Trump.

His candidacy was born out the birther movement against President Obama’s citizenship.

But here’s the irony: His biggest problem in his quest for reelection, if the best of the recent polls are to be believed, is a historic collapse in winning the support of the white voter.

His biggest problem in his quest for reelection, if the best of the recent polls are to be believed, is a historic collapse in winning the support of the white voter

Donald Trump has claimed to be “leading in all of the states mentioned” in the latest Fox News  poll, which shows him trailing Joe Biden in three states he won four years ago.

Trump, meanwhile, has a slim three point lead in Ohio (45-48 per cent), which he won by eight percentage points in 2016.

The poll, like many others at this stage, point to tight races in a swathe of states that are expected to deliver either candidate the presidency after 3 November.

If the president is right about one thing, it’s that we’ll all “soon see” the results.

If Joe Biden defeats President Donald Trump next month, he’ll quickly face a new challenge: standing up a new administration to lead a divided nation through a series of historic crises.

After making Trump’s handling of the coronavirus pandemic a centrepiece of his campaign, Biden will have to show that his team can better handle the public health crisis.

“This will be one of the most important, most difficult and yes most costly transitions in modern American history,” Chris Korge, the Democratic National Committee’s finance chair, warned donors in a recent letter obtained by The Associated Press. “There is so much work to do.”

…The short answer to that question, is no.

The responses proved even more damning for “most members of Congress”, with only 29 per cent of those polled saying they believed lawmakers deserved re-election in less than two weeks time.

When the same poll was carried-out in January, some 50 per cent of voters said Mr Trump deserved reelection to a second term.