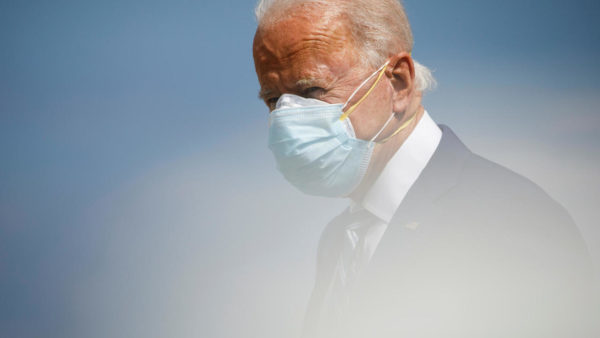 Joe Biden heads for Florida on Tuesday to court elderly Americans who helped elect Donald Trump four years ago but appear to be swinging to the Democratic candidate for the White House this time around amid the coronavirus pandemic.

Biden, at 77 the oldest Democratic nominee ever, is to “deliver his vision for older Americans” at an event in the city of Pembroke Pines, north of Miami, his campaign said.

The former vice president’s visit to Florida comes a day after Trump held a campaign rally in the Sunshine State, his first since his hospitalization for Covid-19.

Unlike Biden’s small, socially distanced gatherings, thousands of supporters packed an airport tarmac for the president’s return to the campaign trail.

Trump, 74, is to host another rally Tuesday night in Johnstown, Pennsylvania, followed by visits to Iowa and North Carolina this week as part of a push to make up ground on Biden, who has a double-digit lead in the national polls ahead of the November 3 vote.

Florida and its 29 votes in the Electoral College went to Trump in 2016, helping propel his upset victory over Democrat Hillary Clinton.

Americans over the age of 65 favored Trump over Clinton by a margin of 53 percent to 45 percent, according to the Pew Research Center and exit polls.

But the latest polls show a dramatic shift away from Trump among seniors this time around, driven in large part by his handling of the Covid-19 pandemic which has taken a disproportionate toll among the elderly.

A recent NBC/Wall Street Journal poll had Biden leading Trump among seniors by 27 points — 62 percent to 35 percent — while a CNN/SSRS poll had him up by 21 points among Americans 65 and older — 60 percent to 39 percent.

A poll of likely Florida voters released on Tuesday by Florida Atlantic University (FAU) gave Biden a 51 percent to 47 percent lead in the state.

With three weeks until Election Day, Democratic nominee @JoeBiden has reclaimed the lead in Florida over @RealDonaldTrump, according to the latest survey from @FAUpolling. https://t.co/366A0bwX9b@faubusiness @PaulOwers @KevinWagnerPhD pic.twitter.com/UPBLhWpQNB

“Joe Biden continues to be competing better for senior voters than Hillary Clinton did in 2016, and that could be the difference in Florida,” said Kevin Wagner, a political science professor at FAU.

Forty-four percent of those polled said Trump’s handling of the coronavirus crisis was good or excellent while 50 percent said it was poor or terrible.

Trump, who called seniors his “favorite people in the world” after his release from hospital and promised them “the same care I got,” brushed aside the polls at his Monday night rally.

Trump also continued to try to depict Biden as being too old and unfit for office, pointing to a moment on Monday when he appeared unable to remember the name of Mitt Romney, the Republican senator from Utah, and mistakenly said he was running for Senate.

“Sleepy Joe Biden had a particularly bad day today,” Trump tweeted. “He couldn’t remember the name of Mitt Romney, said again he was running for the U.S. Senate, and forgot what State he was in.

“If I did any of this, it would be disqualifying. With him, he’s just Sleepy Joe!”

Romney, meanwhile, issued an appeal to both campaigns and the country at large to “lower the heat,” saying the “consequence of the crescendo of anger leads to a very bad place.”

Romney, the only Republican senator to vote to convict Trump during his impeachment trial earlier this year, said he was “troubled by our politics.”

“It has moved away from spirited debate to a vile, vituperative, hate-filled morass that is unbecoming of any free nation — let alone the birthplace of modern democracy,” he said in a statement.

Romney condemned Trump for calling Democratic vice presidential candidate Kamala Harris a “monster” and for urging the “Justice Department to put the prior president in jail.”

“Democrats launch blistering attacks of their own — though their presidential nominee refuses to stoop as low as others,” he said.

“The world is watching America with abject horror,” Romney added. “It’s time to lower the heat. Leaders must tone it down.”