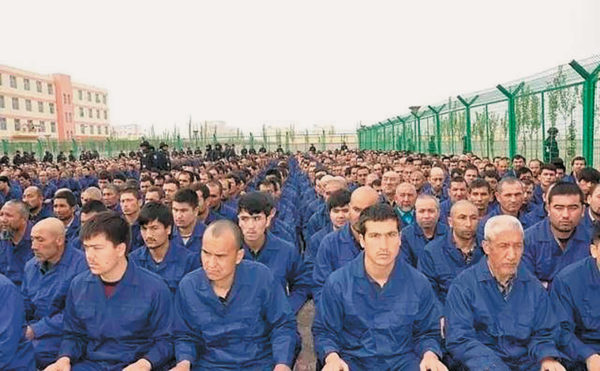 Uighur detainees listening to a “deradicalization” presentation at a camp, in a photo posted to the Xinjiang Judicial Administration’s WeChat account, Hotan Prefecture, Xinjiang, 2017
Share:

The US, Japan and many EU nations joined a call on Tuesday urging China to respect the human rights of minority Uighurs, and also expressing concern about the situation in Hong Kong.

“We call on China to respect human rights, particularly the rights of persons belonging to religious and ethnic minorities, especially in Xinjiang and Tibet,” said German UN ambassador Christoph Heusgen, who led the initiative during a meeting on human rights.

Among the 39 signatory countries were the United States, most of the EU member states including Albania and Bosnia, as well as Canada, Haiti, Honduras, Japan, Australia and New Zealand.

“We are gravely concerned about the human rights situation in Xinjiang and the recent developments in Hong Kong,” the declaration said.

“We call on China to allow immediate, meaningful and unfettered access to Xinjiang for independent observers including the UN High Commissioner for Human Rights,” it added.

Immediately afterward, the envoy for Pakistan stood up and read out a statement signed by 55 countries, including China, denouncing any use of the situation in Hong Kong as an excuse for interference in China’s internal affairs.

Addressing Germany, the United States and Britain, Chinese ambassador Zhang Jun criticized what he called their “hypocritical” attitude and demanded that the three countries “put away your arrogance and prejudice, and pull back from the brink, now.”

The organization Human Rights Watch praised the fact that so many countries had signed on to the declaration “despite China’s persistent threats and intimidation tactics against those who speak out.”

In 2019, a similar text drafted by Britain only garnered 23 signatures.

Western diplomats have said that China is piling on more pressure each year to dissuade UN member states from signing such statements, threatening to block the renewal of peacekeeping missions for some countries or preventing others from building new embassy facilities in China.

On Monday, China led a group of 26 countries in a joint declaration calling for an end to US sanctions which they said violate human rights during the struggle to combat the coronavirus pandemic.

Last month, the Australian Strategic Policy Institute (ASPI) said it had identified more than 380 “suspected detention facilities” in the Xinjiang region, where China is believed to have held more than one million Uighurs and other mostly Muslim Turkic-speaking residents.

In the United States, the House of Representatives passed a bill at the end of September that aims to ban imports from Xinjiang, contending that abuses of the Uighur people are so widespread that all goods from the region should be considered made with slave labor.