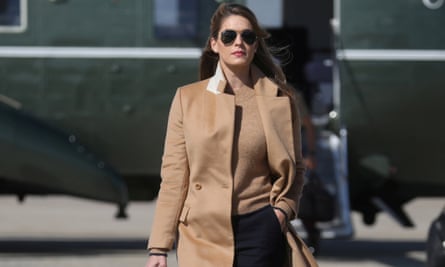 Counselor to the President Hope Hicks walks from Marine One to accompany President Donald Trump aboard Air Force One as he departs Wednesday, Sept. 30, 2020, at Andrews Air Force Base, Md. (AP Photo/Alex Brandon)
Share:

“The First Lady and I are waiting for our test results. In the meantime, we will begin our quarantine process!” Trump tweeted after earlier suggesting that he may quarantine.

Trump’s tweet came minutes after the White House disclosed his schedule for Friday, which includes White House meetings, a roundtable with supporters and an evening campaign rally in Florida. The White House didn’t immediately respond to an inquiry about whether the president’s quarantine would result in events being canceled.

After NBC News and other outlets reported on Hicks’ positive test, Trump himself confirmed it Thursday night in an interview with Fox News’ Sean Hannity. He also said that he and first lady Melania Trump had just been tested and were awaiting results to come either Thursday night or Friday.

“She did test positive. She is a hard worker, a lot of masks, she wears masks a lot. She tested positive. I just went out with the test, we will see,” Trump said. “We spend a lot of time, the first lady just went and got a test also. Whether we quarantine, whether we have, we don’t know.”

He added: “We will see what happens. Who knows?”

Centers for Disease Control guidelines say people should stay home and quarantine if they might have been exposed to the virus. The agency says people should quarantine for 14 days. Two weeks from Thursday is Oct. 15, the date of the second presidential debate between Trump and Democratic rival Joe Biden.

Hicks, who has been known to spend a lot of time with Trump, had traveled with the president to the debate Tuesday night in Cleveland. She was seen not wearing a mask.

Trump, 74, himself rarely wears a mask and has mocked Biden, 77, for often wearing face coverings.

The Trump campaign referred questions to the White House. A White House spokesman issued a statement about the administration’s Covid-19 protocols.

“The President takes the health and safety of himself and everyone who works in support of him and the American people very seriously,” Judd Deere, the spokesman, said in a statement. “White House Operations collaborates with the Physician to the President and the White House Military Office to ensure all plans and procedures incorporate current CDC guidance and best practices for limiting COVID-19 exposure to the greatest extent possible both on complex and when the President is traveling.”

Hicks’ positive test was first reported by Bloomberg News. Bloomberg also reported that Hicks had traveled with Trump to a rally Wednesday night in Minnesota.

The New York Times reported that the White House knew about Hicks’ condition Wednesday night, and that she is under quarantine.

The latest revelation comes as coronavirus cases reach nearly 7.23 million in the United States, according to a Johns Hopkins University tally. Worldwide, the virus has infected about 34 million and killed more than 1 million. At least 206,971 have died in the U.S.

Hicks, 31, is among the highest-ranking people in Trump’s orbit to have reportedly tested positive for the coronavirus.

In July, Trump’s national security advisor, Robert O’Brien, tested positive for the coronavirus. At the time, the White House said that O’Brien was experiencing “mild symptoms” and was “self-isolating and working from a secure location off-site.”

“There is no risk of exposure to the President or the Vice President. The work of the National Security Council continues uninterrupted,” the White House said in a July statement.

Other administration officials have previously been diagnosed with the coronavirus.

In May, Vice President Mike Pence’s press secretary, Katie Miller, tested positive for Covid-19, as did a personal valet for Trump, who is responsible for serving the president his meals. Kim Guilfoyle, a top Trump campaign figure and girlfriend to Donald Trump Jr., also had tested positive and recovered.

Hicks, one of Trump’s favorite aides and a former White House communications director, rejoined the administration earlier this year to work as an assistant to Jared Kushner, the president’s son-in-law and senior advisor. Between her White House stints, she landed some lucrative gigs, including a top role at Fox News parent Fox Corp.