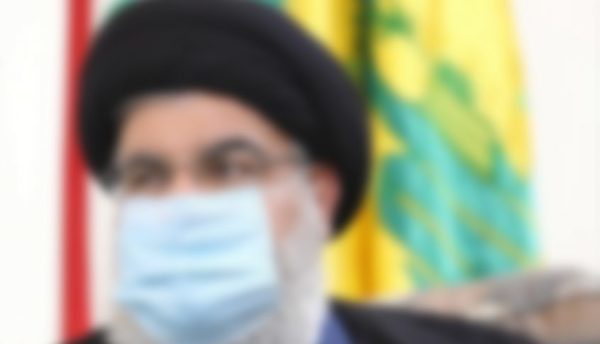 File photo of Hezbollah chief Hassan Nasrallah July 25, 2020 . He called on his followers to wear the mask to protect them against the Coronavirus. The number of COVID19 cases in Lebanon has surged since the massive Aug 4 explosion
Share:

Hezbollah’s leader said on Tuesday his Shi’ite movement welcomed French efforts to help Lebanon out of crisis but that did not mean French President Emmanuel Macron could act like the country’s ruler.

In a televised address, Hassan Nasrallah said the heavily armed, Iran-backed Hezbollah remained ready for dialogue under the French roadmap to pull the nation out of financial meltdown. But he called for reviewing what he called “patronizing behaviour”.

Macron, president of former colonial power France who has led foreign aid efforts, rebuked Lebanese sectarian leaders for failing to swiftly agree a new government. It was the first step in the French plan seeking to rally them to launch reforms that could unlock billions of dollars: cash Lebanon desperately needs.

The French president said he was “ashamed” of Lebanese politicians and deemed it a betrayal as his initiative faltered.

Macron criticized Lebanon’s two main Shi’ite parties, Hezbollah and its ally Amal, whose demand to name some ministers, particularly the finance post, was at the heart of the logjam.

“Who says it’s a betrayal?” Nasrallah retorted on Tuesday. “We did not commit to agreeing a government in any shape or form.”

“We welcomed President Macron when he visited Lebanon and we welcomed the French initiaitve, but not for him to be judge, jury and executioner, and ruler of Lebanon.”

Narallah accused former PM Saad al-Hariri, along with other former prime ministers, of pulling the strings in an attempt to exploit the French intervention to score political points. He blamed them for seeking to sideline Hezbollah and its allies, which hold a majority in parliament.

Prime Minister-designate Mustapha Adib, tasked with forming a new Cabinet, quit at the weekend amid wrangling over seats. He had sought to shake up control of ministries, some of which have been held by the same factions for years, including the finance post – which will have a hand in drawing up plans for moving out of the economic collapse.

The crisis, Lebanon’s worst since its 1975-1990 civil war, has pushed the country to the breaking point, eroding its currency. Macron swept in after the huge August blast at Beirut’s port, which killed nearly 200 people, ravaged the capital and prompted the government to resign.

The Amal Movement, which picked the last finance minister, said earlier it respected Macron’s role but was “surprised” by his comments holding it responsible for the deadlock.

As for Adib’s failed attempt to form a new government, Nasrallah said Hezbollah “cannot stay out of the government” because it fears for the country and its people.

“We should be in the government to protect the back of the resistance, so that Lebanon does not witness a government similar to the May 5, 2008 government,” Nasrallah added, referring to former PM Fouad Siniora’s government and its decision to dismantle Hezbollah’s private military telecommunications network that year. A possible reference to May 8 2008 when Hezbollah for the first time pointed its guns against the Lebanese people , took control of the western half of Beirut and tried but failed to occupy Mount Lebanon in what the western backed March 14 governing coalition called “an armed and bloody coup”. Several people were killed in the attack including the son of Hezbollah’s number 2 Naim Qassem

“What if a new government decides to sell the state’s assets? What if a government accepts the conditions of the IMF without any discussions,” Nasrallah said.

“The naming of ministers for all sects in Lebanon by a single person is dangerous for the country,” Nasrallah warned.