Lebanon’s economy is going to pot — in a good way, it hopes 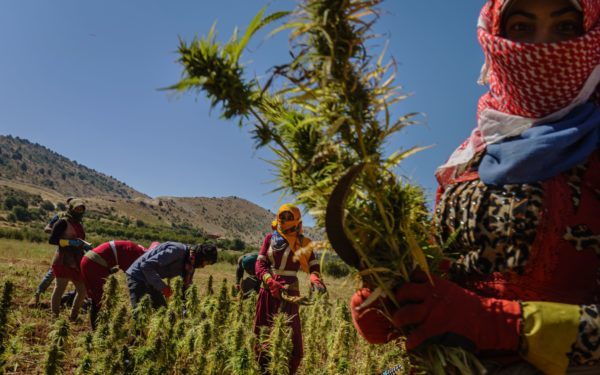 YAMMOUNEH, Lebanon —  On a mild September morning, about two dozen girls and women, swathed in brightly colored shawls that revealed only their eyes, picked through a verdant field. With sickles that glinted in the waning summer sun, they reaped spiky-leaved stalks stretching to the foot of the nearby hills.

The crop was cannabis. And it’s a lifeline, advocates say, that Lebanon urgently needs.

The country is scrabbling to escape an existential, multilayered crisis that has gutted the currrency to less than a quarter of its previous value, brought the specter of shortages to a place renowned for its excess and spurred a full-scale rejection of the country’s ruling order.

Most of all, Lebanon is broke. It produces very little, relying on imports for almost everything, and dollars are scarce.

In its desperate drive for foreign currency, it’s trying to develop homegrown industries, including taking advantage of what is arguably its most famous export: Lebanese hash.

This tiny Mediterranean country of 6.8 million people is, after all, responsible for 6% of the global cannabis supply, making it the world’s third-largest exporter of the stuff, according to a report last year by the U.N.’s Office on Drugs and Crime — this, despite the fact that cannabis had until recently been illegal.

In April, with the country slammed by the first wave of the COVID-19 pandemic, the lame-duck government still found time to legalize cannabis for medicinal and industrial purposes, making Lebanon the first Arab nation to do so.

The move now needs to be codified and implemented. The idea, officials say, is for the state to set up a regulatory authority that would issue licenses to private companies for farming, processing and selling cannabis and its derivative products. That could reel in potentially $1 billion in revenue, attract fresh investments in the country and generate new tax receipts.

The village of Yammouneh is one of the focal points of this plan. It unfurls around a placid lake, which perfectly reflects a landscape of tree-studded mountains and green fields.

As you enter Yammouneh, graffiti greets you on a nearby shack calling for America’s death and pledging fealty to “the Resistance” — a reference to Hezbollah, the Iran-backed Shiite armed faction and political party, which dominates this northeastern village of some 5,000 people, as well as much of Lebanon’s eastern regions. (Washington designates Hezbollah as a terrorist organization.)

Officially, Hezbollah is against hash; it was one of the few groups to object to legalization. But the Party of God, as it’s also known, appears to have reached a detente with cannabis farmers, said Hilal Khashan, a professor of political science at the American University of Beirut.

“The state can’t stop them. Hezbollah can’t stop them and needs the support of this constituency. And these people are living off of cannabis,” Khashan said in a phone interview.

He added that Hezbollah recruits members in these areas and also benefits from facilitating the smuggling of marijuana across the border.

Ali Shreyf, a village notable, or mukhtar, represents a good example of that understanding with Hezbollah. In a visit to a field a few minutes’ drive from his home in Yammouneh, the trim 50-year-old with more salt than pepper in his hair pointed to an apple orchard standing alongside stalks of cannabis.

“You have two brothers. The one in Hezbollah plants apples, the other one plants marijuana. It’s a matter of beliefs,” he said.

Shreyf’s business is an inherited one: His father began growing cannabis around the 1920s. The trade bloomed during Lebanon’s devastating 15-year civil war, which ended in 1990.

Afterward, the state launched an eradication campaign, but those efforts foundered in 2011, when the conflict in neighboring Syria began and forced Lebanon’s security services to focus on new threats. (In 2017, nearly 100,000 acres of land in Lebanon were planted with cannabis, according to U.N. statistics.)

The state also tried offering incentives to farmers to cultivate other crops. But the problem is that cannabis is easy to grow; it thrives in Yammouneh’s rocky soil, cool climate and high humidity. Not much else does, and besides, the profits wouldn’t come close.

Around Shreyf, the women in their shawls continued their reaping, the wind heady with the fresh scent of cut grass and the earthiness of marijuana.

“Yalla, girls. Yalla,” shouted Muhannad, the foreman of the crew, who declined to give his surname. Like most of the field workers here, he’s from the Syrian city of Raqqa, once Islamic State’s declared capital, and escaped as a refugee to Lebanon.

Once cut, the stalks remain on the ground for a week to dry before being transported to warehouses. There they are cured until late November, when the cold makes the plant’s sticky resin brittle and ready for sifting.

The plants are placed inside a drum with mechanical rollers that shake off some of the resin into keyf, cannabis powder that can then be pressed into blocks of hash. Higher-quality keyf — which means “pleasure” in Arabic — is also extracted by rubbing the plants against a super-fine silk cloth or mesh.

Half-pound blocks of keyf are sold locally or smuggled abroad by traffickers who take hash overland to Jordan and Saudi Arabia or via Syria’s ports to Africa and Europe,

Smugglers have had to switch techniques to evade detection, Shreyf said.

“They used to put them under fruits,” he said. “Then they planted them in electric appliances. When that was discovered, they put hash inside stones and wheel wells of cars.”

A cannabis farmer can make between $10,000 to $15,000 a year, Shreyf said. The smugglers make the big profits, estimated to be from $1 billion to $2 billion dollars collectively.

But keyf is not the only use for the plant. “People use this for rope, paper currency, even clothes,” Shreyf said, adding: “We use it for nothing.”

He took out a strip of hemp. “Try to break it,” he said to a visiting reporter. A few vigorous tugs later, the strip remained unbroken.

Because legalization has yet to be codified, Shreyf’s activities technically remain a criminal offense. But he doesn’t care, and instead sees legalization as a ploy by Lebanon’s notoriously corrupt political class to benefit cronies.

“They’ve stolen everything except for the cannabis,” he said. “Now they want that, too.”

Supporters of the new law, including Ali Shoman, an official pushing for the creation of a cannabis growers’ syndicate, said legalization would help farmers.

“Is it better to enter the house through the window or the door? The cannabis they’re planting now they can’t bring out legally, nor is it used to produce alternative products,” he said.

Antoine Habchi, one of the architects of the law, agreed.

“Who is benefiting now? Only the distributor, and they can do that because of political cover,” the lawmaker said, adding that a raft of Canadian and Chinese companies had already expressed interest in using Lebanese cannabis for oils, perfumes and other products.

“When farmers work legally and the merchant works with them, then the state would have to deal with them,” Habchi said. “Through the law the farmer is liberated.”

But the plan faces several snags.

One is that the law allows cannabis containing an as-yet-unspecified percentage of tetrahydrocannabinol, or THC, the mind-altering compound found in pot. Lebanese cannabis contains up to 18% THC, a relatively high proportion, potentially forcing farmers to switch to a different seed.

Another problem is that the bill bars anyone with a criminal record from obtaining a cannabis license. That would effectively rule out most of the current farmers and smugglers, said Talal Shreyf, Yammouneh’s mayor. (He and Ali Shreyf belong to one of the village’s dominant clans.)

“If people here are wanted, they’re wanted for growing marijuana. Whoever makes such a decision is crazy, because these are the same people who are planting,” he said.

The government had discussed a controversial amnesty bill, but it was unclear whether it would include those charged with drug-related offenses.

“You need to turn a new page with these people — you can’t deal with them otherwise,” the mayor said.

Perhaps the biggest challenge is Lebanon’s dysfunctional government. Politicians are still flailing to form a government after the massive Aug. 4 explosion in Beirut’s port — which was blamed on chronic mismanagement and corruption — toppled the previous Cabinet. On Saturday, the prime minister-designate stepped down, leaving the country in limbo.

“We’re talking about missed opportunities,” said Habchi, the parliament member. “Instead of us grabbing at chances, you feel that administrative issues are continuing with no end in sight.”

Shoman echoed his point. “We’ve been screaming at the government for years: ‘We don’t want money — just get out of the way.’

Nabih Bulos is the Middle East bureau chief for the Los Angeles Times. Since 2012, he has covered the aftermath of the “Arab Spring” revolution as well as the Islamic State’s resurgence and the campaign to defeat it. His work has taken him to Syria, Iraq, Libya, Turkey, Lebanon, Jordan and Yemen as well as on the migrant trail through the Balkans and northern Europe. A Fulbright scholar, Bulos is also a concert violinist who has performed with Daniel Barenboim, Valeri Gergyev and Bono.