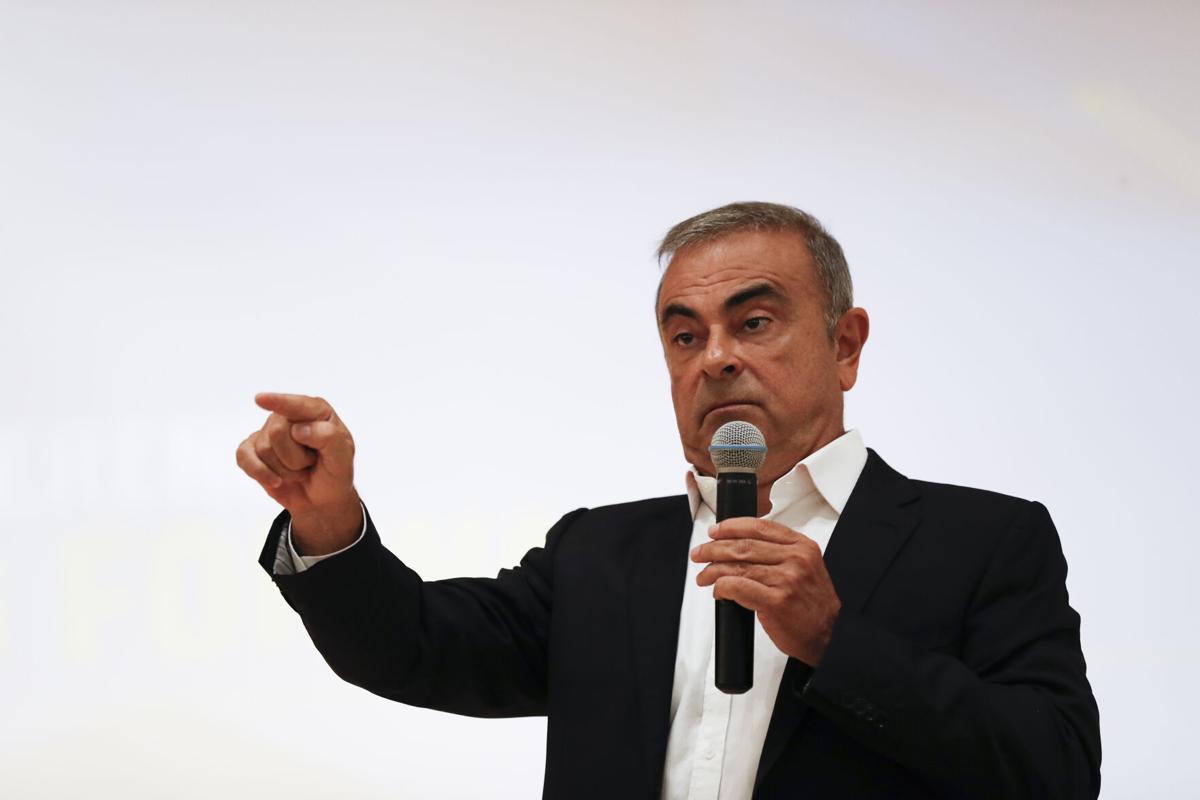 BEIRUT — Former Nissan Motor Co. Chairman Carlos Ghosn made a new public appearance in Lebanon Tuesday during which he launched an initiative with a local university to help the country that is undergoing a severe economic and financial crisis.

It is Ghosn’s second appearance in public since he was smuggled from Japan in late December to his ancestral Lebanon. In early January, Ghosn gave a news conference in Beirut saying he fled because he could not expect a fair trial, was subjected to unfair conditions in detention and was barred from meeting his wife under his bail conditions.

Ghosn declined to elaborate about the details of his arrival in Lebanon, saying it happened in “dramatic circumstances” and also refused to answer questions regarding two Americans who allegedly helped him flee Japan to Lebanon through Turkey. He also refused to talk about former Nissan executive Greg Kelly who is standing trial in Japan.

Ghosn said that the initiative with the Maronite Christian Holy Spirit University of Kaslik, USEK, titled Moving Forward, aims to launch a top executive management program, a training center on new technologies and to support startups.

“The objective is obviously serving this institution … but also serving the country and the society,” Ghosn said in an opening speech. “If there is one specific thing that Lebanon needs it is create jobs.”

Lebanon is mired in the country’s worst economic and financial crisis in its modern history. It defaulted on paying back its debt for the first time ever in March, and the local currency has collapsed, leading to hyperinflation and soaring poverty and unemployment. Talks with the International Monetary Fund on a bailout package have stalled.

The economic and political crisis deepened after an Aug. 4, blast in Beirut that killed and wounded many and caused damage worth billions of dollars.

Many Lebanese consider Ghosn as one of the country’s heroes in the diaspora who succeeded in turning troubled car companies in France and Japan into profit making ventures. Some have suggested that Ghosn should be given a governmental post in Lebanon to get the country that is notorious for corruption and mismanagement out of its troubles.

Ghosn said Lebanese should be up to the responsibility and do whatever they can to solve problems in the country that the state is not doing anything to tackle. “I am ready with all my powers to help these young people,” Ghosn said, about students at USEK.

Since arriving in Lebanon, Ghosn gave interviews during which he repeatedly said he is innocent of allegations he under-reported his future income and committed a breach of trust by diverting Nissan money for his personal gain.

He said one of the reasons why there is no new foreign investment in Lebanon is because of the “lack of trust. If you bring back trust, money will come. It’s not a problem.” Ghosn was responding to a question about capital controls imposed by local lenders after the crisis began late last year and how to attract investments.

“We are here to help them, make sure that they are solid enough that they are ready for the bad surprises, for the unfair competition, for the malpractices for the heavy administration and still wanting to continue,” Ghosn said.

Ghosn also declined to answer a question on whether he would invite to speak at USEK former Nissan executive Greg Kelly, whose trial in Japan began earlier this month over his alleged role in failing to report to Japanese authorities the future compensation of Ghosn, if he is released in the future. Kelly had said he committed no crimes and was only trying to keep his star boss Ghosn from leaving.

In January, Lebanon received the Interpol-issued wanted notice, which is a non-binding request to law enforcement agencies worldwide that they locate and provisionally arrest a fugitive.

Lebanese authorities say Ghosn entered Lebanon on a valid passport, casting doubt on the possibility they would hand him over to Japan.

Ghosn was arrested in November 2018 and was expected to face trial in April 2020. He posted 1.5 billion yen ($14 million) bail on two separate instances after he was arrested a second time on additional charges, and released again.