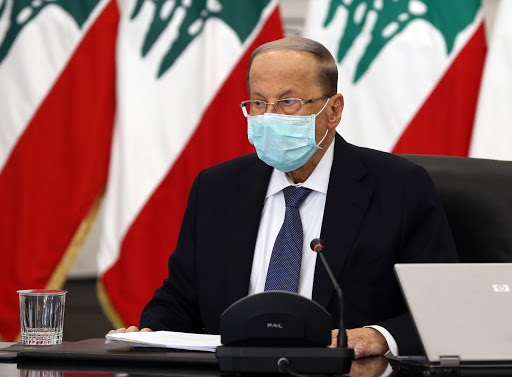 Despite all the catastrophes that took place in Lebanon during his reign Lebanon president Michel Aoun vowed to remain a “bulwark” in the face of “anyone trying to undermine the content” of his presidential oath of office.

“I have made an oath, and I will abide by it until the last day of my tenure. I will remain a firm bulwark in the face of anyone trying to undermine its content,” the president added.

Aoun who declared last week that if a government is not formed by Caretaker PM Mustafa Adib , Lebanon will be going to hell

Yesterday Adib quit because he could not form a cabinet after Aoun’s ally the heavily armed Iranian backed Hezbollah and its ally the Amal movement who make up the so called Shiite due sabotaged the formation of the cabinet.

Lebanon witnessed several catastrophes during Aoun’s reign here are some:

Lebanon defaulted for the first time ever on its debt

The Lebanese pound collapsed .Lost 80 % of its value

The Lebanese depositors can no longer access their bank accounts

Lebanon witnessed the most devastating explosion ever at only port in Beirut when 2755 tons of Ammonium Nitrate that were confiscated and stored since 2013 exploded killing over 190 , injuring thousands more , destroying a huge section of Beirut and displacing 300,000 .

Ali Hussein an analyst told Ya Libnan following Aoun’s announcement today : “Aoun will be always remembered as the president who sent the country to hell and I am really shocked he intends to stay till the end of his term”