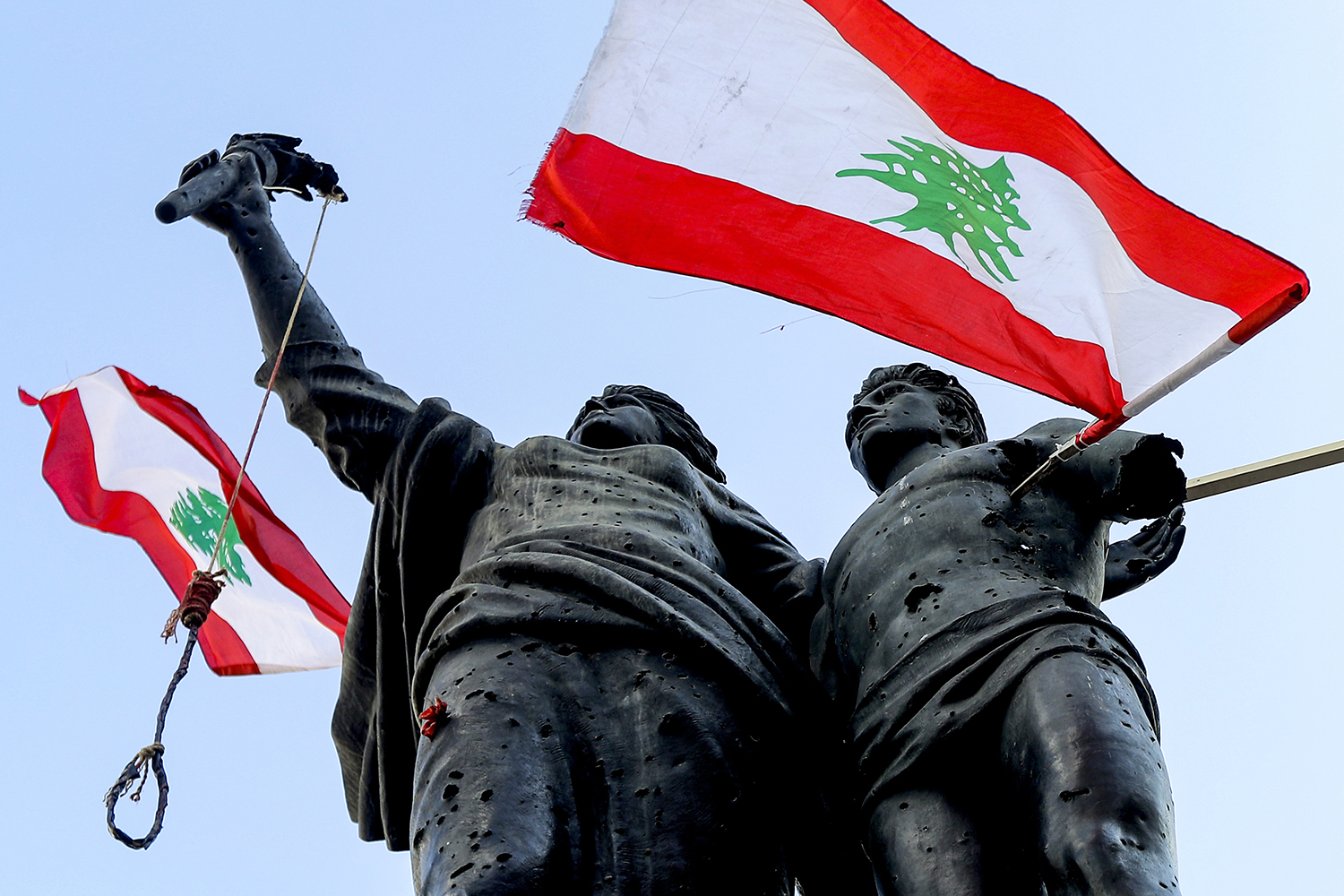 A noose and gallows hang from the monument at Martyrs’ Square in Beirut on Aug. 9. Lebanon’s political elite faced pressure from all sides after a deadly explosion was blamed on official negligence. JOSEPH EID/AFP VIA GETTY IMAGES
Share:

If we go back to the comparison of Lebanon with Switzerland, maybe we took it too superficially and could be inspired by that country’s political system, which is a federal arrangement. The Swiss model is a well-balanced mechanism that caters for the country’s many different aspects. Could we build this Swiss system in Lebanon? Could we accept that we are in a crisis and need to move on to something new?

Nostalgia is a drug and a poison. It is where we go when we have nothing more to hope for in the future or any inspiration left to create. The past is an artificial refuge, but it has once again become the refuge of the Lebanese. I say once again because, after the civil war started, we would repeatedly hear the same story from emigrants and broken Lebanese: “Lebanon was the Switzerland of the Middle East; a financial center, a cultural center.” And this eulogy would always end with the key description that I never could bear to hear: “You could ski in the morning and enjoy the beach in the afternoon.” Today, once again, I keep hearing people repeat these phrases — even people who would not have known Lebanon in its heyday, but are just living in the nostalgia of days described to them.
This new nostalgia we are witnessing is quite worrying, as it is an abandonment of everything. However, we can learn from other experiences in the history of nations. If we go back to the comparison with Switzerland, maybe we took it too superficially and could be inspired by that country’s political system, which is a federal arrangement.
Switzerland has not always been a nation state. Previously, it was a loose alliance of autonomous cantons that came under a federal constitution in 1848. Like in Lebanon, no party dominates and, more importantly, each canton has its own constitution, parliament, government, and courts. The Swiss model is a well-balanced mechanism that caters for the country’s many different aspects. It has four official languages and large geographical differences, but they coexist. Federalism was key to the transformation of Switzerland, as well as its neutrality among Europe’s big countries, such as France and Germany. On a security level, each canton has its own police force, while the federal police organization focuses on federal competences.
The nation state of Lebanon has never been a viable solution in its current structure. And so I believe that we need to allow people to build their own fences, but as part of the same sovereignty: A highly decentralized system might be the only solution for Lebanon. Let each community have its own security, protection and electoral targets. Switzerland, like Lebanon, is a small country yet it has a political and legal structure that allows its various parts to live together.
Could we build this in Lebanon? Could we accept that we are in a crisis and need to move on to something new? Voices claiming that the only problem is confessionalism and that abolishing this will solve everything are making a mistake. Abolishing confessionalism would also condemn minorities, create the roots for another problem or build a ruthless dictatorship.
I tend to refuse the narrative that says we are all the same and there is no difference between us. Quite the opposite should be said. There are differences and we can recognize these differences while still living together under the rule of law. All Christian minorities need to feel represented. The Druze need to feel represented. Shiites need to feel represented. Sunnis need to feel represented. Every community needs to feel represented and protected by the nation. Today, Lebanon is ruled by the ruthless and the thugs. It cannot go on for much longer.
In an ideal world, we would say: “Let us cancel sectarianism and solve everything.” But we are still attached to “blood and soil.” Imagine abolishing all confessionalism in Lebanese politics and focusing on the hiring and nomination of people with power. Once tensions rise because there are more nominations from one group than another, then what? Until today, in Lebanon, religious alliances only lasted when there was one oppressor. The alliance between Hezbollah and the Free Patriotic Movement (FPM) is working because Hezbollah has the real power and the FPM is obeying. On the other side, the Future Movement, the Lebanese Forces and the Progressive Socialist Party have been unable to do the same with their allies and have ended up being torn apart.

In the private sector, I have personally never looked at religion, race or gender, just if someone has common work values and is dedicated. The same should apply to government, which should be based on competence and meritocracy, not people’s blood line. Currently, in Lebanon, it is not even about being from the same minority, but being from the same family. The circle has gotten ever smaller; hence the protesters from across the minorities were screaming, “All means all.” I even wonder if the Shiite community really considers itself to be protected and respected thanks to Hezbollah. Would a true nation not give them the same, but without having to show allegiance to anyone? It would be their right to live with their head up high and not thanks to a warlord or a clan leader. Don’t we all have this same wish?
The risks of dissolution exist, but not only in Lebanon. Europe was built by tribes and even today we see demands for secession: Corsica from France, Catalonia from Spain, and Scotland from the UK. So why are we surprised if it is the case in Lebanon or even Syria?
Those who oppose a drastic constitutional change in Lebanon today are the same people who condemn Sykes-Picot and warn of a conspiracy theory of a new similar agreement every other season. Yet they are comfortable with the division it created. It is the same narrative that Syria and Iran have embraced.

It allows them to oppose international interference in statements only and insist that they protect minorities in the face of many Arabs. In fact, they crush minorities under their authoritarianism. It is quite deranging the damage these countries have done to our region. Their communist-religious vision has promoted sectarianism to hide their nepotism and corruption in every country they rule. It is also quite disturbing to see European countries accept these views.
There are things Lebanon can learn from Switzerland and Europe, but one main difference that we will always stumble on is that there is only one Swiss Armed Forces. So, regardless of our wish to be inspired by Switzerland, this would mean transforming the country and writing a new constitution. And with the position Hezbollah holds and its control over the country, this seems like a sterile discussion.
The latest events surrounding the government formation attempts seem to indicate that France will act with pragmatism and push for a solution that encompasses and even delivers on Hezbollah and Iran’s demands. With Saad Hariri’s continuous concessions, it seems that Hezbollah has enough submissive actors across the political spectrum to ensure its full control. In this sense, Lebanon might become more like Syria or Iran before it becomes a model of coexistence.