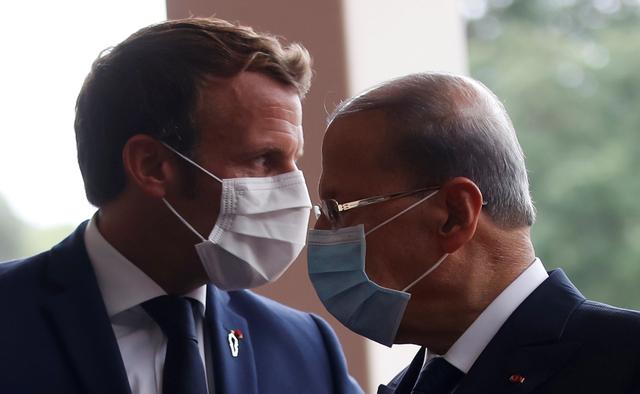 Lebanon’s Christian president, Michel Aoun, told fractious political leaders on Monday the country was heading “to hell” if a new cabinet was not formed swiftly to dig the nation out of its worst crisis since the 1975-1990 civil war.

But the nation’s sectarian politicians remain deadlocked over how to pick ministers to draw up economic reforms.

Politicians had told President Emmanuel Macron during his visit after a huge August explosion in Beirut that they would form a cabinet of experts in 15 days, accelerating a process that usually takes months. That deadline passed last week.

Nerves in the nation were further rattled on Tuesday after a blast rocked southern Lebanon. A security source said it occurred at an arms depot of Hezbollah, a heavily armed and politically powerful Shi’ite Muslim group.

Political talks have hit a logjam over a demand by Hezbollah and its ally, Lebanon’s other main Shi’ite group, the Amal Movement, that they name several ministers including the finance minister.

The source said Paris was reluctant to set a new deadline and was instead giving politicians more time provided they worked towards a French demand for a cabinet of ministers with expertise to deliver reforms.

“France is letting them move forward, but within a reasonable timeframe,” the French source told Reuters.

France has said it was ready to host an international conference in the second half of October to secure aid from donors, who demand reforms before giving cash. Paris has drawn up a roadmap for a new government to tackle corruption and rebuild the economy.

But there has been no indication that Prime Minister-designate Mustapha Adib, a Sunni under Lebanon’s sectarian system of power sharing, is any closer to naming a cabinet.

A senior Shi’ite political source said the two main Shi’ite groups insisted on choosing the finance minister or they would not take part in a government, a move that would likely mean any government policies would be blocked once sent to parliament.

“Everyone is waiting,” said another source familiar with the cabinet process. “I don’t think the French initiative is dead.”

The Shiite stonewalling appears to be embarrassing President Aoun, who has been an unwavering political ally of Hezbollah since 2006.

If a cabinet is not formed, “we are heading for hell”, he said on Monday. Aoun proposed abolishing the distribution of so-called “Regalian” portfolios to specific communities in order to resolve the crisis.

On Saturday, the Free Patriotic Movement (FPM), founded by Aoun and led by his son-in-law Gebran Bassil, issued a statement condemning the principle that “a party may impose its countersignature on the Lebanese in a manner contrary to the Constitution and to prevailing customs”. The communiqué was an implicit jab at the two Shiite parties.

The statement sparked rumours that Aoun, whom his detractors call “a Christian endorsement of Hezbollah”, could be turning his back on his alliance with the pro-Iranian movement. He denied these reports during his press conference on Monday.

While assuring that the 2006 agreement with the Shiite

party was still in force, and that “alliances do not prevent disagreements”, he nevertheless put the ball in his ally’s court, specifying that the solution was to be sought on their side.  “When there is disagreement, everyone defers to their own convictions, and mine are based on the Constitution,” he said.

“This is not the first time that there have been disagreements between Hezbollah and the CPL, but it is true that the impasse over the finance portfolio further isolates the Shiite team,” Joseph Daher, an academic and author of the book “Hezbollah, Neoliberalism and Political Economy”, told FRANCE 24.

He added: “Although President Aoun’s party seems to be distancing itself from its Shiite ally lately, it is too early to speak of a questioning of their alliance, because neither side has an interest in a split in which they would both lose out”.

Lebanese media reported that the sanctions imposed by the US administration on September 8 on two former ministers from parties allied to Hezbollah, considered a “terrorist” organisation by Washington, provoked shockwaves within the Lebanese political class.

By deliberately targeting Ali Hassan Khalil, one of the pillars of the Shiite Amal movement, and Youssef Fenianos, a Christian leader of the Marada (pro-Syrian) party, Washington is implying that no one is immune to its strategy to weaken and isolate Hezbollah.

“The isolation of the Shiite leadership comes at the wrong time, during a period in which the United States is being intractable with everything that has to do with Iran and its allies,” Daher said.

Paradoxically, it was this policy of sanctions, which came just as France offered a breath of fresh air to Hassan Nasrallah’s party through public dialogue, that pushed the Shiite team to be less conciliatory during the negotiations to form a government.