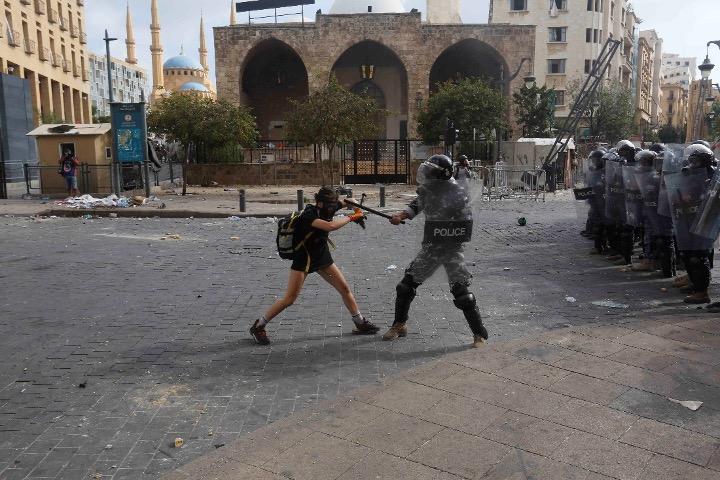 Accountability still needed for excessive force during August protests. The ISF is blaming the Parliament Security Force, comprising Parliament Police and an army company who fall under the command of Speaker Nabih Berri for the use of excessive force against the protesters

The Lebanese Internal Security Forces (ISF), in a letter to Human Rights Watch, has denied their members used live ammunition, rubber bullets, or metal pellets during the August 8 protest in downtown Beirut. Instead, the ISF pointed to the Parliament Security Force, comprising Parliament Police and an army company, as having used these weapons. The ISF also identified men in civilian clothing seen in photos and videos circulating on social media shooting or aiming to shoot at protesters as “civilian employees of the Parliament Police.”

Human Rights Watch documented the Lebanese security forces’ use of excessive, and at times lethal, force against mostly peaceful protesters in Beirut demanding accountability for August’s blast. More than 700 people were injured during the protest, with most serious injuries caused by security forces firing metal pellets into the crowd. The ISF, Lebanese Armed Forces (LAF), and Parliament Police were all deployed at the protest.

The ISF said that they did not open investigations into the conduct of their members, as they said none used excessive or unlawful force and adhered strictly to the orders they were given. However, Human Rights Watch documented members of the police using excessive amounts of tear gas and firing it directly at protesters, as well as beating protesters.

The army has not yet responded to a Human Rights Watch request for comment about its members’ conduct on August 8. Although the army has publicly denied its members fired live ammunition toward protesters on August 8, Human Rights Watch verified evidence showing two soldiers from the Airborne Regiment doing just that. The army should also investigate and comment on the ISF’s allegations that the army company included in the Parliament Security Force fired rubber bullets and metal pellets at protesters.

Parliament Police declined to provide comment. When Human Rights Watch attempted to summarize its findings to an official during an August 19 phone call, he hung up. The Parliament Police which is under the authority of Speaker Nabih Berri has been responsible for serious abuses against protesters since Lebanon’s October 17 uprising. But despite a wealth of publicly available information about the force’s command structure and operations, it refuses to speak with human rights and media organizations.

Impunity for security force abuse cannot be allowed to continue. Lebanon’s Public Prosecutor should urgently open an investigation into the events that took place on August 8 and make the results public. International donors to Lebanon’s security forces, meanwhile, should investigate whether their support is going to abusive units, and if so, halt that support immediately.