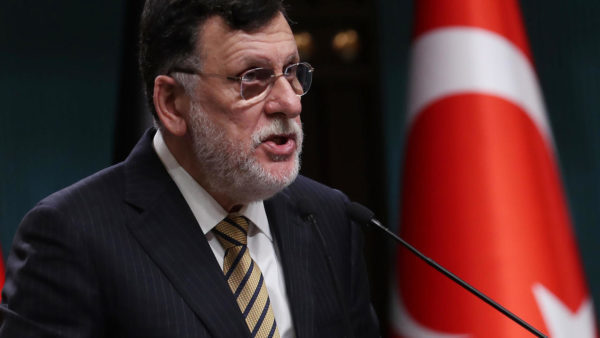 Libyan leader Fayez al-Sarraj has said he plans to step down before the end of October. © Adem Altan, AFP
Share:

Almost five years after he was appointed head of the Tripoli-based GNA, Fayez al-Sarraj threw in the towel on Wednesday. The Libyanprime minister said in a short televised address that he plans to leave office before the end of October to make way for a replacement.

This announcement came as a great surprise, even though it was unsurprising. “This decision was expected and only confirms the rumour that he would go, which had been circulating in Tripoli for several days,” said Cyril Payen, FRANCE 24’s International Affairs Editor.

“This could be a manoeuvre aimed at putting pressure on the international community, especially the United States and its allies, so that these countries get more involved in resolving Libya’s civil war,” added Walid Phares, a US-based Middle East specialist, talking to FRANCE 24.

Libya has been in chaos since dictator Muammar Gaddafi was overthrown in 2011. Over the past year, the GNA has gained the upper hand over military strongman Khalifa Haftar’s Libyan National Army – with Turkish military and technological support crucial in turning the tide, especially through the supply of drones.

Another possible explanation for Sarrej’s resignation, Phares said, is that it was a matter of him bowing to pressure from recent wave of protests over deteriorating living conditions in Libya: “He’s facing a lot of pressure from both demonstrators and members of his own camp, notably Interior Minister Fathi Bashagha, who does not hide his own ambitions.”

From Misrata, the strategically located city whose militias played a crucial role in the defence of Tripoli, Bashagha has often been described as Ankara’s man in Libya. Tellingly, he was greeted by some 300 militiaman in a show of force at Tripoli airport when he returned from a trip to Turkey in late August.

“Sarrej found himself in a very difficult position,” Phares said. “He was weakened in his own zone of influence in western Libya by the government’s internal divisions, as well as tensions between the militias and jihadis Turkey sent over from Syria – not to mention tensions between the various militias themselves.”

Phares also raised the possibility that Turkey or local militias directly pressured Sarrej to stand down. Sarrej said in his resignation speech that he had sought to achieve “as much consensus as possible” within an “extremely polarised” political and social climate but that the “difficulties were insurmountable”. Even today, some groups “insist on seeking their ends through military means”, he lamented.

Sarrej’s resignation risks further complicating the Libyan crisis, as the political tussle for control of the country has heated up since the GNA repulsed Haftar’s offensive on Tripoli in June.

Sarrej and Haftar met for diplomatic talks in Switzerland and Morocco earlier in September – but any political turbulence provoked by Sarrej’s resignation risks disrupting this spirit of dialogue between Libya’s two rival governments.

This article was translated from the original in French.