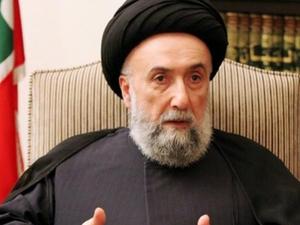 For the second time, a hearing session kicked off at Mount Lebanon’s Justice Palace to question anti-Hezbollah Shiite cleric Ali al-Amin over accusations of “meeting Israeli officials” during a conference in Bahrain, a charge he completely denied

Last June, a lawsuit was filed by the public prosecutor’s office in Mount Lebanon against al-Amin accusing him of “meeting Israeli officials” and a host of other charges during a conference he attended last year.

The accusations also include “attacks on the so called Resistance and its martyrs, inciting strife between sects, sowing discord and sedition, and violating the Sharia laws of the Shiite Jaafari sect.”

Besides Israel, the 2019 dialogue conference among religions in Bahrain was attended by religious clerics from different countries including Kuwait, Lebanon, Egypt and Jordan.

Former PM Saad Hariri blast the move by the Hezbollah backed judiciary as “a blatant attack on the dignity of the Lebanese.”

“Treason campaigns against me by Hezbollah are not something new and are due to my rejection of the Iranian project they carry to Lebanon and the region,” said al-Amin during a press conference last December.

Hezbollah denounced the participation of Amin in the religious forum in Bahrain and accused him of “normalizing” ties with Israel.

He accused the party and the “mother Shiite institution” in Lebanon of launching “treason campaigns and fabrications.”

On his participation in the Bahrain forum that allowed the participation of Israel, he said: “I took part in the forum without knowing the participants’ names,” noting it was also attended by Lebanon’s ambassador to Bahrain.

“I will remain opposed to Hezbollah’s policy of oppression and domination. The Shiite duo’s policy only brings harm upon the Shiite community,” he said.

The former Mufti of the City of Tyre is an outspoken critic of Hezbollah and its allegiance to the Iranian leadership and the so called Wilayat al Faqih.

Back in June 2009 he responded to a statement by Hezbollah’s ally the founder of FPM and current president of Lebanon by explaining what allegiance to Wilayat al Faqih means to us in Lebanon .