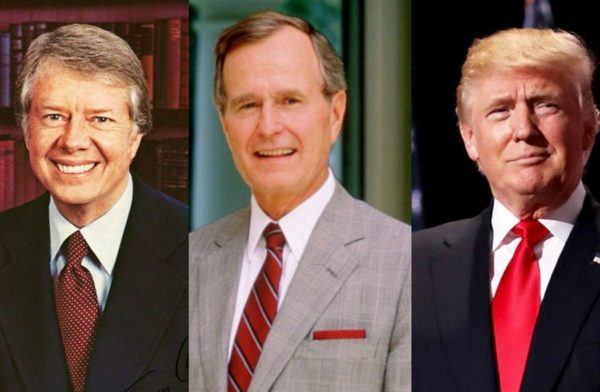 President Trump (R) received comparisons to one-term presidents George H.W. Bush (C) and Jimmy Carter (L) when his rating dipped below 40% in July in a Gallup poll. Trump’s job approval rating has held steady around 40% after the Democratic and Republican National Conventions.
Share:

President Donald Trump’s job approval rating has held steady around 40% after the Democratic and Republican National Conventions, according to a new Gallup poll.

And that could be a bad sign for Trump’s reelection prospects, if history is any indication.

Trump’s rating stayed at 42% in a Gallup poll conducted Aug. 31-Sept. 13, which is the same approval he had in an earlier poll in August. In July, his approval rating was the lowest in all of 2020, at 38%, after falling from his personal high of 49% in May. The poll has a margin of error of four percentage points.

Trump received comparisons to one-term presidents George H.W. Bush and Jimmy Carter when his rating dipped below 40% in July in a Gallup poll.

Historically, incumbent presidents who went on to be reelected reached at least 50% approval at this point. At 42% in September of his election year, Trump’s approval is behind that of Barack Obama, who had a 49% approval during the same time period in 2012 as he faced off against Mitt Romney.

Trump has continued to see low approval ratings in how he’s handling the coronavirus pandemic. Sixty-seven percent of Americans surveyed from July 8 to 9 in an ABC News/Ipsos poll disapproved of Trump’s handling of the virus, McClatchy News reported.

The RNC and DNC had particularly low viewership this year, meaning Trump likely didn’t get a bump after the conventions. Forty-six percent reported watching the DNC and 40% watched the RNC, according to Gallup, which found 64% of Americans said they tuned in for the RNC in 2016.

An ABC News/Ipsos poll — conducted in September with a 4.7 percent margin of error —showed 65% of those surveyed still disapprove of Trump’s handling of the pandemic. Sixty-eight percent of Americans don’t trust what Trump says about the virus and 67% said he acted too slowly.