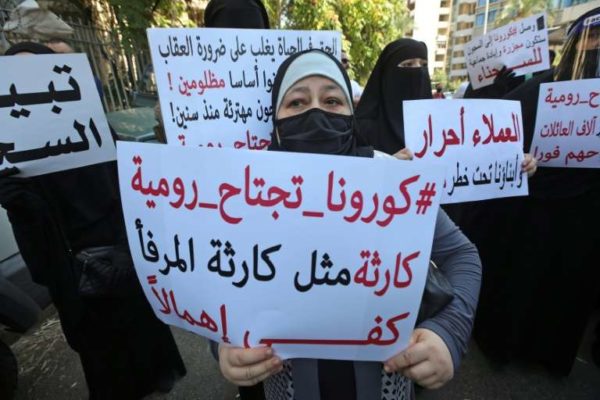 ANWAR AMRO The families of detainees in Lebanon’s Roumieh prison staged a protest in front of a Beirut courthouse Monday, demanding a general amnesty for their relatives over fears Covid-19 was spreading inside
Share:

The head of the Beirut Bar Association Monday warned a novel coronavirus outbreak in crisis-hit Lebanon’s largest and most overcrowded prison amounted to a “humanitarian time bomb”.

Security authorities on Saturday announced 22 coronavirus cases at the Roumieh prison, just outside Beirut, including 13 detainees and nine guards. They said the prisoners had been transferred to an isolation unit inside the jail.

The prison houses more than 4,000 prisoners, around three times its intended capacity, and has long been infamous for the poor conditions in some of its blocks.

Footage allegedly smuggled out of the prison and shared widely on social media shows several men lying on thin mattresses just feet apart from each other along a narrow corridor.

In an adjacent room, at least seven detainees lie on similar mattresses side by side on the floor.

Khalaf called on the Lebanese government to take more “urgent measures” to stem the spread of the virus.

These should include “separating out those prisoners showing symptoms from the others” and relying on non-government organisations willing to carry out regular Covid-19 tests, he said.

He added that the advent of Covid-19 cases inside Roumieh should be reason to “improve food and water quality” in Lebanese prisons, “where no regard is given to the value or dignity of human beings”.

Khalaf said measures must be taken to address overcrowding, calling on the judiciary to order “some releases, except in cases of egregious crimes and terrorism”.

He urged outgoing justice minister Marie-Claude Najm to call on the president to issue an amnesty in special cases, such as for those who are sick, “to quickly decrease the overcrowding”.

Dozens of families of Roumieh detainees staged a protest in front of a Beirut courthouse Monday, demanding a general amnesty for their relatives over fears the pandemic was spreading inside.

Caretaker health minister Hamad Hassan on Saturday said his ministry was working with the ministries of interior and defence to prepare two hospitals in the eastern Bekaa region and one in the capital for detainees and prisoners.

The number of Covid-19 infections has spiked in Lebanon in recent weeks, especially after a massive explosion at the Beirut port on August 4 that killed more than 190 people, wounded thousands and ravaged large parts of the capital.

The country is already mired in its worst economic crisis in decades, and many fear its fragile health system could not cope with a huge increase of coronavirus cases.