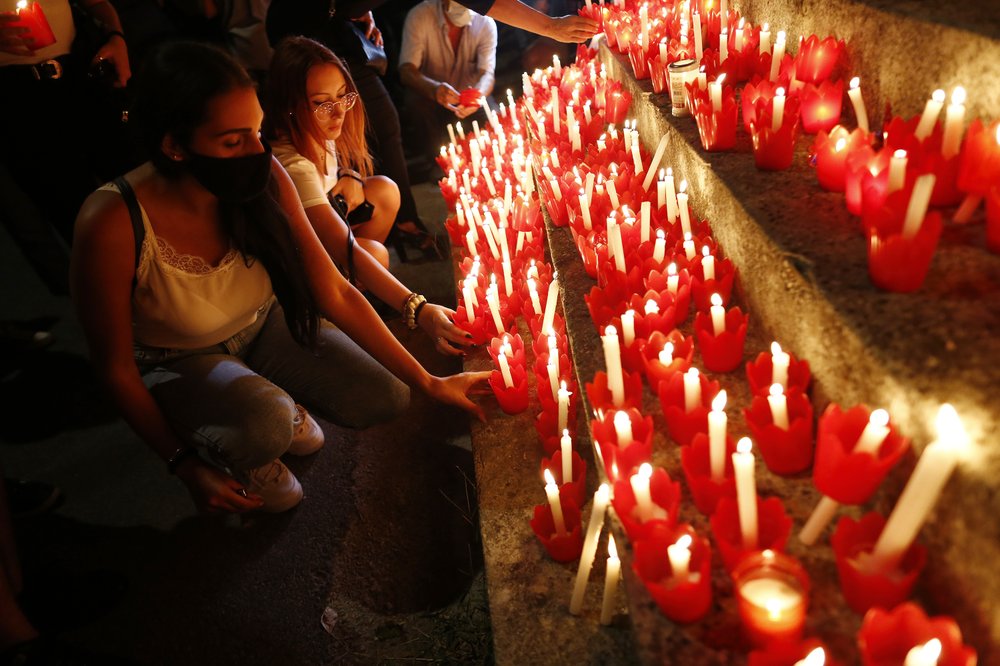 People light candles during a torch light procession in memory of Willy Monteiro Duarte, in Paliano, Italy, Wednesday, Sept. 9, 2020. Hundreds of people have walked in a funeral procession honoring a young Black man whose brutal beating death during a fight has convulsed Italy and drawn condemnation
Share:

ROME (AP) — Hundreds of people in Italy joined a funeral procession Saturday for a young Black man whose brutal beating death has shaken the country and drawn condemnation from the highest levels of the government.

Premier Giuseppe Conte and Italy’s interior minister attended the funeral of 21-year-old Willy Monteiro Duarte, who was killed during a fight in Colleferro, a city on the outskirts of Rome, early Sept. 6.

Four Italians have been arrested, including two brothers with police records and a martial arts background, but to date prosecutors haven’t indicated if the slaying was racially motivated

Italian news reports have quoted witnesses as saying Monteiro Duarte, who was born in Rome to parents from the African island nation of Cape Verde, intervened while seeing a friend get beaten up in the fight and was then fatally beaten himself.

The slaying has struck a chord in a country that in recent months has shown a remarkable sense of common purpose in its bid to curb Italy’s coronavirus outbreak. Carlo Verdelli, writing in Saturday’s Corriere della Sera newspaper, said the beating was evidence of another Italy, an uglier one where indifference, hatred and anger are on the rise.

“Today’s funeral for Willy is the funeral of a nation that doesn’t know how to educate or protect its sons,” Verdelli wrote.

While noting that a racial element hasn’t been established, Verdelli said the slaying was evidence of a “hatred for those who are different, who come from the outside, who are fat, weak, female or handicapped, or who try to oppose the law of the survival of the fittest.”

The funeral procession featured hundreds of people, most wearing white shirts and face masks, walking toward the sports stadium where Monteiro Duarte was being honored and then clapping in respect as his casket was carried out. It was a strong show of solidarity for the young man, an apprentice cook who has been described as hard-working and upstanding by those who knew him.

Photos of his smiling face have been plastered on Italian newspapers for days, alongside images of the suspects, including ones showing the tattooed brothers shirtless in boxing poses.

The slaying appears to have affected Conte on a visceral level: He phoned the family afterward to express his condolences and has demanded justice. Conte has also said that the slaying was not an isolated event and must not be minimized.

“We must look ourselves in the eye and become fully aware that there are some pockets of society and fringes of the population that cultivate the mythology of violence and oppression,” Conte told the crowd after the funeral Saturday.

In a separate Facebook post, he asked what it means that someone could be killed in Italy for having tried to help a friend.

“Will we tell our children to look away? To not intervene to quell disputes or to try to protect weaker friends or friends in obvious difficulty?” Conte asked. “I don’t think this can be the answer or the way forward. Rather, we must multiply our efforts in every location and context, so that our children grow up with the culture of respect for everyone.”