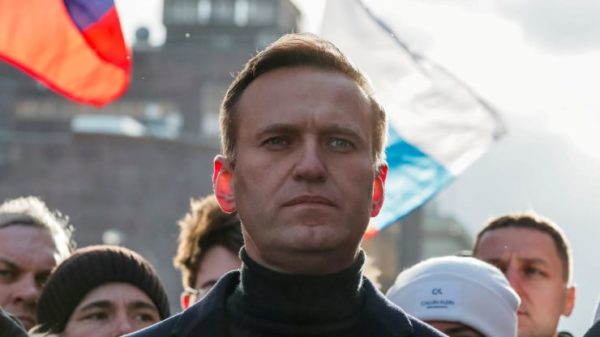 President Donald Trump has refused to condemn Russia over the poisoning of opposition figure Alexei Navalny, saying he has not seen proof.

He said the case was “tragic” but urged reporters to focus instead on China, which he said was a bigger threat to the world than Russia.

Nato and Germany say there is “proof beyond doubt” that Mr Navalny was attacked with a Novichok nerve agent.

His team says he was poisoned on the Kremlin’s orders. Russia denies this.

On Saturday, the Russian foreign ministry suggested that if a Novichok-type nerve agent had indeed been used, it did not necessarily originate in Russia.

Mr Navalny – an anti-corruption campaigner who has long been the most prominent face of opposition to President Vladimir Putin in Russia – is in a coma in a Berlin hospital having been airlifted there from Siberia, where he fell ill.

What did Trump say?

Speaking at a press event on Friday, he said he had yet to see evidence of poisoning in the case.

“So I don’t know exactly what happened. I think it’s tragic, it’s terrible, it shouldn’t happen. We haven’t had any proof yet but I will take a look,” he said.

“It is interesting that everybody’s always mentioning Russia and I don’t mind you mentioning Russia but I think probably China at this point is a nation that you should be talking about much more so,” he said.

What is Nato’s position?

Tests at a military laboratory in Germany show “beyond doubt” the presence of a Novichok nerve agent, the German government and Nato say.

Mr Stoltenberg said it required an international response, but gave no further details.

The US National Security Council has pledged to “work with allies and the international community to hold those in Russia accountable”.

What did Russia say about nerve agents?

The brief statement released by the foreign ministry on Saturday noted “multiple hostile statements made against Russia” over Mr Navalny’s illness.

But experts in Western states and Nato had, it said, for years worked on compounds used to make Novichok nerve agents.

“For example, in the USA, over 150 patents were officially issued to developers of technologies for their combat use,” the foreign ministry said.

Under the 1992 Chemical Weapons Convention, Russia and the US committed themselves to eliminating all of their nerve agents and other chemical weapons. The US is expected to destroy its final stockpile by the end of 2023 while Russia officially completed the process in 2017

However, Western diplomats and intelligence officials allege that the Salisbury attack in 2018 exposed systematic attempts by Russia to cheat on the convention as well as deceive the international community.

The Kremlin has repeatedly denied any involvement in Mr Navalny’s case.

Foreign Minister Sergei Lavrov said Germany had not yet shared any findings with Moscow prosecutors and said Russia had “nothing to hide”.

Meanwhile a toxicologist in Omsk – where Mr Navalny was initially treated after the plane he was flying on made an emergency landing – insisted no poison had been found by doctors who examined him there.

“Any external factors could have triggered a sudden deterioration. Even a simple lack of breakfast,” said Alexander Sabayev, chief toxicologist for the Omsk region.

What happened to Navalny?

He fell ill last month while on a flight from Siberia to Moscow.

The plane made an emergency landing in Omsk and Russian officials were persuaded to allow him to be airlifted to Germany two days later.

A nerve agent from the Novichok group identified by Germany in the Navalny case was also used to poison ex-spy Sergei Skripal and his daughter in Salisbury. They both survived but a local woman, Dawn Sturgess, died after coming into contact with the poison.

Britain accused Russia’s military intelligence of carrying out that attack in Salisbury. As part of a co-ordinated response, 20 countries expelled more than 100 Russian diplomats and spies. Russia denied any involvement.