Lebanon to mark dismal centenary amid fears for survival 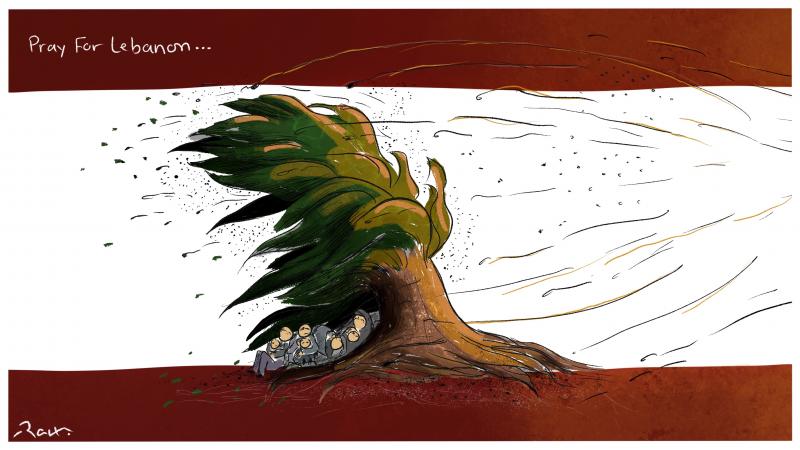 A cartoon of Lebanon following the explosions of Beirut Port – by Rafat Alkhateeb
Share:

Mourning the Beirut blast disaster, ruined by economic meltdown and hostage to a dysfunctional political system, Lebanon marks its centenary Tuesday unsure whether it will survive as a state.

There will be no ceremony to commemorate 100 years since French mandate authorities on September 1, 1920 proclaimed the creation of Greater Lebanon incorporating mainly Muslim former Ottoman regions.

Instead, French President Emmanuel Macron will return to the same iconic Ottoman-era building where it was declared to meet representatives of a political class desperately clinging on to its privileges to convince them to accept essential reforms to save the country.

“This is the greatest crisis Lebanon has ever witnessed,” said 87-year-old Rose Ghulam, whose home was destroyed by the massive August 4 explosion at Beirut’s port.

“Our leaders have no conscience. They’re not honest. How can they possibly rebuild our homes? They all need to be replaced,” said the former school teacher, who was born under French mandate.

The massive explosion of a huge stockpile of ammonium nitrate at the port killed at least 188 people, wounded thousands and sowed destruction across large parts of the capital.

For many Lebanese who have taken to the streets since October 2019 to protest what they view as the corruption and incompetence of the political class, it was a point of no return.

Political leaders, who were aware the fertiliser was being stored at the port, have refused to claim responsibility and have instead been seen to be passing the buck.

Lebanon’s civil society says the blast is just the latest in a long line of official failings.

The protest movement accuses the political class of having failed, in the three decades since the civil war, to build a functioning state and implement the rule of law.

“Today the political system is at the end of its tether,” said Lebanese academic Karim El Mufti.

Though Lebanon flourished in the 1960s, its history has largely been a succession of political crises punctuated by rounds of violence.

Now its worst economic crisis in decades has doubled poverty to more than half the population in just several months, and is chipping away at the middle class.

Although he dismissed the likelihood of civil war, Mufti said he expected the country to “disintegrate”.

“Everybody says that we can’t continue like this, even political actors, but they are trapped. This system acts like a mouse trap.”

One of the key culprits, he said, was Lebanon’s deep-rooted political sectarianism, under which the top state and government posts are divided up between its myriad religious sects.

This system, inherited from the Ottoman era, was supposed to be scrapped under the 1989 Taef Accord that ended the civil war, but never was.

Instead it has been pushed to extremes, leading to political deadlock and rendering impossible even the naming of lower-ranking bureaucrats without the accord of politicians from all religious communities.

Deeply fragmented, Lebanon has long been a proxy battleground, most recently being caught in a tug-of-war between the United States and Iran.

Lebanese historian Dima de Clerck said that throughout Lebanon’s history “foreign interference has always existed, and we have a culture of heightened cronyism”.

“We are not a unified people, we always need a foreign sponsor to fight the internal enemy.”

As an example, she pointed to “the absence of a national collective memory to the benefit of those memories upheld by the different sectarian groups”.

This explains why, until now, “we don’t have unified history books” in schools, she said, and Lebanese children are educated through the lens of their community instead.

But for many, the multi-confessional street movement since last October has given birth to a national sentiment that transcends political or religious affiliations.

“But no one holds the keys to this — not the political parties, not the various opposition movements, nor the international community,” he said.

Emilie Sueur, co-editor-in-chief of Lebanese newspaper L’Orient-Le Jour, warned that action is needed before it was too late.

“It is just several minutes to midnight on the clock of the end of Lebanon. But it is not midnight yet.”