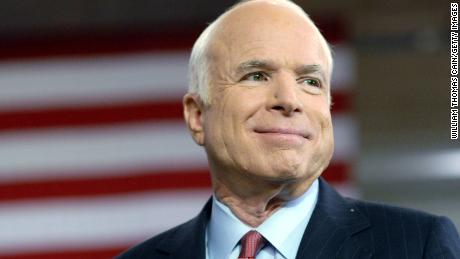 A Republican anti-Trump group has invoked the late Senator John McCain in a new attack advert as more than 100 of the former GOP presidential candidate’s aides endorsed Democratic nominee Joe Biden in the 2020 race.

Republican Voters Against Trump released the advert titled “Country First” on YouTube on Thursday morning, and have picked up a little more than 10,000 views at the time of writing.

The campaign spot is largely made up of snippets from McCain’s 2008 Republican National Convention speech contrasted with remarks from President Donald Trump both in office and on the campaign trail.

“A word to Senator Obama and his supporters,” McCain says in the advert’s opening clip “Despite our differences, much more unites us than divides us. We are fellow Americans and that’s an association that means more to me than any other.”

His speech is interspersed with a clip of Trump referring to Mexicans as “rapists” bringing crime into the U.S. at the start of the 2016 presidential campaign.

“In this country we believe everyone has something to contribute, and deserves the opportunity to reach their God-given potential,” McCain is then heard saying. “In the end it matters less that you can fight, what you fight for is the real test.”

The advert closes with an image of McCain and Biden together with the words “country over party” between the pair.

The new attack advert was released as over 100 former McCain staffers signed a statement endorsing Biden’s presidential campaign against the GOP incumbent Trump in a Friday advert set to appear in the Washington Post.

Among the signatories are the late senator’s speechwriter Mark Salter, the GOP strategist Mike Murphy and the Republican Voters Against Trump political director Timothy Miller.

“Given the incumbent president’s lack of competent leadership, his efforts to aggravate rather than bridge divisions among Americans, and his failure to uphold American values, we believe the election of former Vice President Biden is clearly in the national interest,” the group statement reads.

“For those reasons and more, we feel certain supporting Joe Biden is the right decision for our country in this dangerous moment. This is a cause worth fighting for.”

Newsweek has contacted the Trump 2020 campaign for comment and will update this article with any response.

Republican Voters Against Trump said the new advert would largely run on digital platforms, but added that it was also slated to appear on Fox News in Arizona—a key battleground state in the 2020 race.