The poisoning of critic who exposed Putin regime’s corruption 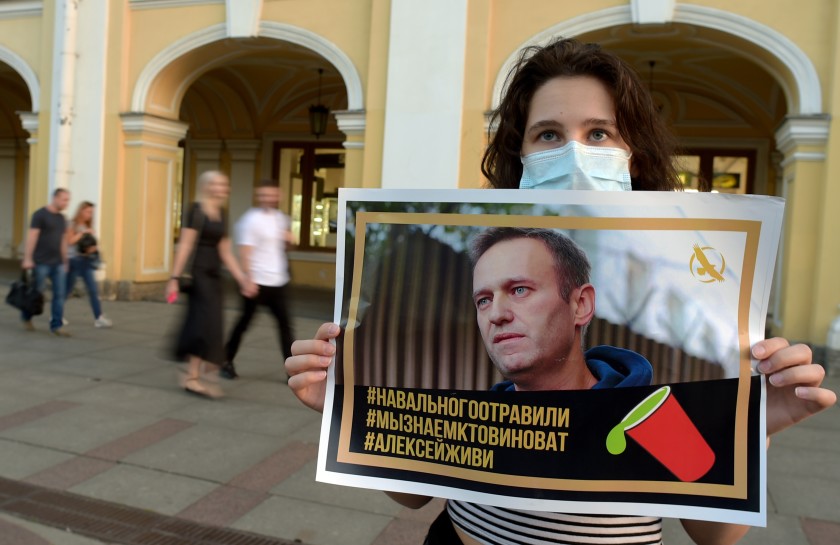 A woman holding a placard with an image of Alexei Navalny expresses support in downtown Saint Petersburg for opposition leader after he was rushed to intensive care in Siberia suffering from what his spokeswoman said was a suspected poisoning.(AFP via Getty Images)
Share:

Russian opposition leader Alexey Navalny was flown to Berlin Saturday morning. He was in a coma after suddenly falling ill on a flight from the Siberian city of Tomsk to Moscow. Physicians in Berlin confirmed the poisoning of yet another Putin critic, and I very much hope not to lose another brave colleague in the fight against Putin’s deadly mafia regime.

Navalny came to prominence as an anti-corruption blogger, using investigation techniques and public documents to expose the incredible scale of looting perpetrated by Russia’s ruling elite. He went on YouTube with photos of the spectacular yachts and mansions owned by Russian politicians with modest salaries. Earlier this year, he said that the new prime minister and his family owned $45 million in properties, even as the Kremlin disputed the source of income. He branded Putin’s United Russia forever as “the party of crooks and thieves.”

This wasn’t the traditional model of opposition figures like Boris Nemtsov and me and our grand rhetoric about democracy and freedom. It was local and concrete—and it worked. The corruption theme struck a chord, especially with young Russians who never knew the Soviet Union and weren’t motivated by ideology. But they knew they were being ripped off, and they were empowered by Navalny and his team’s use of budget documents and investigative know-how to expose Putin’s gang for what they are. He brought a new, young crowd to our coalition movement’s a decade ago.

Of course, Navalny’s success and popularity put a target on his back, as well as everyone in his family and on his team. He exposed corruption, the lifeblood of Putin’s mafia. Navalny has been arrested over a dozen times, attacked with a chemical that left him with permanent eye damage, and his family’s bank accounts have been frozen. His brother was jailed in what was widely seen as a politically motivated case, his group’s offices are routinely raided, as are the homes of his staff, even those of their parents and in-laws. That’s how mafias work.

But Navalny avoided the worst, at least until now. He wasn’t jailed for the long sentences others suffered, or gunned down like prominent investigative journalist Anna Politkovskaya and Boris Nemtsov. He didn’t fall out of a window like so many Russians seem to do—or go into exile like I did. The impression was that the Putin regime was wary of making a martyr of the popular Navalny, that they preferred to harass him and limit the damage.

That uneasy equilibrium ended in agony on Thursday, when Navalny fell violently ill. It may have been something in his tea, but Russian agents have great experience with various methods of delivering toxins. This is the way of dictatorships, of Putin’s in particular, of steady escalation. And please don’t insult my intelligence with theories about rogue elements in a KGB-style dictatorship who may be responsible. As with everything from election interference in the UK and US to a global assassination campaign, no one in Russia would risk attacking such a high-profile target without approval from the very top.

Nor was this a trivial operation. It required real-time information, resources and expertise. The heavy involvement of security forces at the Omsk hospital Navalny was first brought to also suggested direct regime involvement. The doctors initially refused to release him (the head doctor said Navalny was too unstable to be released), and Navalny’s personal doctor said she believed Russian authorities were trying to delay his departure long enough that it would be difficult to detect a substance in his system , which complicates both the patient’s treatment and the investigation into the attack. If the Omsk doctors participated in any unnecessary delaying tactics, they have much to answer for.

Perhaps Putin felt even more impunity than ever after the constitutional changes that confirmed his status as Russia’s eternal supreme leader. Why bother entertaining even token opposition at this point? Maybe Putin wanted to make a big statement in the face of the huge pro-democracy protests in neighboring Belarus, where he is backing his fellow dictator, Alexander Lukashenko. Perhaps he doesn’t think he will face consequences, as with his countless other actions. Dictators don’t stop until they are stopped.

But wondering why Putin might, do this, and why now, is a distraction from the brutal facts and his long track record. I’ve been asked many times, “If Putin is so terrible, why are you still alive, Garry?” My answer, as always, is that anyone asking such a question will simply move on and ask the same of another name, another critic, even if something did befall me. We know what Putin is and what he is capable of. So, don’t ask me or anyone else to explain what just happened to Alexey Navalny. Ask Putin.

And yet, western foreign policy experts and diplomats are still proposing new resets and engagement policies with Putin’s Russia. Last year, we were told that Russia’s return to the Council of Europe would be “good news for Russia’s civil society.” Earlier in the month, dozens of prominent names signed a letter proposing yet another “rethink” of America’s Russia policy after the disastrous Obama-era reset and Trump’s open sycophancy toward Putin. I’d certainly welcome a rethink if it would finally treat Putin’s mafia state like the rogue nation it has become—not one that would recognize Putin as a legitimate leader capable of being a reliable partner in resolving global problems.

Unless you live in a fantasy world in which dozens of critics of a ruthless dictator’s die horribly or fall gravely ill for no special reason, you might see Navalny’s condition as Putin’s response to all these pathetic entreaties. He will do what he wants, kill who he wants, and still expect the leaders of the free world to come back for more instead of isolating him and sanctioning him and his cronies into oblivion.

But he must be worried about the future. Joe Biden’s prompt and strong statement about the attack on Navalny stands out against days of silence from the Trump administration, which belatedly called for a full investigation by Russian authorities. (That is, instead of a full international investigation of the Russian authorities, which would actually be of use.) Putin and other dictators may well be rushing to carry out their to-do lists before someone less compliant sits in the Oval Office.

It cannot happen soon enough, and I pray it’s not too late for Alexey Navalny. In the span of a few months, Putin has confirmed his status as dictator for life and his leading critic has been poisoned. At a moment when everyone is supposed to be wearing face coverings, Putin has removed his mask once and for all.

Garry Kimovich Kasparov is a Russian chess grandmaster, former World Chess Champion, writer, and political activist, whom many consider to be the greatest chess player of all time. From 1986 until his retirement in 2005, Kasparov was ranked world No. 1 for 225 out of 228 months