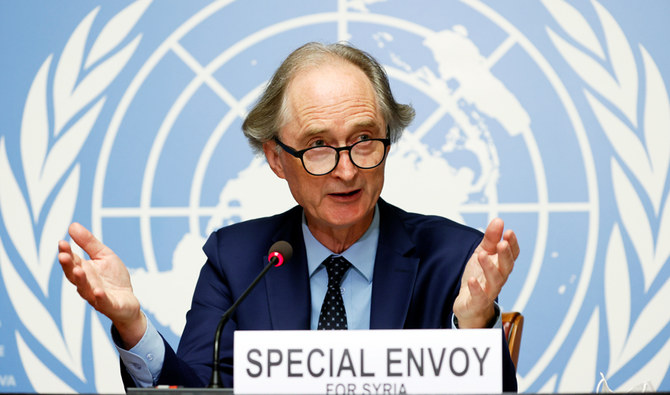 FILE PHOTO: U.N. Special Envoy for Syria Geir Pedersen gestures during a news conference ahead of a meeting of the Syrian Constitutional Committee at the United Nations in Geneva, Switzerland August 21, 2020. REUTERS/Denis Balibouse/File Photo
Share:

The Syrian Constitutional Committee, which began its first session in nine months in Geneva on Monday as part of efforts to find a political solution to end Syria’s war, was swiftly put “on hold” after three members tested positive for COVID-19, the United Nations said.

Hours earlier, U.S. Syria envoy James Jeffrey told reporters that the government of Syrian President Bashar al-Assad had agreed “under some Russian pressure” to take part in the week-long talks.

The session, organised by U.N. Special Envoy Geir Pedersen, is aimed at making progress in drafting a new Syrian charter to pave the way for U.N.-sponsored elections, in line with a stalled 2015 U.N. Security Council resolution.

The office of U.N. Special Envoy for Syria Geir Pedersen did not identify which three of the 45 members of the so-called small body of the Constitutional Committee were infected. One third is nominated by the Syrian government, one third by the opposition, and one third by civil society.

“Committee members were tested before they travelled to Geneva, and they were tested again on arrival, and the wearing of masks and strict social distancing measures were in place when they met at the Palais des Nations,” the statement said.

“Following a constructive first meeting, the Third Session of the Constitutional Committee is currently on hold. The Office of the Special Envoy will make a further announcement in due course,” it said, adding that Swiss authorities had been informed and contact-tracing was under way.

Jeffrey said that the latest U.S. sanctions, under the Caesar Act passed by Congress, were having a “serious political and psychological impact” on Assad and his inner circle.

“So we are going after them in any way we can and after their international holdings, any way that they or their banks touch dollars, they are in trouble,” he said.

But Jeffrey also said, referring to a province in rebel-held northwestern Syria: “I have seen no indication that the Assad regime has given up its dream of a military victory beginning with Idlib.”