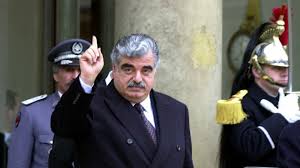 File photo of former Lebanese Prime Minister Rafik Hariri. The Special Tribunal for Lebanon issued a guilty verdict against Hezbollah operative Salim Ayyash for his role in the February 14, 2005 assassination of Hariri. Ayyash to be sentenced on 11 December
Share:

US Secretary of State , Mike Pompeo commented in an article published yesterday following the announcement of Special Tribunal for Lebanon verdict against Hezbollah operative Salim Ayyash for his role in the February 14, 2005 assassination of former Lebanese Prime Minister Rafik Hariri describing it as an ” act of terrorism that also claimed the lives of 21 additional victims and resulted in injuries to 226 others “

Commenting on STL’s statement that it did not find enough evidence that links Hezbollah leadership to the crime , Pompeo said: “Hezbollah operatives do not freelance. Ayyash’s conviction helps confirm what the world is increasingly recognizing—that Hezbollah and its members are not defenders of Lebanon as they claim to be but constitute a terrorist organization dedicated to advancing Iran’s malign sectarian agenda. From Beirut in 1983, to Buenos Aires in 1994, to Bulgaria in 2012, Hezbollah’s terrorist attacks across the world have resulted in the wanton killing of hundreds of people and caused the misery of many thousands more. As the Lebanese people suffer through a crushing economic crisis, Hezbollah’s exploitation of Lebanon’s financial system, its degradation of Lebanese institutions, and its provocative and dangerous actions threaten the Lebanese people and jeopardize Lebanon’s financial well-being and potential recovery. “

He added : “As I have said many times before, Hezbollah’s terrorist and illicit activities in Lebanon and throughout the world demonstrate that it is more concerned with its own interests and those of its patron, Iran, than what is best for Lebanon and the Lebanese people.”

“Although Ayyash remains at large, the ruling underscores the importance of rendering justice and ending impunity, which is imperative to ensuring Lebanon’s security, stability, and sovereignty,” Pompeo added.

Hezbollah chief Hassan Nasrallah vowed not to ever hand over its operative Salim Ayyash to the Special Tribunal for Lebanon.