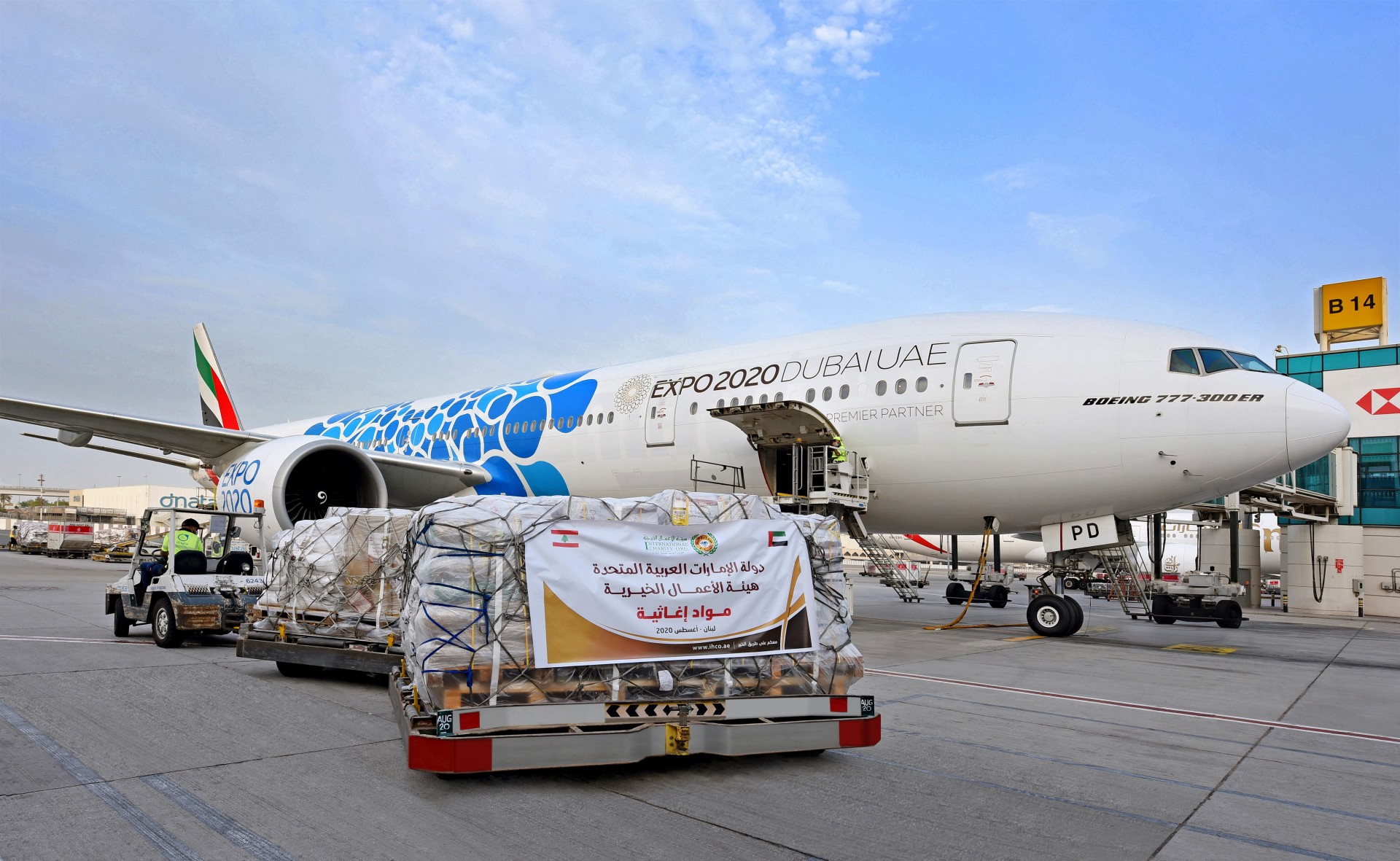 Emirates Airlines launches an airbridge between Dubai and Lebanon. Over 50 flights will be allocated to deliver emergency relief support
Share:

DUBAI, 13th August 2020 (WAM) – In the wake of the Port of Beirut explosions which have devastated many parts of Lebanon’s capital city, Emirates is standing with Lebanon to provide critical emergency relief and aid to the hundreds of thousands of people affected by the blasts. Emirates SkyCargo plans to ramp up its freighter operations to Lebanon by dedicating over 50 flights to deliver much needed airlift to the country.

Emirates is providing people around the world the opportunity to donate cash or pledge their Skywards Miles, through a dedicated, secure and convenient portal via the Emirates Airline Foundation. For the next three months of donations, the Emirates Airline Foundation will in turn directly coordinate shipments of urgent food, medical supplies and other much needed items with a range of NGO partners to ensure donations directly help those affected on the ground in a swift and transparent manner. Work is underway to mobilise recognised humanitarian partners.

For every donation, cargo capacity will be provided for humanitarian organisations to transport critical medical equipment and supplies, food and other emergency relief goods directly to Beirut through Emirates SkyCargo. Additionally, Emirates SkyCargo will further contribute by providing a 20% reduction on air freight transportation charges for approved shipments, underscoring its commitment to expedite emergency relief efforts to Beirut.

HH Sheikh Ahmed bin Saeed Al Maktoum, Chairman and Chief Executive of Emirates Airline & Group said: “Today, the world is banding together to stand in solidarity with Lebanon, providing urgent relief and immediate recovery support to those affected by this tragic disaster. Emirates supports the UAE’s ongoing humanitarian efforts to support Lebanon and is committed to bolster its global emergency response to ensure that it can support organisations which provide urgent care, shelter, food and medical support to the Lebanese people. People from all corners of the globe have been sending their support to Lebanon and we are proud to facilitate a means for them to tangibly and proactively assist the Lebanese people with relief and recovery efforts on the ground during this difficult time.”

Emirates has already been supporting disaster relief efforts in Lebanon through the dispatch of several charter flights carrying food, clothing and medical supplies donated by various grassroots organisations in the UAE.

Emirates is committed to being a strong partner by making a difference and giving back to the communities it serves. Through the Emirates Airline Foundation, the airline supports over 30 humanitarian and philanthropic projects in 16 countries. Over the years, Emirates has supported humanitarian flights in partnership with the Airbus Foundation, and since 2013, Emirates A380 ferry flights have transported over 120 tonnes of food and vital emergency equipment to those in need.

Emirates has been serving Lebanese skies and communities since 1991. The airline started its operations between Dubai and Beirut with a three times weekly service utilising a Boeing 727. Today, Emirates operates two daily flights to Beirut utilising the Boeing 777, with plans to add further frequencies.

The relief effort by Emirates was announced one day after German industrial giant Siemens (SIEGY) said it would provide two mobile gas turbines capable of providing power to 150,000 people, or about 10% of Beirut’s population. The turbines could be up and running within 12 weeks, according to Siemens, which said they will be provided free of charge for a year. The company is also sending ultrasound systems and a mobile X-ray unit for use in hospitals.

Siemens CEO Joe Kaeser announced the relief measures alongside German Foreign Minister Heiko Maas during a trip to Beirut. “We want to provide rapid, focused support to help relieve people’s suffering quickly and with no red tape,” said Kaeser. “Medical systems and electric power are vital here, and Siemens can supply both. As a global company, we feel a clear obligation to support the country and its people in this difficult situation.”

European and Gulf countries have sent aid to help Lebanon manage the fallout from the blast,

French President Emmanuel Macron, who was welcomed by angry crowds during a tour of devastated Beirut neighborhoods last week, hosted an international donors’ conference on Sunday.S

peaking by video conference, Macron told world leaders, including US President Donald Trump, that “the objective is to pool our resources to meet the needs of the population of Beirut.”On Monday, Lebanon’s government stepped down. Prime Minister Hassan Diab addressed the nation, announcing his resignation and that of his government in the wake of the blast, which he called a “disaster beyond measure.”