WHO warns half of health facilities ‘non-functional’ after Beirut blast 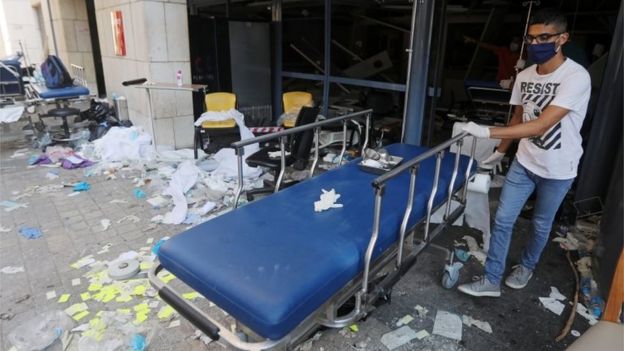 The damage in some areas is extensive and hospitals are among the buildings hit
Share:

The damage caused by last week’s deadly explosion in Beirut continues to hamper healthcare in the Lebanese capital.

The World Health Organization (WHO) assessed 55 healthcare facilities in the city and found that half of them were “non-functional”.

Three major hospitals had to close and three more had to reduce their capacity following the blast.

The WHO also warned that in some facilities Covid-19 prevention measures were not being adhered to.

More than 200 people died and more than 6,000 were injured in the blast, according to the city’s governor Marwan Abboud. The explosion was caused by more than 2,700 tonnes of ammonium nitrate stored unsafely at the city’s port.

On Tuesday, people in Beirut marked the moment the blast hit exactly a week earlier.

There has been outrage that so much explosive material was allowed to be stored in the port. The government resigned on Monday following angry street protests.

What’s the state of the hospitals?

Dr Richard Brennan, the WHO’s regional emergency director in the Eastern Mediterranean, said that they had assessed 55 primary healthcare clinics in Beirut.

Of those, just over half were found to be “non functional”, leaving Beirut short of 500 hospital beds as it continues to deal with thousands of injured residents.

The WHO said its priority was to get those hospitals and clinics that had closed, up and running as fast as possible. Dr Brennan said that to ensure supplies got to those who needed them, the WHO was distributing them directly to health facilities it had identified in its own assessments.

He stressed the importance of restoring health facilities to their full capacity both to treat those injured and to deal with a recent surge in daily coronavirus cases.

What’s the situation with coronavirus?

Lebanon has had 7,121 confirmed cases of coronavirus, according to health ministry figures released on Tuesday. There have been 87 Covid-related deaths.

Dr Brennan praised Lebanon’s response to the pandemic, saying it had done an “impressive job” tackling it.

But he warned that there had been “an uptick in the number of cases prior to the blast”. He added that the country had registered its highest number of daily cases on Tuesday.

“While we have to still continue to respond to the consequences of the blast, we also need to stay vigilant with respect to Covid,” he urged.

He said he thought it was possible to “get on top” of the recent acceleration in cases if the response was stepped up.

What’s the damage in the city?

Hundreds of buildings were destroyed by the blast, leaving parts of the city looking like a war zone. Many historical buildings are among those damaged.

On Wednesday, the authorities announced a ban on the sale of these old buildings to prevent several historical districts from being gutted by developers seeking profits.

The fear is that these traditional homes could be torn down and replaced by high-rise apartment blocks as has happened in other parts of Beirut in the past.

There have also been concerns that Lebanon could soon run low on bread as the silos in the port storing its grain supplies took the brunt of the blast.

But the Lebanese economy minister, Raoul Nehme, tweeted that the country had enough supplies of flour for the next four months.